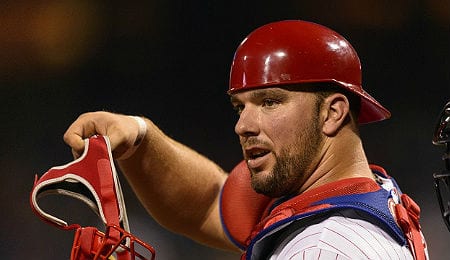 Welcome back you Fantasy fiends, to another wonderful edition of The Wire Troll. If you followed our advice last week, you would have enjoyed Seung Hwan Oh slamming the door shut and earning saves for the Cardinals, Daniel Mengden hurling 7 2/3 innings of two run ball against the Giants, and both Brandon Nimmo and Steven Moya crushing bombs to right field.

Now let’s take a look at some guys sitting on your league’s waiver wire right now that need to be on your roster… that is, if you enjoy winning as much as we do! We also have three young studly prospects that deserve your attention as they inch closer to a promotion to the big leagues.

Cameron Rupp, C, Philadelphia Phillies (ESPN: 5.6 per cent; CBS: 16 per cent): Rupp has been swinging a scorching bat over the past two weeks, batting .353/.421/.706 with three homers and three doubles in his last nine games. He has hit both lefties and righties well all season, and received 19 starts behind the dish in June compared to just nine for Carlos Ruiz. The catcher position has been far too shallow this season to ignore Rupp in any league. And it doesn’t hurt that he’s flashed a very strong arm (see video below).

Lonnie Chisenhall, OF, Cleveland Indians (ESPN: 21 per cent; CBS: 22 per cent): We’re not saying Chisenhall has been hot over the past month, we’re just saying we saw two hobbits throw a ring at him. The lefty is hitting .560 with three homers over his last five games, and a cool .342 BA over the last month. Chisenhall is hustling righties as usual, but has also been respectable in limited time against the southpaws. He has filled in admirably for the injured Michael Brantley and played a large role in the Indians’ recent historic win streak.

Danny Espinosa, SS, Washington Nationals (ESPN: 27.1 per cent; CBS: 40 per cent): As we all know, while it has improved drastically over the past two seasons, the shortstop position is not known for its offensive strength in Fantasy baseball. So how on earth can you pass up on a guy with 15 homers before the All-Star break? Yes, Espinosa’s .230 BA is daunting, but he hit .309 in June, and most impressively has held off the rise of Trea Turner longer than anyone could have expected. As a testimony to Espinosa’s play this season, Turner is actually getting a look in centrefield at Triple-A Syracuse.

Bud Norris, SP, Los Angeles Dodgers (ESPN: 18.3 per cent; CBS: 29 per cent): We’re not going to lie, we did not expect to be writing a waiver recommendation on this guy in 2016, but ol’ Bud Norris is looking a lot like his 15 game winner self from two seasons ago. Over his last five outings, he boasts a 3-0 record with a 1.78 ERA, 0.82 WHIP and a 10.4 K/9. The most exciting news regarding Norris is the trade on Thursday that sent him from Atlanta to the Los Angeles Dodgers after Clayton Kershaw was placed on the DL. If Norris can maintain any sort of resemblance of this torrid pace he’s on, with the additional run support, he could turn out to be one hell of a steal down the stretch.

Brandon Maurer, RP, San Diego Padres (ESPN: 4.1 per cent; CBS: 10 per cent): You know what they say: Never pay for saves. The reason? Come July, a guy like Maurer could be getting you saves for free off the waiver wire. Fernando Rodney, the previous Padres closer, was traded to the Marlins on Thursday. This move left an opening in the San Diego bullpen that many believed would be filled by LHP Ryan Buchter. But when the first post-Rodney save opportunity presented itself Friday, it was Maurer who was sent to the mound to slam the door shut. Maurer owns an unimpressive 5.82 ERA this season, but has struck out 47 batters in only 38 2/3 innings. We don’t believe Buchter will be a setup man for long, but for the time being, it seems as if Maurer is the guy to own for saves in San Diego. You could always do worse….

Jose De Leon, SP, Los Angeles Dodgers (ESPN: NA; CBS: 22 per cent): In his six starts at Triple-A this season, De Leon has looked magnificent, posting a 3.09 ERA while averaging 13.5 K/9. His 2016 season was delayed, partially in order to preserve his innings, which could be a big arrow pointing towards him making an appearance in the bigs this season. With the Dodgers rotation currently decimated by injuries, now may be the time to stash De Leon and his nasty fastball-changeup combination that has completely befuddled the PCL.

Jeff Hoffman, SP, Colorado Rockies (ESPN: NA; CBS: 7 per cent): The prize of the Troy Tulowitzki trade last season, Hoffman is knocking on the door to the Rockies big league rotation. On Thursday, Manager Walt Weiss described Hoffman as being “pretty close.” We would certainly assume he meant it, considering Eddie Butler is rocking an abysmal 6.96 ERA and Jorge De La Rosa is following right behind with a 5.98 mark. Through 16 starts at Triple-A this season, Hoffman owns a 3.46 ERA with a 9.03 K/9.

Hunter Renfroe, OF, San Diego Padres (ESPN: NA; CBS: 14 per cent): Renfroe has been arguably the best player in the minor leagues this season, leading the PCL in hits and homers while slashing .329/.351/.595. He has the offensive abilities to provide Fantasy relevance right now, but unfortunately it seems like it will take either an injury or a trade to free up a spot for Renfroe in the majors. Luckily for us, the trade deadline is right around the corner and Melvin Upton Jr. has actually mustered up quite a bit of trade value this year.

Tyler Naquin, OF, Cleveland Indians (ESPN: 10.2 per cent; CBS: 18 per cent): Like Chisenhall, Naquin has provided a vital spark to the Cleveland fire this season. A 2012 first round pick, Naquin is currently enjoying a .317/.379/.568 line with six homers and two steals for the season. The left-handed hitter only has 20 PAs against southpaws all season, but we will gladly trade away a little playing time in exchange for the sexy numbers he is posting against righties.

By JB Branson
Tags: Bud Norris, Cameron Rupp, Philadelphia Phillies, Seung Hwan Oh, St. Louis Cardinals
This entry was posted on Sunday, July 3rd, 2016 at 5:39 pm and is filed under BASEBALL, Jordan Branson, The Wire Troll. You can follow any responses to this entry through the RSS 2.0 feed. Both comments and pings are currently closed.