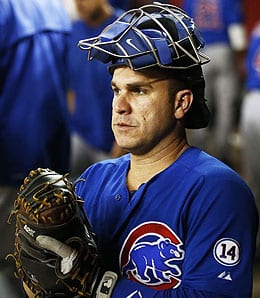 Miguel Montero could provide a nice boost for your team. (Rob Schumacher/azcentral sports)

[Editor’s note: While JB Branson has been helping us at RotoRob.com for a while now with our rankings, this is his first official column, as he takes over the MLB Wire Troll. Please join us in welcoming him.]

Welcome back to The Wire Troll for the Week Six Edition, where we discuss waiver wire recommendations for your season-long Fantasy baseball teams.

Last week we witnessed some amazing things in baseball. The Rockies scored 13 runs — in one inning; Giancarlo Stanton hit a ball that has yet to land (guess that’s not too surprising); Jake Arrieta still has an ERA under 1.00; and Bartolo Colon hit a home run. Yes, we said it, big fat Bart hit his first career dinger at the tender age of 42. Like we said, amazing. Now let’s take a look at some players sitting on the waiver wires in your league that deserve consideration.

Miguel Montero, C, Chicago Cubs (ESPN: 11.4 per cent; CBS: 41 per cent): On the DL since April 25, Montero is eligible to return on Tuesday. The veteran catcher struggled prior to the DL stint, but is still fully capable of reaching his 2015 numbers if the back problems are fully… err… behind him. The Cubs lead the league in runs scored, which will lead to a healthy amount of run and RBI possibilities, which in these days is hard to find at the backstop position. Montero spanked 15 dingers last year and, as you can see in the video below, he can still turn on a pitch — in any language.

Justin Smoak, 1B, Toronto Blue Jays (ESPN: 2.2 per cent; CBS: 6 per cent): Thanks to the 80-game PED suspension handed to Chris Colabello, Smoak has been given a great opportunity to man first base for the offensive giants in Toronto. Smoak has really grabbed hold of this opportunity, and is heating up as of late. Over his last five games, the switch hitter is batting .389 with two homers and a .500 OBP. Smoak is a much better hitter against RHP, which is a good fit for the Blue Jays and their right handed-heavy lineup. As long as he continues to see steady playing time hitting out of the six spot in that filthy lineup, he can be a cheap source of power and RBI.

Chase Utley, 2B, Los Angeles Dodgers (ESPN: 17.6 per cent; CBS: 20 per cent): We’re not going to lie, we did not expect to be writing about this 37-year-old second baseman this season (except perhaps in a eulogy). But, he has been fantastic for the Dodgers in 2016, and now deserves our attention. Utley has started 20 games for his hometown team, all at the leadoff hitter. For the season, he has a ridiculous .398 OBP, which will continue to produce great run scoring opportunities with the likes of Adrian Gonzalez and Yasiel Puig behind him in the order. Now that Howie Kendrick is back and healthy, it may cause a slight dip in Utley’s at bats. However, Kendrick has spent a little time out in LF this season, because as long as Utley is this hot, Manager Dave Roberts will be forced to keep him in the lineup.

Derek Dietrich, 2B/3B/OF, Miami Marlins (ESPN: 6.1 per cent; CBS: 24 per cent): Here we have another case of a gained opportunity after a PED suspension. This time it is the utility man in Miami following Dee Gordon’s 80 game penalty. Dietrich has filled in admirably for the Marlins, hitting .309 on the season. The Fish has been on a nice little tear recently, scoring the eighth most runs in the league over the past seven days, and Dietrich will continue to be a contributing factor in the fun until Gordon returns. Plus, the multiple position eligibility never hurts.

Zack Cozart, SS, Cincinnati Reds (ESPN: 33.4 per cent; CBS: 40 per cent): How are Cozart’s ownership percentages still this low? The dude is batting .341 and has hit out of the leadoff position in each of the 22 games he’s started. Had the 30-year-old not blown out his knee in the middle of a great 2015 campaign, he would not be popping up in waiver wire articles in 2016. But with the injury behind him, and a current healthy status, there is no reason for a solid shortstop to be on your waiver wire. There are not that many of them.

Jackie Bradley Jr., OF, Boston Red Sox (ESPN: 23.7 per cent; CBS: 50 per cent): JBJ has been a pleasant surprise for the Red Sox offensively this season. Many believed he would not be able to keep himself in the lineup because he’s generally been a continuous offensive disappointment the big leagues. However, Bradley is hitting .277 with three bombs and four triples already. As long as he continues to be even somewhat productive at the plate, thanks to his incredible defensive abilities, he should remain in the starting lineup for Boston for the rest of the season. It doesn’t matter where he’s slotted in the batting order, as this is an offense that can produce Fantasy relevance out of almost anyone.

Marcell Ozuna, OF, Miami Marlins (ESPN: 18.9 per cent; CBS: 44 per cent): Barry Bonds may finally be getting through to Ozuna. Over the past two weeks, Ozuna has hit three of his five home runs, and is sporting a cool .341 BA. Two seasons ago, he hit 23 jacks and showcased a promising power stroke, only for it to disappear in 2015. But if anyone is capable of tapping into a player’s power potential, it should be the MLB’s all-time leader in homers. If Ozuna has truly figured things out, this waiver wire pick could provide a hefty return on investment in the power department.

Nathan Karns, SP, Seattle Mariners (ESPN: 16.3 per cent; CBS: 48 per cent): Karns threw a gem Saturday against the Astros, enjoying 6 1/3 strong innings of one run ball, striking out nine along the way. The tough luck no-decision kept him at 3-1 on the year, but dropped his ERA down to a very respectable 3.38. With Mike Montgomery and James Paxton out of the picture currently (although the latter is looking very strong at Triple-A), Karns’ spot in the Mariners rotation is safe. Karns is continuing the success he found last season as a member of the Rays, and is a great source of strikeouts, as he is ringing up more than a batter per inning. If he can improve his command as the season goes on and limit the free passes, he will provide SP3 value rest of season. Get Karns while you still can.

By JB Branson
Tags: Chicago Cubs, Miguel Montero
This entry was posted on Sunday, May 8th, 2016 at 3:57 pm and is filed under BASEBALL, Jordan Branson, The Wire Troll. You can follow any responses to this entry through the RSS 2.0 feed. Both comments and pings are currently closed.