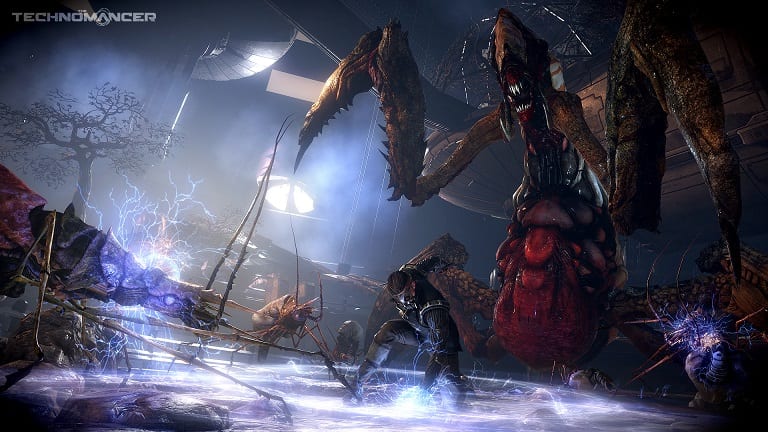 I, for one, welcome our new insect overlords.

The Technomancer is the latest title from developer Spiders, a studio that’s quietly put out a handful of solid, if unremarkable, action RPGs. Armed with a seemingly bigger budget and less technical constraints, can Spiders finally make its mark, or is it doomed to repeat past mistakes?

The controls in The Technomancer are fairly standard for recent third-person action RPGs like the Witcher 3. There’s even a similar active pause menu for when you want to do an action you might not have set to hotkeys. Speaking of hotkeys, this is where the game excels over some other recent entries.

There is a handful of fighting styles in the game depending on the weapon, and the game allows you to equip one of each type. Then, simply holding a shoulder button and pressing the assigned weapon button will switch styles, some of which vary quite a bit. Players that favour hybrid styles of play will be particularly satisfied here.

The Technomancer is a lower budget affair compared to a typical full-price retail release, and it shows. Animations are stiff, and anyone that’s not an important NPC looks like they belong in a game from last generation.

Still, there are some bright spots. The lighting is great, as is the art design of the cities, with their monolithic buildings that almost seem created by religious fanatics rather than Martian settlers with superpowers and an advanced military.

On the presentation side, the fantastic soundtrack stands out the most. Part Mass Effect and part John Carpenter, the various tracks often masked some of the more mundane realities of the game. Voice acting and sound effects, however, are a mixed bag.

In particular, we didn’t much care for the main character, and a few others are quite hammy as well. Sound effects lack sufficient impact, which is disappointing given the limited move sets — unquestionably some satisfying crunch when smacking an enemy could’ve led to more interesting combat.

Zachariah is a young technomancer — which is sort of like a mage, though one limited to electricity-based powers — that just graduated from training. In the game, Mars has been settled by Earth, but a mysterious catastrophe cut the two planets off, and Earthlings are essentially revered as a wise group. Here, you’ll control Zachariah as he’s swept up in a race to recover powerful relics they left behind.

The Technomancer’s basic plot takes quite a while to get going, with the opening occurring within a single town as the player acts as an obvious tool in the machinations of more important characters. Eventually you will get to set off, but the opening is an absolute slog that will likely put many players off.

Despite the town being large there’s very little to do in it, with the various quest givers miles apart and wanting you to do copious backtracking. There are many chests to loot, but they often offer uninteresting treasure, just more crafting and vendor fodder.

Still, if you can struggle through the early stages, there’s some interesting stuff. The world itself is surprisingly well realized in an eerily dystopian way. Characters ask what corporation you’re from rather than what city, and everyone’s last name is their job title — like Labour for workers, Goodman for merchants, and even criminals adopting the last name “Rogue.” It’s almost amusing and actually sort of scary in that it doesn’t seem outlandish.

There are four skill trees, three falling into typical archetypes, with the fourth being a warrior/monk wielding a bo-staff. Each has its own unique play twists, like the rogue’s superior dodge, the warrior’s ability to block and so on.

Unfortunately, the mage tree primarily supports one of the weapon styles as you won’t ever have enough resources to just cast spells, and so the game really favours exploring at least two of the skill trees. In fact, you can actually get all of the abilities in one tree before leaving the first town.

This is one of the big problems with The Technomancer: combat often lacks variety. You unlock abilities so quickly that an encounter against enemies at the end of the game doesn’t really feel markedly different than one at the start.

Combat is ultimately what’ll make or break the game for most players. It’s never very interesting and doesn’t exceed competence even at its heights. There isn’t enough variety in enemies or tactics required to defeat them, and it can often feel a bit cheap if you’re targeted by ranged attackers on some of the higher difficulties.

You do have some AI companions, but they mostly just serve as distractions. They get themselves killed quite easily and despite having behaviours you can set, that guy with the rifle you’ve told to stay at a distance and shoot will somehow find himself in melee combat.

One nice touch we really liked was the morality system. When you defeat human enemies, they’re not dead, but they can be drained to get a little extra loot from them. It gives a little more control over quests and building your character. This functions in the general quests as well as when Zachariah must choose between being a willing tool of the army or more sympathetic to the repressed masses.

There’s some charm to be found in The Technomancer. The world is interesting, and the story has its moments. While combat is fairly dull, if you can look past that there’s something worth exploring on Mars.

By Brian Gunn
Tags: Focus Home, Spiders, The Technomancer, Video Game Review
This entry was posted on Saturday, July 2nd, 2016 at 4:17 am and is filed under Brian Gunn, Video Game Reviews. You can follow any responses to this entry through the RSS 2.0 feed. Both comments and pings are currently closed.