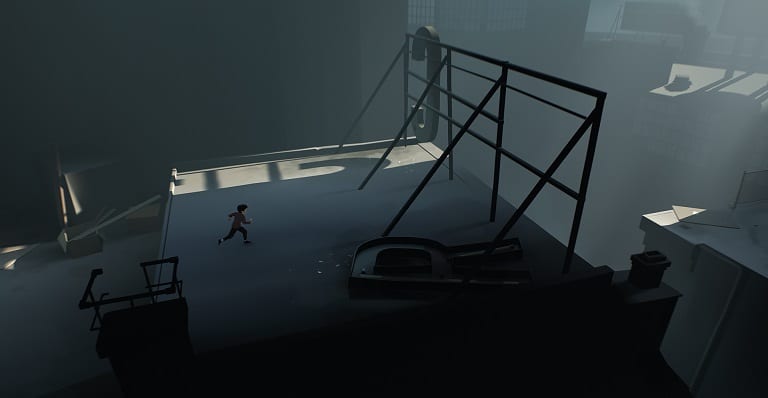 Presentation wise, INSIDE is thrilling.

Back in 2010, Playdead effectively turned the gaming world on its ear when its debut effort, LIMBO, hit the Xbox 360 as part of the Summer of Arcade promotion. Its monochromatic, tension-filled world was presented with no exposition, and it was met with nearly universal acclaim. Now, Playdead is finally back with its spiritual successor, INSIDE, an experience that’s every bit as chilling and unique.

Elegant and intuitive, INSIDE employs only the left analog stick and two face buttons: one to jump, and the other to grab objects. Once you’ve latched on you can do a number of basic activities — pull, push, swing, etc. — and it’s almost always immediately obvious what you can and can’t do with an object. It’s deliciously simple.

Although Playdead uses more than just black and white this time, the game still heavily focuses on those colours along with other washed out tones. The lone exception is your character’s red shirt, which is reminiscent of Schindler’s List. World design and art style are beyond reproach, starting from the moment you slide down that first hill and into a dark forest.

As visually intriguing as LIMBO was, INSIDE cranks everything up a few notches. Backgrounds are now 3D, even though you still move laterally on a 2D plane, and the way things enter from those areas create some of the game’s most heart-pulsing moments. There’s also a tremendous sense of scale as you progress with massive structures towering above all. The visceral nature of your demise is unapologetic as well, and it feels rawer than more intrinsically violent titles.

Minimalism is the name of the game on the audio side with only occasional bursts to pierce a largely silent soundscape. It’s highly effective in creating a sense of isolation, and it makes those times when a dog’s ferocious bark rings out all the more intense.

Here are the broad strokes: you’re a boy being pursued/hunted by an unknown group of people that are doing some kind of experiment on another group of people. Who they are, why they’re doing it, when and where this takes place, and how you got involved are unclear — and, for better or worse, they will remain so for the duration of INSIDE.

While this has its advantages on a macro level, it would’ve been nice if some of the game’s set pieces were put into context at some point. One sequence tasks you with covering an extended stretch of ground that’s being hammered by some sort of pulse. You have to get behind something before a pulse resonates or you’ll literally be blown to bits. What was it for? Who knows? It looked cool and made for a tough puzzle, and that was enough for the developers.

Beyond that, our only other issue is that there’s a right way and a wrong way to complete many of the puzzles, which leads to a lot of trial and error during progression. While that’s a tried-and-true formula for games, it hurts INSIDE’s air of foreboding. For instance, the first time a dog is set upon you it can be exhilarating. However, by the fifth time — after figuring out what didn’t work — it loses its luster.

Of course, part of the reason for initial failures is that INSIDE does a marvelous job of not recycling its puzzles and, by extension, its solutions. Sure, some elements are reused — such as blocks that propel upward upon activation — but always in new ways. It’s incredibly refreshing not to see the same things pop up repeatedly, and that really drives the gameplay in what’s an abbreviated experience.

We’re hesitant to reveal much more, as INSIDE is one of those games that should be played with as little information going in as possible. To that end, we’d strongly advise against using videos. Even when factoring in solving the puzzles organically, you’ll still probably clear the game in 2-to-3 hours. Don’t let that dissuade you. INSIDE is worth every penny.

Clear a few hours, sit down and play INSIDE start to finish. Despite its ambiguity and reliance on trial-and-error progression, it’s is a wonderful game that everyone should experience.

By HC Green
Tags: INSIDE, LIMBO, Playdead, Video Game Review
This entry was posted on Thursday, June 30th, 2016 at 3:01 pm and is filed under Herija Green, Video Game Reviews. You can follow any responses to this entry through the RSS 2.0 feed. Both comments and pings are currently closed.