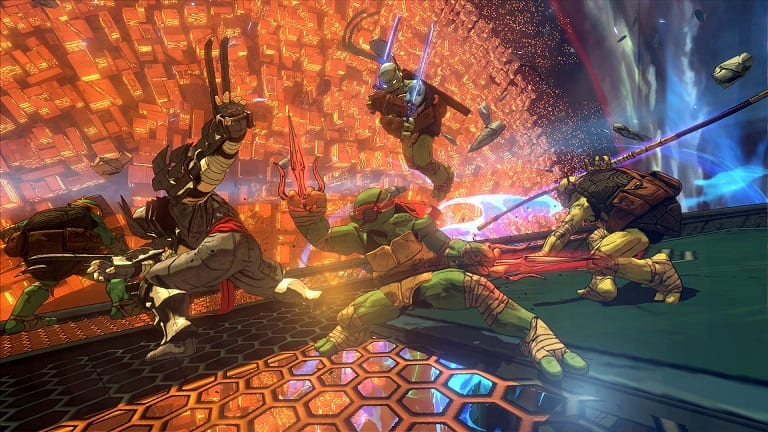 Tonight they dine on Shredder soup.

With another Teenage Mutant Ninja Turtles film in theaters — strangely enough using the same name (Out of the Shadows) as the widely panned 2013 video game — it’s no surprise there’s a new game to accompany it. Mutants in Manhattan, from developer PlatinumGames (the folks behind the Bayonetta games and, more recently, Transformers: Devastation), is another TMNT hack n’ slash, albeit one missing a critical component.

Combat largely boils down to unleashing light and heavy attacks, blocking strikes and avoiding incoming projectiles. It sounds straightforward enough, but it doesn’t get it quite right. The problem is in the blocking as holding down the left trigger causes you to spin around on your shell, deflecting would-be attacks. Hold it down too long, however, and you’ll be staggered, making you vulnerable.

While it makes some sense to dissuade just blocking indefinitely, the meter drains really fast, and when you’re fighting multiple enemies at differing ranges it becomes a frustrating chore to try to keep them from hitting you. If you release the button at the right time you can parry an attack, and there’s also a way to jump on the back of larger enemies and deliver a pounding.

In addition to your basic attacks you’ll have four customizable (and upgradable) turtle powers at your disposal. Examples include basics like stronger combos and shell charges, support functions like reducing cooldown times and healing, and exotics like summoning several small UFOs to circle and shoot your enemies. The number of options is admirable, but it sure feels like the cooldown is excessively long.

Shurikens are thrown with the right bumper, and they can also be aimed if you hold down the left. They can be effective against flying enemies — which are by far the most annoying in the game — but do little damage. You’ll also pick up items as you go, and these can be consumed by tapping the d-pad in the corresponding direction. Pizza and energy drinks make sense, but when you drop a laser cannon or proximity mine it feels decidedly non-TMNT.

Good news: the turtles themselves and other signature villains (Shredder, Bebop, Rocksteady, etc.) are well rendered in the game’s cel-shaded aesthetic. Bad news: the enemies are generic and repeat a lot, and the levels are almost all uninteresting. It’s particularly bad with the pseudo “open-world” city sections and sewers, and even the TCRI building is fairly bland. It doesn’t help that in the game’s 4-to-5 hour lifespan you revisit most of the levels.

Voice acting is decent enough for the cut scenes and the sound effects of dishing out and receiving punishment are solid, too. April’s incessant jabbering during levels gets old fast, however, as she’ll make the same handful of remarks repeatedly — it’s at its worst when descending the sewers through floor after floor after floor of yawn-inducing repetitiveness.

Shredder and Krang are up to something, and it’s up to the turtles to stop it. That about sums up the plotline of Mutants in Manhattan’s nine-level journey as each stage is treated as a separate entity, complete with its own boss, and you’ll always be tossed back to the lobby after completing one whether you’re playing alone or online with others.

Most levels employ a similar setup: walk around, fight generic baddies, disarm this, protect that and so on until a meter fills that says you’re ready to face off with the boss. Some of the later levels change this up — an elevator that keeps filling with waves of enemies, rematches with previously defeated bosses — but the game rarely deviates too far from the path. It’s also worth noting that the game pads its length by giving enemies and bosses a ton of health.

When it’s working, the game can be a satisfying hack n’ slash. When it’s not, it’s a frustrating slog in which enemies trap you in damage-dealing loops, knocking you down and quickly draining your health. Once you’re knocked out, teammates can revive you. If they don’t reach you in time, you’ll be transported back to the lair for a pizza-eating mini game that’ll determine how much health you return with.

There’s an upgradable component as well. New turtle powers and upgrades of existing ones are locked based on your level, which goes up by finishing missions. This allows you to customize your loadout to a degree. You’ll also collect charms, which can be equipped to grant buffs or give supplementary skills — the homing shuriken is easily our favourite.

While Mutants in Manhattan isn’t a great game, it’s actually fairly enjoyable with other players, which makes this next bit all the more upsetting: there’s no local co-op. Turtles games are built around getting four people together and fighting the Foot, and not surprisingly it suffers markedly as a solo experience since the A.I. tends to target you over the computer-controlled turtles.

If you’re a fan of the turtles and know some people that’ll join you online, Teenage Mutant Ninja Turtles: Mutants in Manhattan can be pretty fun. If you prefer to play solo, however, you’ll be hard pressed to get enough out of it to justify the price.

By HC Green
Tags: Mutants in Manhattan, Teenage Mutant Ninja Turtles, Video Game Review
This entry was posted on Wednesday, June 15th, 2016 at 12:54 am and is filed under Herija Green, Video Game Reviews. You can follow any responses to this entry through the RSS 2.0 feed. Both comments and pings are currently closed.