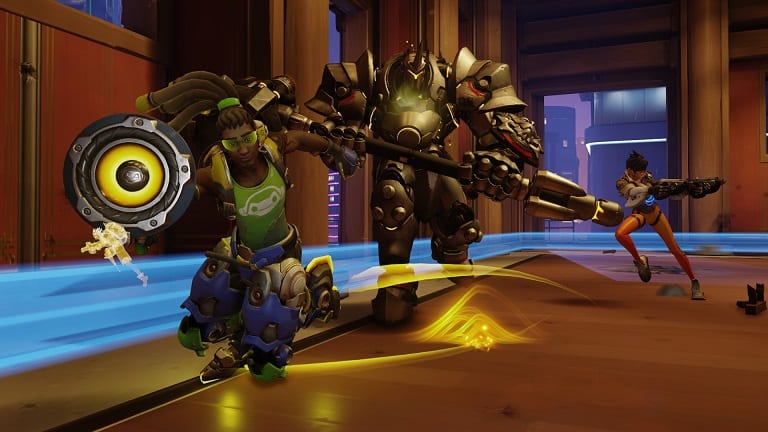 Since it’s been far too long since Team Fortress 2 has had any serious, direct competition, Blizzard decided to shape a unique but identifiable experience in the form of Overwatch. Pick a hero, wave at your teammates and get on the bloody objective! It’s a basic concept with brilliant execution.

While the default look sensitivity might be a notch or two high, Overwatch offers unlimited customization of your control scheme — for each character, too. So, if you want to be a spinning death hammer, crank Reinhardt’s horizontal sensitivity to the max and spin2win, baby. Maybe you need to fine tune your shots as Widowmaker, so lower your overall sensitivity to keep your opponents’ heads in sight.

Although the entirety of the control map is customizable, the defaults are simple to get used to and base your alterations off of. For example, with Genji we liked to have our jump bound to a shoulder button, so that we can jump and attack without taking our thumb off the right stick.

To activate a hero’s power you can press L1 or R1, with basic and alternative attacks being accessed with the triggers. Some characters have an alternate weapon that they can switch to by tapping right on the d-pad — like how Torbjorn can switch between his MagmaShot and his hammer.

It can be a tad awkward getting used to switching on the fly, especially during a particularly intense scrum, but if you don’t like it you can always change it. By default, activating your hero’s Ultimate ability is done by pressing triangle when you’ve filled the special gauge.

Simply put, Overwatch is an astounding looking game. At first glance, it doesn’t appear to push any sort of technical boundaries, but then you start to notice little things like Symmetra’s flowing, silky black hair bouncing playfully as she moves, or Zenyatta’s charms idly spinning.

Each character in Overwatch is accurately designed to reflect the type of player behind them. For example, the Tank character Reinhardt is an old German man who basically lives in a gigantic metal suit that houses a shielding unit to protect his friends, whereas the Attacker Genji features a much sleeker design, fit for running up walls and getting the drop on unsuspecting foes.

The game will absolutely melt your screen when several ultimate moves are going off simultaneously without ever dipping below 60fps (we’ve heard of dips on console but haven’t fallen victim). The stage design is top notch as well, not to mention meticulously balanced (this is Blizzard we are talking about). Some stages feature much more animated vibes to them, but each one shines brightly in its own way (looking at you Route 66).

Hero voiceovers are as unique as their visual representation. Not only is it easy to grow attached to your favourite characters, it’s also fun hearing the pre-match banter between them. Sometimes Soldier 76 will remark to Pharah, “Your mother would be proud.” To which she replies, “You didn’t know my mother all that well, then.” It’s little details like this give all the characters so much more depth than is apparent up-front.

After completing a short tutorial and perhaps a few practice matches against the AI (thank you, Blizzard!), you’re completely ready for the 6v6 mayhem ahead. Overwatch features three different modes and one hybrid mode:

Right now there are 21 characters available to play, with more on the way. Each character fits into one of four categories: Offense, Defense, Tank and Support. That’s not to say you can’t use a tank to attack, but when the combat changes as swiftly as it does in Overwatch you’ll be very happy for hero versatility.

After you die or run back to base, you can switch who you want to be, creating a constant battle of counter-heroes, which promises that most matches you play will be intense.

Not only does Overwatch consist of solid, finely tuned game modes and wonderful characters, it also features a wealth of unlockable options for the heroes, be it additional skins or new lines of dialogue. Ultimately, Overwatch is a game that belongs in your collection.

By Jeff Cater
Tags: Overwatch, Video Game Review
This entry was posted on Monday, June 13th, 2016 at 6:05 pm and is filed under Jeff Cater, Video Game Reviews. You can follow any responses to this entry through the RSS 2.0 feed. Both comments and pings are currently closed.