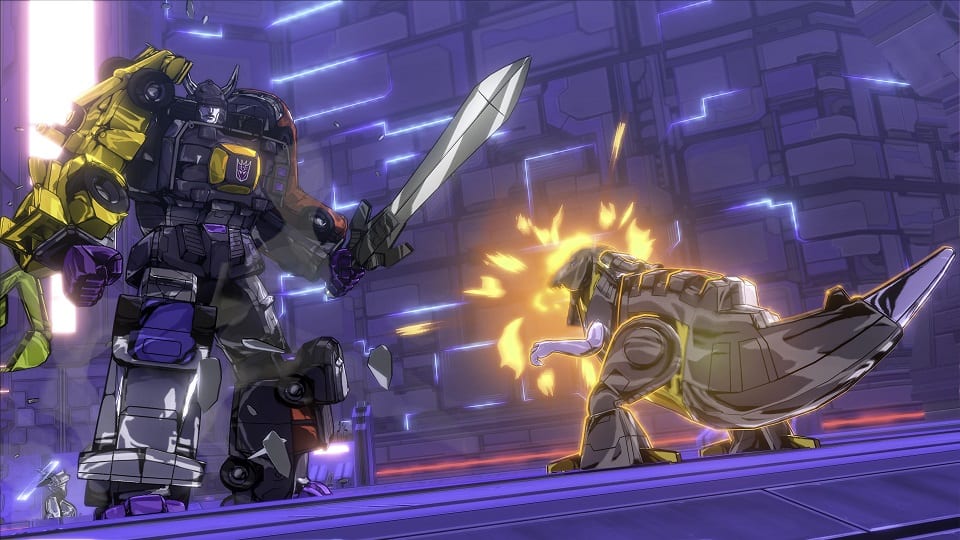 Me Grimlock no afraid of Menasor!

In recent years Activision’s Transformers series has been helmed primarily by High Moon Studios, which did a fabulous job melding the Michael Bay creations with the toy line’s cartoon roots. The last effort came from developer Edge of Reality, however, and Rise of the Dark Spark appeared to effectively squash any future installments in High Moon’s story arc.

Suddenly ripe for a reboot, Activision turned to PlatinumGames, the folks behind Bayonetta, and sent the robots in disguise back to their G1 origins. The result is Transformers: Devastation, a dramatic transformation (pun intended) for the series that focuses on hand-to-hand combat while dishing out heaping portions of fan service.

While each Transformer boasts four weapon slots (one melee, two ranged, one open), Devastation is built primarily on melee fighting. Decepticons tip their attacks via a number of chevrons, and ideally you’ll want to tap the dodge button (right bumper) at just the right time when you not only avoid their attack but also slow time for your own counterattacks.

Strikes are assigned to two face buttons, allowing for combinations — get all the way through one and you’ll be prompted to unleash a “vehicle attack” for added damage. Ranged weapons are used with the triggers and are primarily effective against flying enemies or simply to deal a little extra punishment after a combination. Aiming down the sight feels slower than normal, and it makes hitting fast-moving targets at range occasionally problematic.

Switching between robot and vehicle mode is done by holding down the dodge button. Once you build up speed you can burst out with a melee strike that knocks back your enemies, opening them up for a follow-up hit. Things sometimes move too fast when driving, especially when you hit the boost rings, and it’s more like you’re along for the ride than actively controlling the car. When used as a supplement in combat, however, it feels like the proper pace.

Let’s get this out of the way: seeing the assorted Autobots and Deceptions perfectly recreated in all their G1 glory is essentially a wet dream for someone that watched countless episodes of the cartoon. The way they look, move, transform and combine is spot on, even if Megatron turns into a tank instead of a Walther P38. There isn’t much going on in the backgrounds, however, and the fact that the game takes place in just a couple of locations doesn’t help matters.

Voice acting is good with original performers like Peter Cullen (Optimus Prime) and Frank Welker (Megatron/Soundwave) reprising their roles. Some of the newcomers don’t fare as well. Starscream is a mediocre impersonation of an iconic voice, and others, such as Thundercracker and Shockwave, just sound wrong. Music and sound effects are good.

Like any worthwhile episode of Transformers, Devastation has Megatron attempting an insane scheme that will have disastrous effects on Earth and its flesh creatures. This time, he has located an object that has the power to “cyberform” the planet, turning Earth into another Cybertron. Once again it’s up to Prime and his band of Autobots — Sideswipe, Grimlock, Wheeljack and Bumblebee — to stop him and save the human race from extinction.

Each of the game’s seven chapters is broken up into bite-sized missions in which you tackle a Decepticon threat and are subsequently graded from D to SS based on your performance with factors like how much damage you took and how stylishly you took down your foes factoring into the equation. While there isn’t a ton of diversity to what you’ll be doing, as you progress you’ll find a rhythm for the combat and start feeling more comfortable mixing up your attacks.

Based on the length of Chapter 1 you might think this is a long game. It isn’t. Devastation is quite short, and that, combined with uninspired level design, checks in as its weakest point. Length can be added by playing on the highest initial difficulty setting, but it’s a massive jump from the middle setting, giving enemies huge life bars and allowing them to deal lots of damage. This turns the many boss fights into lengthy encounters that drain much of the fun out of them.

In addition to the main missions, there are also sub-missions to locate and complete. As you finish the story you’ll unlock challenge missions, which are pure extensions of what you’ll be doing throughout the campaign: fight Decepticons, get graded and earn rewards. There are a few interesting bits here, such as unique combinations of boss Decepticons, but it’s ultimately more of the same.

Rewards consist of new weapons, items and credits. Weapons can be synthesized to create new, more powerful variants, and T.E.C.H. (character buffs) are made by Wheeljack via a mini game. You can also use the credits to improve your Autobots’ stats and purchase new moves.

Although Bayonetta and giant robots may seem like an odd mix, Transformers: Devastation proves to be a lot of fun. Even more than that, however, it’s an incredible rush of nostalgia by bringing the original version of these characters to life. This is a no brainer for old-school Transformers fans.