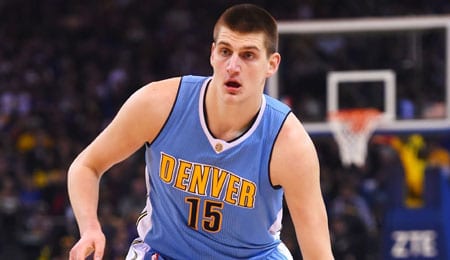 Nikola Jokic emerged as one of the top rookies this season. (espn.go.com)

The 2015-2016 NBA regular season is in the bag and so are most of your Fantasy leagues. We hope our recommendations in The Wire Troll this season kept the competition fierce and perhaps even scored you as the victor. Let’s take a look at our biggest hits from this season.

Jamal Crawford, SG, Los Angeles Clippers: Crawford appeared twice in our Wire Troll this season, but only needed one appearance for Fantasy players to take notice at what kind of potential he would flash coming into this 2015-2016 season. Those who were lucky enough to grab him early on surely benefited from his scoring outbursts that definitely would have your team in the points and three point categories. In his 16th season, the vet showed no signs of slowing down, averaging 14.2 points, 2.3 assists, 1.8 rebounds, 0.7 steals and 0.2 blocks. On a rocky Clippers roster that faced injuries and rotation struggles all season, the Sixth Man of the Year did what he always did best — score the basketball (as opposed to his defense, exposed in all forms of reality as you can see in the video below).

Jeremy Lin, PG, Charlotte Hornets: Lin headlined the Troll back in mid-December, showing us glimpses of Linsanity while providing solid energy and production on and off the bench. The reserve combo guard found a way to play with and compliment teammate Kemba Walker again this season, helping the Hornets clinch a playoff spot and offering owners some deep roster production.

Nikola Jokic, PF, Denver Nuggets: Jokic appeared in the Troll late-November. After a slow start to the season (arguably because of usage), he emerged as one of the top rookies in the league, finishing with averages of 9.9 points (on 51.2 per cent shooting), seven boards, 2.4 assists, and one steal in just 21.7 minutes. The key takeaway: Jokic averaged 16.5 points, 11.4 rebounds and 3.4 assists in 10 games when he played 30-plus minutes. Keep in mind that this kid is only 21, so could very well have a breakout season in 2016-2017.

Mirza Teletovic, PF, Phoenix Suns: Teletovic was first featured in our Troll in early-January, and then returned to headline it just over a month later. When Markeiff Morris left Phoenix, it opened an opportunity for Teletovic to let loose on the offensive end. The second half of Teletovic’s season really gave Fantasy owners something valuable for their teams. Off the bench he had multiple 20-point-plus scoring nights — including six of them over his last seven games of the season — while providing solid board contributions from time to time as well.

Gorgui Dieng, Minnesota Timberwolves: Dieng made his lone appearance in the Wire Troll this season back in late-November. That’s usually an indication of a player catching both fire and Fantasy notice — which is exactly what happened. Even playing alongside beastly Rookie of the Year Karl-Anthony Towns, Dieng found a groove this season, setting a career high with 10.1 points per game. We’re hoping Dieng will continue to expand his offensive repertoire seeing time at the both the four and five, and improve his defense for what should be an exciting season of growth in 2016-2017 for Minnesota.

Bismack Biyombo, Toronto Raptors: We recommended Biyombo a couple times this season in this column as he brought forth a strong defensive presence not just for the Raptors but for Fantasy owners as well. Those who had the roster space to stash Biyombo enjoyed a nice boost in rebounding and blocks. The absence of Jonas Valanciunas halfway through the season gave Biyombo a chance to shine as the temporary starting centre. Biyombo came through with some monster efforts, setting a franchise record with 25 rebounds in a game and notching a career-high six blocks in another game. His owners were surely happy to receive those punches on the stat sheet.

Now it’s your turn. Let us know in the comments below who your favourite Fantasy basketball waiver wire picks of the season were.

By Adrian Wallace
Tags: karl-anthony towns, Kemba Walker
This entry was posted on Sunday, May 15th, 2016 at 3:09 pm and is filed under Adrian Wallace, BASKETBALL, The Wire Troll. You can follow any responses to this entry through the RSS 2.0 feed. You can skip to the end and leave a response. Pinging is currently not allowed.