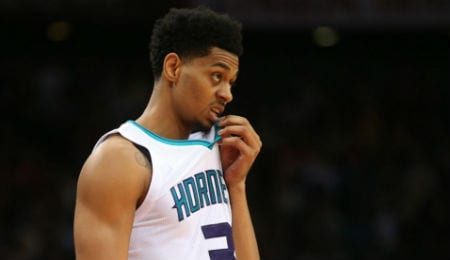 Jeremy Lamb is finally coming into his own. (Businessinsider.my)

Welcome back to another week of Fantasy basketball action. As we approach the end of November, you should have a good idea by now who the “top dogs” are in your leagues (kudos to you if you are the top dog — you’re welcome, by the way). If you’re not, don’t worry… our waiver wire picks will help you climb that ladder.

This week, The NBA sent all its players home for Thanksgiving, leaving viewers and fans all over the world with blank schedule Thursday (how dare they get the day off?); Milwaukee Coach Jason Kidd was suspended on Wednesday for aggressively confronting a game official (slapping the ball out of his hands); and the Warriors stay golden (at 17-0), still undefeated.

Jeremy Lamb, SG, Charlotte Hornets (ESPN: 26.7 per cent; CBS: 43 per cent): In the offseason, the Hornets acquired Lamb, who made a quiet and unceremonious departure from Oklahoma City. Projected to do great things as a Thunder cat, the UConn prospect just never really got the chance to shine in a deep and talented Oklahoma City rotation. In Charlotte however, Lamb’s been making his game speak for itself. With consistent minutes, he’s showing to be quite the worthy sixth man as he’s scored double-digits and grabbed a bunch of boards over the last four games, even leading the team with 18 points against the Wizards on Wednesday. Hell, Lamb is even showing some sweet hops (see video below). You should definitely look at him if you need an infusion of scoring, as he looks to spark his career for a team inching to get back in the playoff mix.

Jerryd Bayless, PG, Milwaukee Bucks (ESPN: 22.7 per cent; CBS: 46 per cent): Though he comes off the bench as the backup point guard, Bayless has seen at least 30 minutes over the last three games, scoring double-digits in each. It seems he’s been outplaying starter Michael Carter-Williams recently, and proving to be efficient when given steady minutes. With Carter-Williams struggling to produce consistently, Coach Kidd might reward Bayless with more minutes and responsibility, so if you need some scoring, at least a couple treys, assists and steals per game, give Bayless a look.

Luis Scola, PF, Toronto Raptors (ESPN: 21.7 per cent; CBS: 37 per cent): The Raptors’ frontcourt has seen a lot of Wire Troll love recently as Argentinean vet Scola becomes the third Toronto forward to be recommended in the last two weeks. With Jonas Valanciunas (hand) out for at least five more weeks, Scola has been consistently racking up double-digit points while adding some boards and taking a steady number of threes per game. If you’re in need of a points and rebound combo, Scola is your guy.

Dante Cunningham, SF/PF, New Orleans Pelicans (ESPN: 0.5 per cent; CBS: 1 per cent): This is a flier pick — especially in DFS formats for Saturday, given that Anthony Davis had to come out early Friday with a knee contusion. Assuming The Brow can’t play Saturday, Cunningham — who has pretty much been off the Fantasy radar for a couple of years — has a chance to see big enough minutes to be a very sneaky pick. Cunningham has already regularly been seeing at least 20 MPG, but with even more PT, he could be in for a very big rebounding performance if Davis is out.

Kosta Koufos, Sacramento Kings (ESPN: 11.8 per cent; CBS: 27 per cent) We last recommended Koufos in early-February and it was a solid choice as he wound up sinking more buckets that month — a trend that continued for the remainder of the 2014-15 season. Now, he’s received two consecutive starts in place of DeMarcus Cousins (back), flirting with a double-double Wednesday and securing one on Friday. Koufos is the perfect short-term grab for points, rebounds and occasional double-doubles, and may even be worth owning down the stretch even as a reserve in deeper leagues.

Nikola Jokic, Denver Nuggets (ESPN: 16.8 per cent; CBS: 45 per cent): The 6’10” rookie has seen some erratic minutes lately playing in the midst of Denver’s injured frontcourt. For the most part, Jokic has been making the most of it with a double-double on Sunday (his second in three games) and 16 points on Tuesday. As long as he’s starting, he’s worth owning as he’ll contribute points and boards to your team. Now, if Jokic can just learn to stay out of foul trouble, but such is life for young bigs in the NBA.

By Adrian Wallace
Tags: Charlotte Hornets, fantasy basketball, Jeremy Lamb, NBA
This entry was posted on Saturday, November 28th, 2015 at 5:57 pm and is filed under Adrian Wallace, BASKETBALL, The Wire Troll. You can follow any responses to this entry through the RSS 2.0 feed. Both comments and pings are currently closed.