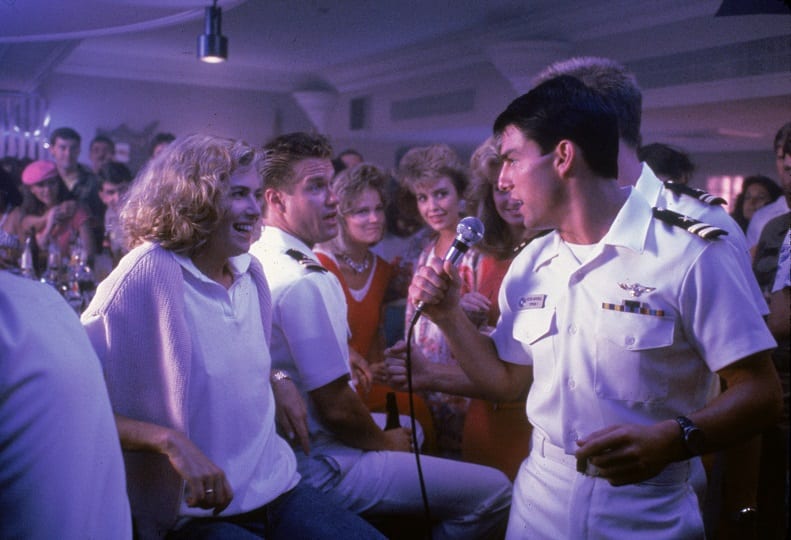 For reasons we truly can’t explain, we’re very familiar with Top Gun. And we say that despite being reasonably certain we hadn’t seen it this century, have never owned it on any format and don’t really recall watching it growing up more than once or twice. Apparently, the adventures of Pete “Maverick” Mitchell and Nick “Goose” Bradshaw left an indelible mark on our subconscious, or perhaps our parents secretly played it for us on a loop while we slept.

Either way, 2016 marks the 30th anniversary of Top Gun, a film that historians might actually consider the genesis of the bromance. To celebrate, Paramount is releasing a special Steelbook Edition on Blu-ray. So it’s time to feel the need… the need for speed.

Led by Viper (Tom Skerritt), the lead instructor who flew with Mitchell’s father, and Jester, they’ll battle it out with other top pilot teams in a series of exercises designed to determine the literal best of the best. It’s here Maverick encounters Iceman (Val Kilmer), who immediately emerges as Mitchell’s main rival for aerial supremacy.

On the ground, Maverick becomes enamoured with Charlie Blackwood (Kelly McGillis), who happens to be a civilian instructor that analyzes flight scenarios. Can Maverick balance his ambitions as a pilot with his burgeoning emotional attachment to Charlie, or will the pressure cause him to crash and burn?

Back before CGI was a thing, filmmakers had to actually get really talented pilots in the air and have them do some damn impressive flying. Having the whole thing grounded in reality really helps it hold up three decades later, and you just feel like if the film were made today, the jets would have to be doing an obscene number of CGI barrels rolls and scraping wings on cockpits or something like that.

There are plenty of good actors in Top Gun, led by Cruise and Kilmer, even if the latter has a supporting part. And while the story isn’t particularly in-depth there’s still enough to move things along. It strikes a good balance between bravado and emotion, though not with a lot of subtlety, and ends up delivering a well-paced and enjoyable film.

Seeing the entire thing remastered into high-definition goodness proves to be interesting, and it’s actually quite refreshing to see how much more authentic even the actors looked — Cruise basically has a unibrow and teeth that clearly had major work done on them later. Oh, and seeing Oceanside, where we grew up, circa the 1980s with the famous “Top Gun house” is pretty cool, too.

Has enough time passed that we can acknowledge how bad some of these soundtracks were? Look, we get there’s probably nostalgic value in Kenny Loggins belting out Danger Zone, but when it swells up for like the eighth time, it’s probably overkill. Same goes for Take My Breath Away and that little instrumental ditty (AKA, the Top Gun Anthem) that plays approximately 217 times.

When the action is not airborne, the film can feel a little ponderous no matter how many locker room confrontations and semi-nude two-on-two volleyball scenes we’re treated to. It’s not poorly paced, per se… it just has a little too much downtime for our liking.

While no content has been added to the film itself, the 30th Anniversary does come loaded with a large number of extras, including commentary by the late Tony Scott, who directed the film, as well as producer Jerry Bruckheimer. There’s also a “making of” featurette, a bunch of trailers/TV spots, music videos for the aforementioned songs and more. There’s nothing exceptional, but fans of the film should find at least some of it interesting.

There’s some good action in Top Gun, and even though not everything has aged all that well, there’s an undeniable element of fun that pulses through the film from start to finish. Although it’s aimed at the nostalgia crowd, you needn’t have grown up with it to enjoy it.

By HC Green
Tags: 30th Anniversary, Blu-ray reviews, Tom Cruise, Top Gun, Val Kilmer
This entry was posted on Sunday, May 8th, 2016 at 5:06 am and is filed under Herija Green, Movie Reviews. You can follow any responses to this entry through the RSS 2.0 feed. Both comments and pings are currently closed.