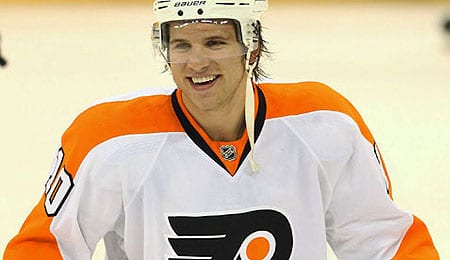 Brayden Schenn had plenty to smile about this season. (Flyers.nhl.com)

The 2015-16 NHL regular season is officially over, which means the end of the vast majority of Fantasy hockey formats. With that said, it’s time to take a look back on some of the best Wire Troll waiver recommendations of the season. (Cue the nostalgic music.)

Warning: This is unintentionally heavy on Presidents’ Trophy winners. Yes, Washington was just that good this season.

Brayden Schenn, Philadelphia Flyers (Final Ownership – ESPN: 100 per cent; CBS: 84 per cent): All it took was the Flyers shipping big brother Luke out of town for the younger Schenn to go on a long tear. In 80 games, the former LA draft pick piled up 26 goals, 59 points, a plus-3 rating, 33 penalty minutes, an outstanding 11 power play goals, 178 shots on goal, 187 hits and 30 blocks. If Philly is going to have a shot at toppling the league’s regular season champs, they’ll need Brayden at the top of his game and hope he continues to compete until the last second of play — literally (see video below).

Jeff Skinner, Carolina Hurricanes (Final Ownership – ESPN: 95.7 per cent; CBS: 72 per cent): The former Rookie of the Year managed to play in all 82 games this season, scoring 28 goals and 51 points, and adding a minus-2 rating, 38 penalty minutes, four power play goals, 258 shots on goal, 21 hits and 17 blocked shots. Eric Staal is gone, which means it’s time for Skinner to take over his role as the face of the franchise.

Radko Gudas, D, Philadelphia Flyers (Final Ownership – ESPN: 71.8 per cent; CBS: 27 per cent): In 76 games played, the former Bolt didn’t contribute much offensively – just five goals, 14 points and a minus-3 rating – but he made up for it in other key skater categories with 150 shots on goal, 116 penalty minutes, 304 hits and 157 blocked shots.

Michal Neuvirth, G, Philadelphia Flyers (Final Ownership – ESPN: 46.8 per cent; CBS: 41 per cent): A veteran of 200 career NHL games and four different franchises, the Czech has never posted a season quite so complete as this one. In 32 appearances while backing up Steve Mason, the up-to-this-point career No. 2 netminder managed to collect 18 wins, a 2.27 goals against average, a .924 save percentage and three shutouts. Had he continued his impressive performance over the course of twice as many appearances, he might have been in the discussion for the Vezina as the league’s best goaltender, but an injury in mid-March knocked him out down the stretch.

By Dakota Case
Tags: Brayden Schenn, NHL
This entry was posted on Thursday, April 21st, 2016 at 1:26 pm and is filed under Dakota Case, HOCKEY, The Wire Troll. You can follow any responses to this entry through the RSS 2.0 feed. Both comments and pings are currently closed.