Today we finally (and yes, somewhat tardily… damn you, real world!) wrap up our 2015 Awards ceremony with a look at the top pigskin performances from last year. 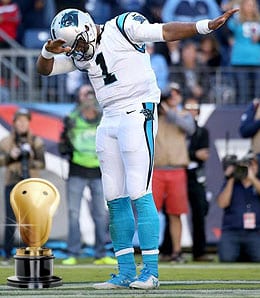 A little Dab will do you. (www.charlotteobserver.com)

After losing star WR Kelvin Benjamin before the start of the season, Carolina was written off by experts everywhere. Sports Illustrated projected the Panthers to finish the season in last place in the dreadful NFC South. Twenty weeks later and Carolina was the favourite in Super Bowl 50. The reason? Cam Newton. Being selected as the 11th QB off 2015 Fantasy draft boards had no effect on him. A WR corps consisting of free agent signing Ted Ginn Jr., rookie Devin Funchess, old man Jerricho Cotchery and unknown Corey Brown had no effect on Newton. Newton finished the season as the number one ranked Fantasy player, leading his team to a near perfect 15-1 regular season record.

He filled the stat sheets with 3,837 passing yards and 35 TDs, and added an additional 636 yards and 10 TDs on the ground. There were still skeptics of Newton heading into the playoffs as some experts had the nerve to float Carson Palmer’s name into MVP discussions. Well, after handling Seattle, and completely blowing the cleats off the Cardinals, there is no doubting now. Cue the Dab. — JB 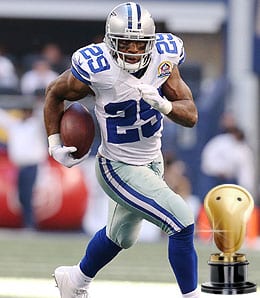 DeMarco Murray took the cake when it came to ineptitude. (Reddit.com)

Selecting a Fantasy dud for 2015 is akin to choosing who you’d like to sleep with at a Miss Universe contest — there’s a robust selection and you really can’t go wrong with any of them. So, let’s go about whittling it down a bit by dismissing those whose seasons were ruined by injury. Adieu Le’Veon Bell, Jamaal Charles, Marshawn Lynch, Dez Bryant and Andrew Luck. We hardly knew ye.

With all due disrespect to Peyton Manning’s dumpster fire of a season, he wasn’t a first-round pick, which removes him from the running in lieu of this triumvirate of suck: Eddie Lacy, C.J. Anderson and DeMarco Murray. 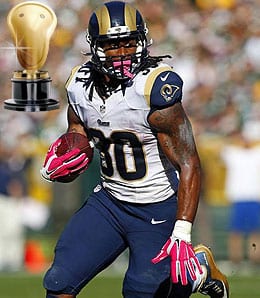 The Rams surprised many when they selected Todd Gurley with the 10th overall pick in the 2015 NFL Draft. But there is no surprise with this award selection. Starting in only 12 games because he was recovering from a knee injury suffered in college, the 2015 AP Rookie of the Year finished third in the league in rushing with an impressive 1,108 yards. Gurley’s 10 TDs on the ground were tied for fifth in the NFL. He finished the year as the fifth-ranked Fantasy RB, and 16th player overall.

Not too shabby for a guy that opposing defenses would obviously stack the box against because of the Rams’ complete lack of a passing game.

In too-early 2016 preseason Fantasy rankings, Gurley is projected as a top five player for the upcoming season, and potentially the first RB off the board. This is just further proof of what we already knew, that he was Fantasy football’s most productive and valuable rookie in 2015. — JB 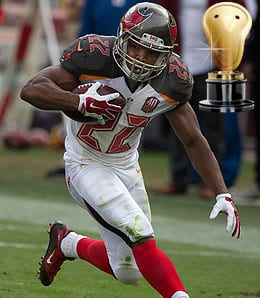 Doug Martin returned an immense profit for his Fantasy owners in 2015. (en.wikipedia.org)

To most Fantasy football owners, 2015 was the worst season for the running back position since the invention of digital sports. Thanks to piss-poor performances from top guys like Eddie Lacy, Jeremy Hill, C.J. Anderson, Carlos Hyde and DeMarco Murray, hope was all but lost in those who tote the rock. But then there was one, an emergence that would bring balance to the force. That man was the Muscle Hamster.

After a breakout rookie campaign in 2012, Doug Martin had two consecutive seasons with less than 200 rushing attempts and 500 yards, with a combined three total TDs. This led to a deflated ADP in 2015 Fantasy drafts, in which he lasted until the sixth round of standard leagues. What a profit Martin returned, as he finished the season second in the NFL in rushing yards with 1,402 while finding pay dirt six times.

Just to add a cherry on top, he totaled 271 yards through the air with an additional TD. Martin was extremely effective behind a shaky O-Line, ranking third among RB with 4.9 yards per attempt and seventh overall in all-purpose yards. After all was said and done, he finished the season ranked as the 11th best player in Fantasy leagues. The Dougernaut has returned. — JB

Pittsburgh Steelers wide receiver Antonio Brown is one of the most dangerous players in the NFL, but we never knew that beyond terrorizing opponents with his blazing speed and skill, he also posed a threat to goalposts. Well, in a December blowout over the Colts, he returned a punt 71 yards for a touchdown, leaping to straddle the goalpost upon scoring as if he had intentions of impregnating the innocent piece of equipment. For good measure, Brown grabbed the hair of the security guard who was leaning on the other side of the post. Yes, Brown’s antics resulted in a flag, as he was penalized for unsportsmanlike conduct (read: trying to make the goalpost his bitch). — RR

Antonio Brown can do it all.
This includes putting Pat McAfee on skates en route to a 71-yard punt return TD. https://t.co/mM49sFLARg

The Master of Disguise Award 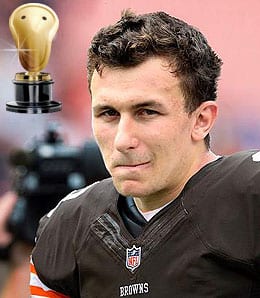 Cleveland Browns quarterback Johnny Manziel has certainly turned “can’t miss” into a misnomer since he entered the league, disappointing us with his ineptitude and off-the-field hijinks. He took those hijinks to a new level in late-December when he entered a famous Las Vegas nightclub — in disguise. Perhaps not wanting to add more fuel to the fire that is the Legend of the Screwup First Round Pick, Manziel was wearing a blonde wig, a fake mustache, glasses and a hoodie, while introducing himself as “Billy.” Man, this guy has had more embarrassing episodes than touchdown passes in his career. — RR

Waiting in the Weeds Award 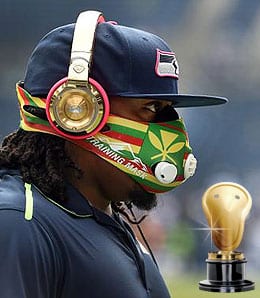 Marshawn Lynch is an inspiration to potheads everywhere. (Twitter.com)

Marshawn Lynch did it again last year, once again prompting Seattle area potheads to name a strain of marijuana after him. Given the huge success of the Beastmode strain that came out just in time for the 2014 Super Bowl, why not make an even better one with the Seahawks returning to the Super Bowl in 2015? Enter Beastmode 2.0, which has five per cent more THC than the original strain. Because nothing says football like Marshawn Lynch, a big fat doobie and a bag of Doritos. Game on! — RR

Now it’s your turn. Let us know in the comments below who you think deserved Fantasy football hardware in 2015?

By RotoRob
Tags: BASEBALL, FOOTBALL
This entry was posted on Wednesday, April 6th, 2016 at 2:06 pm and is filed under FOOTBALL, Herija Green, Jordan Branson, RotoRob, RotoRob Awards. You can follow any responses to this entry through the RSS 2.0 feed. Both comments and pings are currently closed.