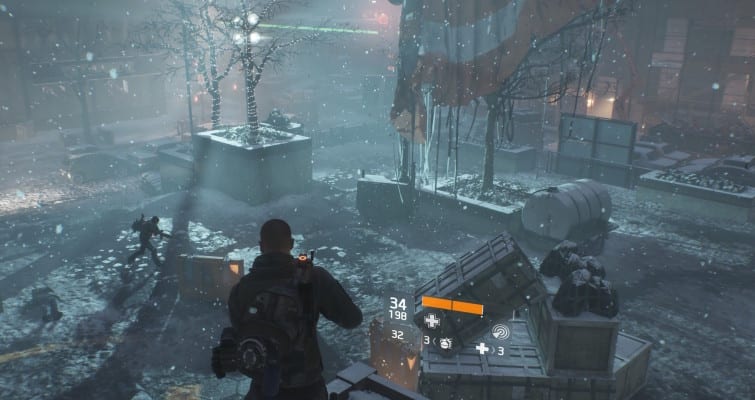 Try catching a snow flake on your tongue! Do not try with bullets!

The newest venture under the Tom Clancy banner takes us from the usual universe portrayed and places us in a very similar but ultimately different timeline. In Tom Clancy’s The Division, you act as an activated agent who must drop everything and make your way to Manhattan to establish order amongst the populace during an outbreak of a new strain of Smallpox. In this new shared-world shooter, your best friend can be a total stranger, but sometimes, also your worst nightmare.

Tight controls is always one of the highlights in Tom Clancy titles, and The Division is a perfect case of refined mechanics. Being a cover-based, third-person shooter, snapping and moving to cover couldn’t be any smoother than it is.

To snap to cover, you’ll press the “X” button. If you want to mantle over an obstacle, you can press or hold circle. Moving from a piece of cover to the next is easily handled by highlighting where you want to go and holding down “X,” which causes your Agent to break out into a Gears of War-style roadie run.

Aiming and shooting feel great but are just a tad sluggish for our tastes at default settings. Activating your special abilities is done by pressing either shoulder button. Pressing both activates your Signature Skill.

A selection wheel for various items and actions can be pulled up using the directional pad — holding right brings up consumables and holding left summons an emote wheel. It’s unfortunately quite easy to forget that consumables are even available in the heat of battle, leaving usages of Incendiary and Explosive bullets to “Oh, yeah!” moments.

The concrete and steel canyons of Manhattan have been meticulously recreated in The Division. Aside from a few streets being renamed, you’ll be touring a near exact replica of the Big Apple’s Midtown district. We’ve been to the city more than a few times and was able to navigate our friends around just from our memory!

Sometimes the detail in the torn avenues can be lost because of the weather conditions, which are some of the most visually impressive effects we’ve seen in a game. Snow will begin to fall lightly and realistically swell when floating under street lights. Multiple colours of steam and smoke flow from sewers and car fires, and the destructible environments add to each and every firefight.

Character animations are quite amazing as well, as each and every move provides a true sense of weight to equipment and clothing selections. Player and NPC models alike are filled with small details, such as squinted eyes when aiming through a scope and clothing being tugged at by the wind. Overall, the dead city of Manhattan feels grossly alive. It’s really impossible to describe the acute attention to detail featured throughout the game.

Unfortunately, the soundtrack is pretty forgettable. It’s not terrible; it’s just constantly taking a back seat to everything else, like the guns. For instance, each gun sounds punchy and vicious, and you can often tell what kind of setup an Agent is using blocks away just by hearing the echoes of their shots.

As an Agent of The Strategic Homeland Division (basically the government’s last resort to regain control), you’re whisked away to the East Coast, where a terrorist group has successfully stolen a sample of Smallpox and modified it. They then contaminated a huge sum of money, distributed it across the city and waited for Black Friday to happen.

There are also several collectibles in the forms of phone recordings, survival guides and Echo Locations. An Echo is a portrayal of past events that left residual traces, be it from surveillance or other reasons.

As you activate an Echo, the background takes a blue hue and orange people consisting of dots sprout up. You can then investigate key figures in the story while also learning about events leading up to your arrival. The whole system is well thought out, engaging and just plain cool.

Once you’ve finished the campaign and hit the (current) level cap of 30, Daily Challenges pop up on your map. These missions are generally more difficult versions of previous ones, but they provide superior credit and loot drop bonuses. And then there’s the Dark Zone, a walled-off portion of Manhattan that serves as a lawless area.

In it, enemies can reach level 32, with none under 30. Plus, they’re all “Elite” or “Named” enemies. As you kill them, you’ll increase your DZ level, which is separate from your capped level. This rank can go up to 99, but that will certainly take a while. Why? Well, in the Dark Zone, other players are also running around the districts with you. Cool, right?

This introduces the Rogue mechanic. At any time, a player can open fire upon another player in order to take a portion of his credits as well as his loot. See, in the Dark Zone, concentration of the virus is much higher, so you can’t immediately use the loot you find. Instead, you must make your way to an Extraction Point and pop a flare.

When this happens, it’s not unusual to see NPCs rush the extraction zone. Nor is it odd for players to congregate around the zone, aiming at other players in a paranoid Mexican standoff. If someone goes Rogue and doesn’t die immediately, a manhunt begins in which other players in the zone are notified that someone has gone Rogue.

Killing the Rogue awards some pretty decent XP but mostly sweet loot. On the flip side, scoring some kills as a Rogue and surviving the manhunt (countdown timer) is difficult but rewarding — and it’s quite the rush, too.

In the support mechanics department, we’ve got very basic crafting and skill unlock systems. The latter is done by upgrading parts of your base rather than just placing skill points into a slot every level-up.

Tom Clancy’s The Division certainly has its issues, but developer Massive has been doing a great job listening to players and maintaining the game. While the launch was pretty rough, all should be forgiven because The Division offers a multiplayer experience like no other and definitely stands as one of the year’s best titles.

By Jeff Cater
Tags: Tom Clancy, Tom Clancy's The Division, Ubisoft, Video Game Review
This entry was posted on Tuesday, March 22nd, 2016 at 6:50 pm and is filed under Jeff Cater, Video Game Reviews. You can follow any responses to this entry through the RSS 2.0 feed. Both comments and pings are currently closed.