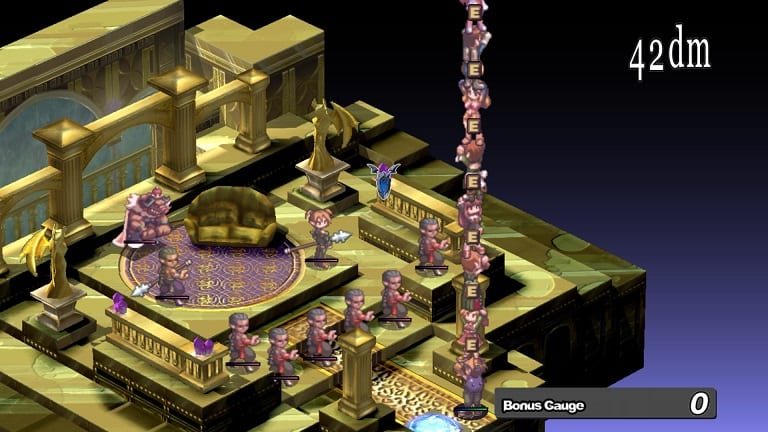 Extreme cheerleading is big in Hell.

Disgaea is a strategy RPG series that has largely been associated with the PlayStation brand. However, with the release of Disgaea PC on Steam, NIS America has attempted to court the PC gaming crowd, who are no strangers to strategy games. Does it hold up, or was porting the first game on a series on its fifth entry a mistake?

Disgaea PC controls like many other Japanese SRPGs pioneered by the likes of Final Fantasy Tactics and, well, the original Disgaea release. The controls are relatively basic, simply picking your character, telling them where to move and selecting an action from a menu.

It is a little dated in that this is an adaptation of a PS2 game that didn’t get designed with analog controllers or a mouse in mind, so using d-pad for navigation is generally preferred. Battles could have used a zoom out function as well, as dragging the camera around to view the entire battlefield can become a bit of a chore.

While this port does have some shiny new bells and whistles, the game’s PS2 roots are always clear. There’s a character filter option that’s on by default that mostly just blurs them, and the original, more pixelated style works better.

Two areas that do have a direct improvement: a more modern UI, and map designs that are slightly tweaked. Thankfully for purists, the game allows you to mix and match the variety of changes at your whim. Still, even after finding your sweet spot, the game remains visually dated.

Audio ultimately holds up fairly well, mainly because the score is generally great. Voice acting is on the hammy side but fits the rather ridiculous world of the game well. Sound effects ranging from battle grunts to the clashing of swords are satisfying. It is the probably the area in which the game has held up the best.

The King of Hell has died, and players assume the role of his son, Prince Laharl, as he looks to assume his father’s throne. There’s a small hitch in that plan, however, as Laharl has been sleeping for a few years and dozens of other powerful demons have emerged to vie for the throne and care nothing about his claim to it.

This unique setup is where a lot of the game’s charm comes from. You get to be a generally evil character, and the comical take on Hell is a lot of fun. There’s not much actual interesting story, but it does remain amusing — for example, when you meet your first real boss and Laharl renames them Mid-Boss, even the UI changes his name to it.

Battles take place on relatively small areas in which you’ll drag out your relatively small crew of allies. The basics of combat are similar to many other SRPGs, but there’s some fun tweaks as well. You can surround enemies and set up a combo, or you can pick up pretty much anything or anyone and throw them, allowing for amusing tactical possibilities. Is there an annoying ranged enemy picking you off? Scoop up a teammate and throw them at him to get the extra movement needed to close in.

There’s not much exploration in the game, which opts for a hub area and simply selecting missions to launch. The hub contains most of what you need from item and weapon shops to a council of demons you can lobby to change the rules of the game. The game shines when it is delving into oddities like the council, though the way everything works can be overwhelming and tough to grasp.

Those looking to grind will find the Item World the product of their dreams. Nearly all items can be delved into for additional randomized battles, and getting far enough into the world will earn bonuses for the item when equipped. This actually might be a bit of a grinder’s nightmare, too, as it can be very easy to get distracted by the dozens of optional things to do rather than progressing the story.

A decade-plus after its initial release, Disgaea PC is a bit rough around the edges. While it is still a good game and a bit of a classic, it does feel a bit odd it was chosen to debut on PC when Disgaea 5 and its wealth of improvements would’ve made a better introduction.

By Brian Gunn
Tags: Disgaea PC, Playstation, Strategy RPG, Video Game Review
This entry was posted on Friday, March 25th, 2016 at 2:44 am and is filed under Brian Gunn, Video Game Reviews. You can follow any responses to this entry through the RSS 2.0 feed. Both comments and pings are currently closed.