Blu-ray Review: In the Heart of the Sea 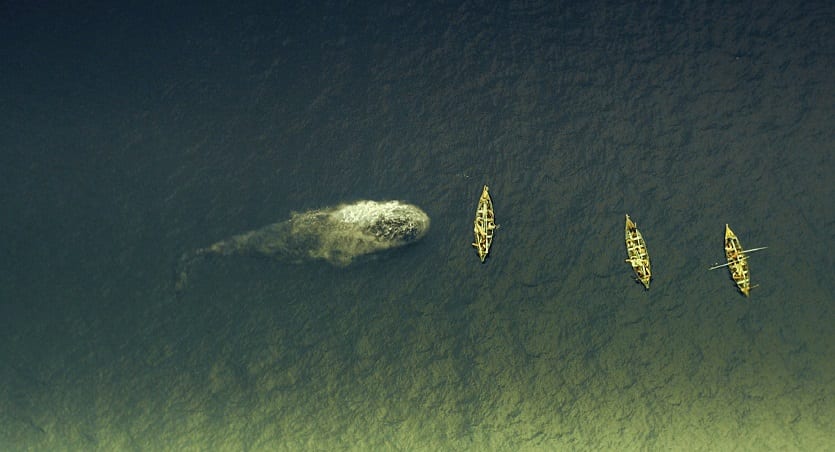 When last we saw Chris Hemsworth partnering with director Ron Howard it was 2013’s surprisingly interesting Formula One drama, Rush. This time the two of them are teaming up for In the Heart of the Sea, which endeavours to tell the true story of the Essex, an 1800s whaling vessel that sank after being rammed by a whale. Its saga at least partially inspired the book Moby-Dick by Herman Melville, which also functions as a central part of the film.

Things begin with Melville (Ben Whishaw, who played Q in the recent 007 films) arriving to interview the last surviving member of the Essex, Tom Nickerson (Brendan Gleeson, who played “Mad Eye” Moody in the Harry Potter movies), who was a cabin boy on the infamous voyage. The incident was written up as an accident, but Melville believes there’s more to the story, and he sets about extracting the details from a reluctant Nickerson.

Outside of a few scenes, everything else takes place in the past as Captain George Pollard (Benjamin Walker, who was in Abraham Lincoln: Vampire Hunter) and first-mate Owen Chase (Hemsworth) lead the crew of the Essex out to amass barrels of whale oil. The two clash almost immediately with the experienced Chase envied by the inexperienced Pollard, whose command is based on his family’s reputation.

Their adversarial relationship makes things difficult, but the lack of whale sightings poses the real problem as the Essex makes its way further and further from its harbour of Nantucket. As fortune would have it, the crew runs into a Spanish captain while ashore for supplies, and he tells of an area teeming with whales some 2,000 miles west. The captain also tells of a white whale that destroyed his ship and killed some of his crew.

Skeptical and desperate to collect enough oil to sail home, Pollard and Chase agree they should head out in search of these “Offshore Grounds.” Of course, when they find them, they end up with more than they ever bargained for.

There’s a very strong cast in place here, starting at the top with Hemsworth, who continues to impress in roles that aren’t Thor, and continuing on down the line. Walker and Hemsworth strike a good balance in which, although there’s dislike, there’s also professionalism and shared goals. Tom Holland, who will be taking over the role of Spider-Man in the current Marvel universe, does well in his role as the young version of Nickerson.

Visually, the film has moments that are really impressive. While a few of the scenes — the dolphins alongside the whaling boats, Nantucket in the distance of Chase’s home — fall randomly flat with their CGI, the work done on the white whale is first rate. Seeing it dive beneath the boat and turn it into kindling looks excellent, as do its other appearances. The sense of scale between all the whales and the boats really drives home how dangerous this profession was.

Arguably the biggest problem with In the Heart of the Sea is the difference between what you’re probably expecting to see — a titanic clash between a massive sea creature and an overmatched but game whaling vessel — and what actually unfolds.

We mean, when you’re talking about the story that inspired the story of Moby-Dick there are expectations of man versus nature, and instead it’s an asterisk. There’s easily more time devoted to Melville and Nickerson speaking in the “current day” than the whale attack.

Not only is the confrontation brief, but the most exciting part of the film happens roughly halfway in, and that’s followed by what feels like hours of sailors desperately fighting for survival. It’s relentlessly grim and, what’s worse, pretty boring to watch.

That’s a tough thing to overcome, and it undermines the interesting locations/set pieces and the actors’ best efforts.

To its credit, In the Heart of the Sea has a wealth of extra content. That includes over 40 minutes of added or extended scenes. A few are unfinished, meaning you’ll see blue screens or placeholder CGI, and others have had their content rolled into other segments. Still, they’re worth a watch. There’s also some interesting pieces about the challenges of working in the water, but Howard’s “Captain’s Log” seems like a lengthy plea to follow his Twitter feed.

There were a lot of elements in place for an interesting and exciting film, but In the Heart of the Sea glosses over the most interesting parts and ends up a bit lacking in the all-important entertainment department. While it’s not bad, it’s just kind of dull.

By HC Green
Tags: Blu-ray reviews, Chris Hemsworth, In the Heart of the Sea, Ron Howard
This entry was posted on Monday, March 7th, 2016 at 12:50 am and is filed under Herija Green, Movie Reviews. You can follow any responses to this entry through the RSS 2.0 feed. Both comments and pings are currently closed.