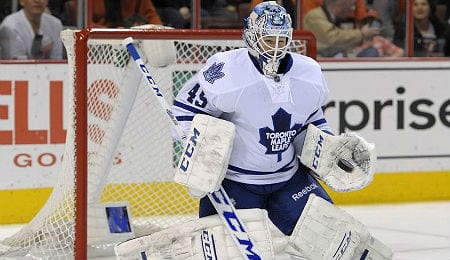 Jonathan Bernier has had a tough season, but is coming on now. (Eric Hartline-USA Today Sports)

Welcome back to another week of Fantasy hockey waiver wire recommendations. NHL Editor Dakota Case is out of action this week, so you’ll have to rely on your trusty editor for today’s column.

This week, Detroit’s Dylan Larkin wowed the hockey world with his blazing speed; Gary Bettman will remain commissioner of the league until at least 2022 — much to the dismay of the universe; and the John Scott All-Star fiasco just keeps getting more embarrassing for all involved.

Without further ado, let’s get to this week’s recommendations…

Jonathan Bernier, G, Toronto Maple Leafs (ESPN: 13.1 per cent; CBS: 31 per cent): Last month, Bernier got a chance to revitalize his Leafs career thanks to a wave of injuries and he’s done well — generally. Take away that seven-goal blitzing and he’s only surrendered more than two goals once and more than one twice over the last five games. Yes, the Leafs are in free fall, so don’t expect many wins, but Bernier has managed to keep his team in the game more often than not in recent weeks thanks to a whopping .935 save percentage over the last five. You’ve got to figure either James Reimer or Bernier will be dealt at the deadline, and however that plays out, it could be a boon to Bernier’s Fantasy value. Just keep Bernier away from Steven Stamkos (see video below).

Mattias Ekholm, D, Nashville Predators (ESPN: 33.7 per cent; CBS: 50 per cent): Ekholm is currently flying off the wire on the strength of a career-high five-game point streak (1-5-6). His PT has been on the rise, and the Preds’ 2009 fourth rounder is taking his production along for the ride. Ekholm broke through last season, but he’s taken his game to a whole new level in the first half of 2015-16, having already set new career highs in assists and points. And given that he’s seeing time on the second power play unit, you can expect those numbers to continue in the second half.

Andre Burakovsky, LW, Washington Capitals (ESPN: 1.7 per cent; CBS: 25 per cent): We liked Burakovsky enough to slot him 246th in our Dynasty League Rankings a year and a half ago, but now he’s turning that potential into production as evidenced by three goals and four assists over the last five games (with all three goals coming in the last two). With nine points in the last six, he’s clearly shaken off what had been a bit of a sophomore slump. Burakovsky has gone +5 in the last five games, and after a solid rookie effort last season, looks like he’s poised to take his game up a notch in the second half.

Joonas Korpisalo, G, Columbus Blue Jackets (ESPN: 17.1 per cent; CBS: 11 per cent): This rookie has thrust himself into the Fantasy consciousness by taking advantage of injuries and running with the Blue Jacket goalie gig. The Finnish youngster is on a major roll, with six straight games in which he’s given up two goals or less. Korpisalo has now won five games, trimmed his GAA and managed to raise his save percentage to a more respectable .915. Sergei Bobrovsky (groin) remains out indefinitely, but note that regular backup Curtis McElhinney (ankle) is getting close to coming back, so Korpisalo’s run may be short-lived.

Carter Hutton, G, Nashville Predators (ESPN: 2.1 per cent: CBS: 7 per cent): Need a backup goalie? How about former Blackhawk Hutton? He’s looked very sharp recently, stopping 55 of 56 shots over his last two outings. No, Hutton doesn’t get much action behind Pekke Rinne, but he’s already won five games this season and has really improved both his GAA and save percentage. Nashville’s goaltending finally seems to be coming around of late, and Hutton has been a big part of that. At the very least, he’s a fine DFS play on nights when you know he’ll be manning the crease.

Cam Atkinson, RW, Columbus Blue Jackets (ESPN: 49.2 per cent; CBS: 47 per cent): In late-March, Atkinson highlighted our Wire Troll column, but he faded down the stretch after a huge month. He’s played well this season, but has really picked up the pace with six goals and nine points in 12 games this month, including 4-1-5 over the final two games before the break — both against the Habs. Atkinson has developed into one of the faces of the Blue Jackets, and he’s heading for a career season in his fifth campaign with the club.

By RotoRob
Tags: Jonathan Bernier, Toronto Maple Leafs
This entry was posted on Sunday, January 31st, 2016 at 9:58 pm and is filed under HOCKEY, RotoRob, The Wire Troll. You can follow any responses to this entry through the RSS 2.0 feed. Both comments and pings are currently closed.