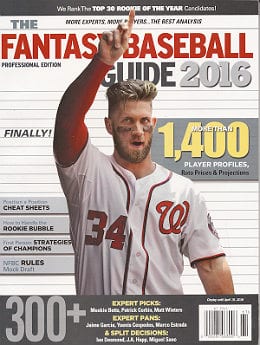 Everyone’s favourite Fantasy guide is back!

Given the recent weather, you can be excused for not actually realizing that it is now January, which means it’s time for the annual rite that is the Fantasy Baseball Guide. The 2016 edition is now out, and we’re here to give you the inside information about what you can expect. And hell, we’ll even throw in a sweet offer for our readers because we are just all about spreading the STD-free love.

RotoRob has now been a proud contributor to RotoMan’s fantastic Fantasy baseball research publication for a dozen years! Every fall, we break out our long pants, start eating more hearty meals and completely engross ourselves in writing profiles for the Fantasy Baseball Guide, this time churning out over 400 of them! For us, this is “the most wonderful time of the year.”

So ya… about that promo: same dealio as last year, my peeps. RotoRob readers can save $1 when they order the online version (US$7.99; you need a web connection to view it, but it auto formats to any device or screen) or PDF version (US$9.95, this is a download that can be read on your device, best viewed on a desktop, laptop or tablet) of the magazine.

Go here, plug in the following promo code at checkout: RotoRob and… Boom! You just got the best publication the industry has to offer and you saved yourself 100 cents. You’re welcome.

As per usual, this ideal guide featured plenty of Team RotoRob-related involvement. Besides myself, current and former RotoRob writers whose work can be found in the 2016 Fantasy Baseball Guide include: Buck Davidson, Tim McLeod and Herija Green.

The key changes for 2016 revolve around rookies. We’ve made some changes in this section that result in a better focus on our top rookie rankings, but also mean you’ll find better profiles in the actual guide section.

For 2016, the goal was to get a more useful group of players into the Guide, so we had a lot more discussions and tended to be much more ruthless when it came to cutting those marginal players that never tend to actually provide any Fantasy value.

However, because our profiles were more in-depth and we had more picks and pans than ever before, the profile section is actually four pages longer this year!

The experts consensus pick for the 2016 Rookie of the Year? Oh, a certain middle infielder for the Dodgers, followed by a superb outfield prospect in Minnesota.

The publication started showing up in stores around January 7, or if you want to procure it online, once again, order here and remember to use the RotoRob promo code for a deal!

By RotoRob
Tags: 2016 Fantasy Baseball Guide, Buck Davidson, Fantasy Baseball Guide, Herija Green, Los Angeles Dodgers, Minnesota Twins, NFBC, RotoMan, Tim McLeod
This entry was posted on Wednesday, January 13th, 2016 at 9:53 pm and is filed under BASEBALL, Magazine promo, RotoRob. You can follow any responses to this entry through the RSS 2.0 feed. Both comments and pings are currently closed.