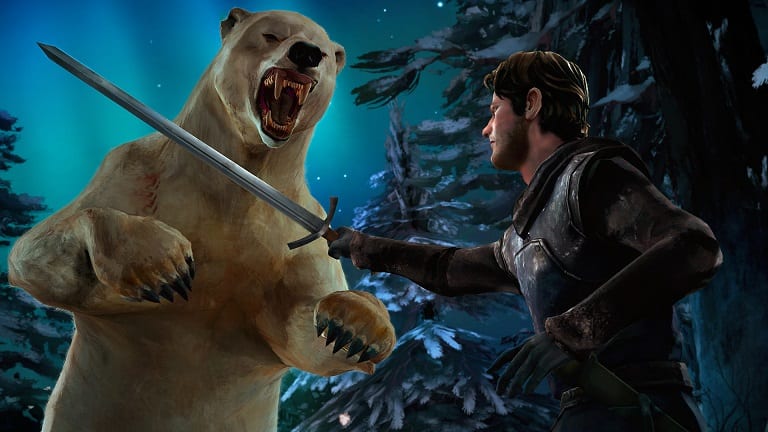 Wait a minute, is that “Bear”ic Dondarrion!?

It’s a disappointing decision… not so much that everything wasn’t resolved but rather that basically nothing was. The game begins in King’s Landing, where Mira’s dangerous game starts unraveling and leaves her in a precarious position. As has become the norm with this season, you’re given a pair of unappealing options, but regardless of your choice her fate is left uncertain.

Moving north of the wall, Gared Tuttle has finally found the North Grove where he learns the secret Lord Forrester was keeping. There are some worthwhile action sequences up there, but much like the stuff involving Arya Stark on the show it feels so disconnected from the rest of the plot. Once again we’re left to make a “fork in the road” decision, but as with Mira, whatever we decide has no immediate impact on anything.

That leaves Ironrath and the impending battle between House Forrester and House Whitehill. The entire season has been building toward this confrontation, so naturally we’re going to be given our chance at revenge after being emasculated and bullied throughout the first five episodes. Right? RIGHT!?!?

Unfortunately, this is where TellTale’s vision fails to match George R.R. Martin’s or HBO’s. Both the show and the book balance out the misery, at least to a degree. The Red Wedding was awful, but The Purple Wedding felt like a just reprisal. Ned lost his head, Jamie lost his hand. Tywin Lannister manipulated and masterminded terrible events, and then he was killed by his own son. Maybe it didn’t strike a true balance, but you need moments when the good guys triumph.

It didn’t need to be a sweeping victory, but for it to be scripted as abject failure — no matter which choices you’ve made along the way — is a serious misstep. It’s just another embarrassment for House Forrester heaped atop the dozens of ones we’ve already been forced to suffer. There needed to be a payoff for enduring it all, and there isn’t.

Also, despite our disclaimer, it feels like we should at least touch on a couple of significant graphical issues we encountered. The first occurred during Mira’s talk with Margaery Tyrell when a piece of the credits — the list of executive producers — remained burned into the screen for the entirety of the scene.

Later on, during a fight one of the main characters had his head pushed toward a fire. What emerged was so startling we thought we’d missed a prompt and he’d suffered a partially melted face. From then until that section concluded it looked like they were wearing a crown of burnt toast. A quick trip to YouTube confirmed it was a graphical glitch. Ultimately these are harmless, but they’re pretty distracting and a continued issue with TellTale’s offerings.

Of all the properties TellTale has adapted during its rise, none excited more than this, and while it did a nice job aping many aspects of Game of Thrones the despair card was ultimately overplayed. We’re sure by the time the second season rolls around we’ll drum up some fresh interest, but The Ice Dragon was a very disappointing finish to something that started with so much promise.