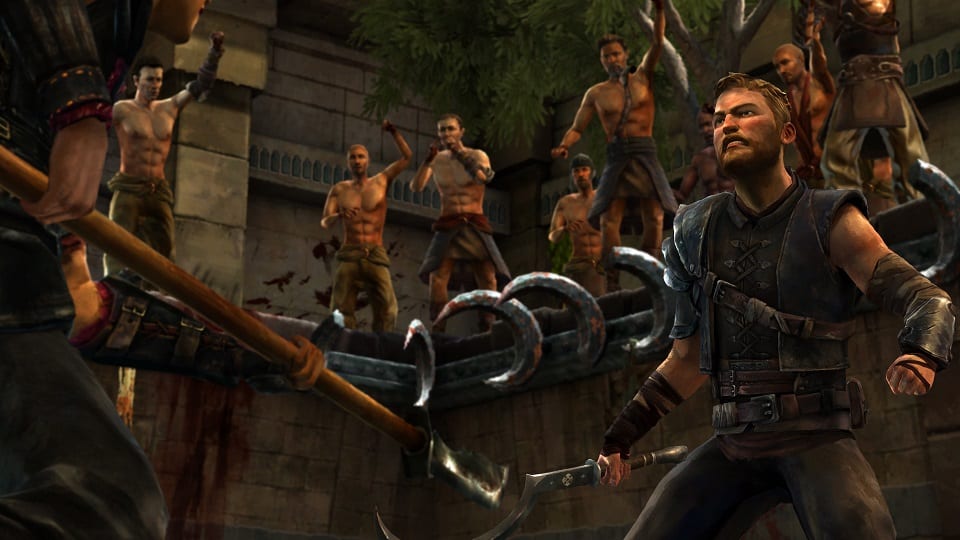 If you’re a fan of HBO’s Game of Thrones series you know to expect the unexpected when the second-to-last episode of a season comes out — in fact, Episode 9 has featured many of the most jaw-dropping moments (The Red Wedding, Blackwater, etc.) in a series that’s known for them. Now it’s time to see if TellTale’s penultimate installment, A Nest of Vipers, can live up to that legacy.

Unfortunately, of the four stories being told, two go virtually nowhere. That isn’t the kind of the pacing we should be seeing with just one episode remaining. We’ll start with Gerard Tuttle, who’s now north of the wall searching for the North Grove. Or so we thought. Instead, all Gerard does is argue with his companions over whether or not they’ll assist him in his search. All that exposition is rendered meaningless by the conclusion of his section, though, as an encounter leaves the company no choice but to make for the Grove.

Meanwhile, Mira is left to spin her wheels — while she didn’t play a huge role in Episode 4, at least what she did felt significant. Here you’re treated to a couple of interesting interactions with Cersei and Tyrion Lannister, the former wanting you to extract information from the latter leading up to the trial, but it feels like a sideways move at best as it relates to House Forrester’s predicament.

We knew Ramsey Snow’s arrival at Ironrath to close out Sons of Winter was bad news for Rodrik, and that holds true as his actions drive a wedge into your tenuous alliance with House Glenmore. It’s here the limitations of having a character so central to the TV show are on full display. You’re given the option to threaten or even stab Ramsey during his brief appearance, but you know with absolute certainty that nothing will come of it, so it robs the moment of drama.

One important element to come out of Ramsey’s visit is that House Bolton will no longer interfere in the feud between the Forresters and Whitehills. There’s no real explanation behind it, but it frees up the game’s final act to play out without the question of why the house backed by the current Warden of the North isn’t getting any support.

A Nest of Vipers also clears up one piece of Forrester business, revealing the identity of the traitor — a plotline that has definitely been on the back burner — in the kind of “right place, right time” fashion that Game of Thrones almost always avoids. His reasons for betraying your family vary based on your major decisions, but they’re not very compelling and didn’t make us hesitate for even a moment when deciding what kind of justice to meter out.

Asher has the most interesting arc, though that endorsement comes with a caveat. Once again the Daenerys Targaryen seen in TellTale’s interpretation of Westeros doesn’t gel with the one that appears in books and on the show. That Daenerys executes her own supporters to uphold her word as law. This one backs out of an agreed upon deal, substituting money for the promised sell swords. Granted, it sets up a major section of the episode, but it’s out of line with the character.

With the Second Sons remaining in Meereen, Asher and Beskha must now descend into the fighting pits to recruit a force to accompany them across the Narrow Sea. The dialogue and interaction aren’t great here, but Asher gets to look like a bad ass and participate in one of the better one-on-one fights TellTale has ever created.

Despite some problems, A Nest of Vipers does manage to end on a high note by creating an emotional sequence that represents your most difficult decision since the story began, and it sets the stage for a vengeance-filled finale. It’s just unfortunate they left so much work to do, which makes us a bit worried they’ll end cramming too much into Episode 6.

TellTale cranked things up with the excellent Sons of Winter, but it failed to build on that momentum with the relatively lackluster A Nest of Vipers. It leaves a lot to be accomplished and wrapped up in The Ice Dragon. Let’s hope TellTale is equal to the task.