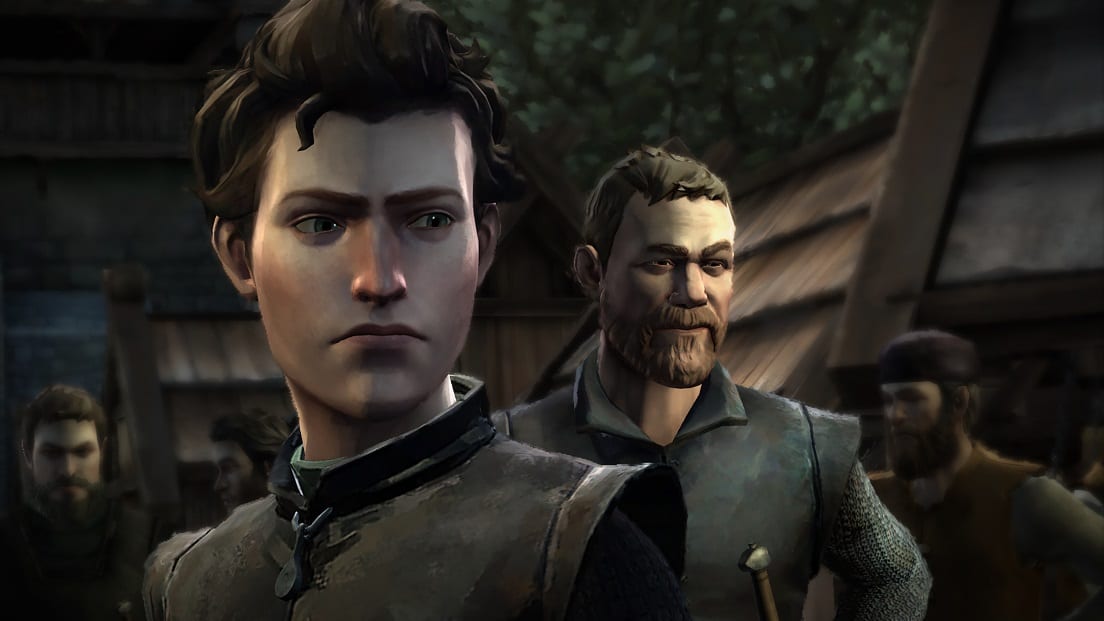 While TellTale’s other new series, Tales from the Borderlands, seemed like an unusual crossover, its collaboration with HBO’s ultra popular Game of Thrones felt like a natural fit. It’s a series known for its three-dimensional characters, uncompromising violence and throwing no shortage of jaw-dropping moments at its audience. And, as Walking Dead has shown, that’s right up TellTale’s alley.

Action is handled in traditional TellTale fashion with on-screen prompts — such as directional swipes or button presses — that you must match in time or be faced with failing encounters. Iron from Ice has some early action, and the game holds up well over some extended combat. Moving and interacting with the environment are easy, and the interaction menu matches the controller layout.

There’s something of an unusual visual style at work in Game of Thrones with many scenes taking on a very thick, pastel-based look. It seems more obvious in scenes in which you control the character and/or have multiple characters on screen at once. An odd fuzziness shows up in backgrounds as well, giving those objects a surrealistic appearance.

Character models are nicely done, particularly the excellent recreations of the HBO cast with several of them appearing throughout the episode. This should be a big deal to fans of the show, as seeing the likes of Tyrion Lannister and Ramsey Snow (that bastard!) as we know them helps ground this new storyline in the series’ lore and gives it credibility. There are a few moments when approaching windows that the game feels like the budget (or time) ran out, as instead of seeing our characters’ view we’re treated to a shot of them looking out and saying what they see.

In addition to using their likenesses, Iron from Ice also features vocal performances by Peter Dinklage, Lena Headey and others. The game’s original characters have lesser known talent behind them, but it’s their natural domain and, as such, they generally outshine their TV counterparts. It’s a strong showing all the way around, including savvy use of the show’s opening title sequence and theme music.

Anyone afraid that TellTale’s Game of Thrones would feel too far removed from the events of the show should have those fears dashed in the opening moments as House Forrester, the focal house of this side story, drinks wine just outside the Twins on the eve of Robb Stark’s march on Casterly Rock. Yes, the game opens at the infamous Red Wedding, and, as loyal banner men of House Stark, House Forrester loses plenty on that fateful night.

Told from multiple perspectives within (and around) House Forester, Iron from Ice primarily deals with the aftermath of the Red Wedding. In this episode you’re introduced to Gerard Tuttle, a Forrester squire that manages to survive the Frey betrayal, Mira Forrester, handmaiden to Margaery Tyrell, and Ethan Forrester, the new Lord of Ironrath.

It’s interesting to watch TellTale intertwine the stories, providing insight into how one’s actions affect the others. Not all of the elements are great — a showdown between Ethan and the Lord of a rival House felt unfocused and meandering, and the thought that the Lannisters would take the time to summon a handmaiden from a lesser House to question her loyalties seems dubious — but the episode does a nice job of building a foundation for the rest of the series.

Planting the seeds for future episodes does mean Iron from Ice can bog down from time to time, and most of the actual action is concentrated during one portion of it. There’s lots of dialogue and plenty of lore to wade through, though the clear upside is that the game is endearing you to House Forrester and making you care about them as a group rather than just a means to interact with the Westeros you’ve been watching on Sunday nights for the past few years.

Easily the strongest element at work here is the amount and gravity of your decisions. It takes literally minutes before you’re presented with your first major choice, and the game just keeps throwing them at you hot and heavy for the entire two-hour ride. In past TellTale games we’ve generally felt fairly certain about how we wanted to proceed, but there’s just so much more involved here, both in the number of decisions and their significance, that when the credits rolled we instantly wanted to go back and try an alternate approach in numerous sections.

Conversely, the weak point is a general lack of personality from two of the three protagonists with Mira and Gerard coming off a bit wooden. So, while they still manage to help create sympathy for House Forrester’s plight, both could use a little more of an edge.

Iron from Ice is an encouraging start to TellTale’s take on Game of Thrones, employing familiar locations and characters to help build up the back story of House Forrester. It also lets us know in no uncertain terms that the series will gleefully adhere to the show/book’s unpredictability and willingness to kill off anyone at any time, which opens up a ton of possibilities going forward.

By HC Green
Tags: Telltale Games
This entry was posted on Tuesday, December 2nd, 2014 at 12:44 am and is filed under Herija Green, Video Game Reviews. You can follow any responses to this entry through the RSS 2.0 feed. Both comments and pings are currently closed.