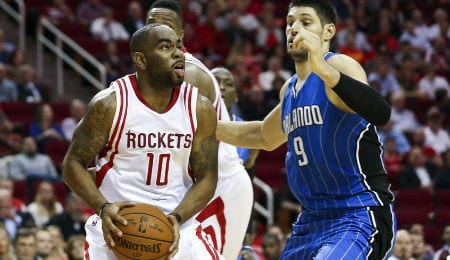 Welcome back to another week of Fantasy basketball waiver wire recommendations. This week, Derrick Rose finally reminded us how good he is with a clutch performance on Thursday; the Grizzlies and Clippers are engaged in a social media war (what do you think the chances are that Monday’s game pitting these two teams is sure to garner plenty of interest at bookmaking sites like 10Bet?); and Miami’s Gerald Green is reportedly okay after being hospitalized for some reason.

Marcus Thornton, SG, Houston Rockets (ESPN: 23.1 per cent; CBS: 18 per cent): Heading into last season, we slotted Thornton among the top 40 in our Shooting Guard rankings, but he didn’t come close to living up to our expectations. His rebounding and steals fell off the table in Boston, so he was dealt to Phoenix, where he was buried on the bench and dealt with a toe woe. Signed by the Rockets this summer, Thornton has been an early season surprise as he’s getting plenty of burn — and touches. He’s supplying nice scoring, great three-point numbers (how about four on Friday?) and even decent rebounding. As long as Thornton is starting, he needs to be owned. Let’s not forget how he burst onto the scene as a rookie with the Hornets back in the day (see video below).

Nik Stauskas, SG, Philadelphia 76ers (ESPN: 16.8 per cent; CBS: 44 per cent): We really thought Stauskas would be an impact rookie last season, but he simply didn’t can enough buckets to be worth a look. Now with Philly, he’s writing a different tale as a sophomore, and is really taking advantage of the injury to Robert Covington. Stauskas’ PT keeps rising, and he’s put up four straight games (the last three of which he started) of double-digit scoring with at least two treys as he really takes advantage of the open space created by opponents double teaming Jahlil Okafor.

Doug McDermott, SF, Chicago Bulls (ESPN: 7.6 per cent; CBS: 17 per cent): Last season, we slotted McDermott 35th in our Small Forward rankings, but he did not deliver. Knee surgery delayed the start of his rookie season and he barely got off the bench in the second half, so his touches were very limited. This season, McDermott may see time at both the three and four and he earned his first career start on Thursday. We’re starting to see his offensive skills, with back-to-back double digit scoring games earlier this week (including a five-trey show on Tuesday) and he’s being rewarded with more PT (26.5 MPG over the last two). The fact that Bulls won the game that McBuckets started bodes well for more. Grab him now.

Justise Winslow, SF, Miami Heat (ESPN: 23 per cent; CBS: 40 per cent): As we discussed in our Summer League report, Winslow has a chance to be one of the steals of the draft. He’s a winner, having played for the national champion Blue Devils, so he’s likely unfazed by the pressure of being an NBA rookie. Winslow is wasting no time in opening people’s eyes, and on Friday he flirted with a double-double (including scoring a team-leading seven points in the final quarter of a three-point game) despite foul trouble. His PT is already on rise (33.5 MPG over the last two) and he even showed an outside touch, draining a pair of three-pointers on Sunday. This a youngster you want on your team given his massive upside and Miami’s aging roster (which will need plenty of rest down the stretch).

John Henson, C/PF, Milwaukee Bucks (ESPN: 8.3 per cent; CBS: 35 per cent): We thought enough of Henson last season to slot him 30th in our Power Forward rankings, and while he wasn’t able to build on his breakout 2013-14 campaign, he wasn’t far off from our rankings. He hurt his Achilles in the season opener and had missed four straight games before returning Friday, scoring a team-high 22 points (nailing 8-of-12 from the field) with five boards and three blocks to lead the Bucks to victory at Madison Square Garden. Milwaukee tends to play smaller lineups, but Henson will factor in big time when the team needs more size. Expect his minutes to rise next week.

Clint Capela, C, Houston Rockets (ESPN: 6 per cent; CBS: 16 per cent): When Capela was drafted last year, we expected Houston to give him plenty of time to develop, but the second-year big man is on a meteoric rise now, culminating with Friday’s double-double, four-block showing — especially impressive considering the foul trouble he was in. This Swiss youngster has been starting periodically as the Rockets are giving Dwight Howard plenty of rest early on. Capela is a great dynasty option, but for now, he’s best employed as a DFS option when you know that Superman is sitting.

By RotoRob
Tags: Derrick Rose, fantasy basketball, Houston Rockets, John Henson, Marcus Thornton, Memphis Grizzlies
This entry was posted on Saturday, November 7th, 2015 at 5:18 pm and is filed under BASKETBALL, RotoRob, The Wire Troll. You can follow any responses to this entry through the RSS 2.0 feed. Both comments and pings are currently closed.