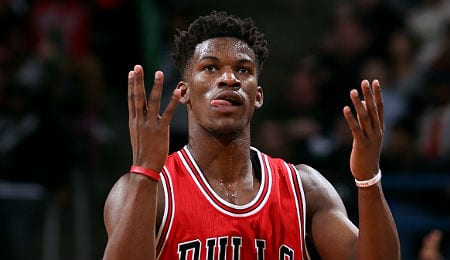 How will Jimmy Butler fare with a healthy Derrick Rose in the Bulls backcourt? (nba.com)

According to the most recent odds at Sports.Betway.com, the Bulls (1.53) are favoured to exact a bit of revenge over the Cleveland (2.55) in this contest.

Let’s see how these teams match up in what could easily be a preview of this season’s Eastern Conference Final.

As mentioned, the Cavs wound up going to the Finals last year, but dropped the final three in losing in six games to the Warriors. As always, LeBron James will dictate the fortunes of this club, but there’s talk he may not see as much PT as usual — especially early on given the back woe that’s plagued him this preseason. He will suit up Tuesday, however.

LBJ is 30 now, so no longer a kid, and after seeing a career low 36.1 MPG last season, that figure may dip even lower this season. He remains one of the top Fantasy studs around, and the fact that he hoisted up more shots last season was great to see. Expect more of the same early on with PG Kyrie Irving (knee) sidelined. After all, we all know what Irving is capable of when healthy — even in the virtual world (see video below).

Meanwhile, Chicago’s stud PG is also dealing with injuries, as Derrick Rose — shockingly — can’t stay healthy. He’s expected to play Tuesday, but the fact that he says he’s still experiencing blurred vision in the wake of an orbital bone fracture is sobering.

Rose stayed somewhat healthier last season, playing in his most games (51) since 2010-11, and while he was more effective, his PT has been declining for several seasons. Chicago is a very different team when he’s in the lineup, and you can’t help but wonder how D-Rose’s presence will affect the continued development of star-in-the-making SG Jimmy Butler.

Cleveland was decimated by injuries in the playoffs and probably felt snakebitten as a result — especially after blowing its 2-1 lead in the Finals. You have to know that will be a motivating force all season for this team. The fact that somehow it feels like King James’ legacy won’t fully be complete under he brings a title to Cleveland only fuels that dynamic further.

Interestingly, the Bulls also blew a 2-1 lead in their conference semi-final, dropping the final three to bow out to Cleveland just as it appeared Chicago was ready to slay the beast.

The Cavs proved in that series that they didn’t necessarily live and die based on the performances of James and Irving. James only shot 39.9 per cent in the Chicago series, while Irving was also not at his best before getting hurt in the deciding game.

Other issues facing Cleveland early on this season will be how quickly Kevin Love returns to full effectiveness after his shoulder was hurt in the postseason. Centre Timofey Mozgov (knee) may also be somewhat limited early on as he underwent surgery in the offseason. Still, the fact that he’s been consistently flirting with double-doubles this preseason is a great sign.

Now it’s your turn. Let us know in the comments below what you expect to happen in this game.

By RotoRob
Tags: Chicago Bulls, Cleveland Cavaliers, NBA
This entry was posted on Tuesday, October 27th, 2015 at 12:50 pm and is filed under BASKETBALL, Game Preview, RotoRob. You can follow any responses to this entry through the RSS 2.0 feed. Both comments and pings are currently closed.