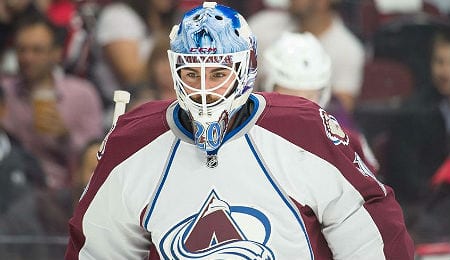 Reto Berra is proving to be a tremendous backup. (Marc DesRosiers-USA Today Sports)

Welcome back to another week of Fantasy hockey. The Blue Jackets finally won a game; Flyers forward Michael Raffl dodged a bullet after taking an elbow to the head, but Buffalo left winger Evander Kane may not have been so lucky after a knee-on-knee play. Don’t bet on seeing Kane return quickly. But if you are seeking to lay some cash down, we’d suggest perusing these betting options for US bettors.

Dakota is off this week, so the NHL waiver wire picks fall to your trusty editor. And now to this week’s choices…

Reto Berra, G, Colorado Avalanche (ESPN: 26 per cent; CBS: 13 per cent): Seeking a backup that could start forcing his way into more games over the course of the season? We’ve loving what we’re seeing early on from Berra. A week and a half ago, the Swiss goaltender turned aside all 35 shots by the Ducks to record his second career shutout and with the Avs playing four times this week, he should see more action — especially with starter Semyon Varlamov putting up some stinkers lately. Now if Berra can just get his blueliners to stop making awful passes (see video below).

Vincent Trocheck, C, Florida Panthers (ESPN: 6.2 per cent; CBS: 19 per cent): Trocheck has moved up to the No. 2 line thanks to Aleksander Barkov’s broken hand. Trocheck has already opened eyes with a four-point game earlier this season, and he now has six points through eight games. He saw a lot more action last year, but Florida’s 2011 third rounder looks poised to take his game to a new level, so jump on his train now.

Mikkel Boedker, LW, Arizona Coyotes (ESPN: 21 per cent; CBS: 35 per cent): Slow start? Whatever. After his hat trick Saturday against the Senators, Boedker now has four goals in his last three games, so pounce on him while you can. His ice time is way up, and the production will follow.

Tobias Rieder, C, Arizona Coyotes (ESPN: 41.3 per cent; CBS: 29 per cent): Boedker isn’t the only forward worth considering from the desert as Rieder looks poised to enjoy a fine sophomore effort with five points already. Rieder has been getting over 18.5 minutes of action in the last couple of games and is one of many youngsters making impressive contributions for Arizona early on.

Joel Ward, RW, San Jose Sharks (ESPN: 3.7 per cent; CBS: 17 per cent): Ward potted his second career hat trick on Saturday, giving him five tallies already — all within the last three games. No, he’s not this good (we only projected him for 16-19-35), but yes, he deserves your Fantasy attention right now.

Boone Jenner, C, Columbus Blue Jackets (ESPN: 3.5 per cent; CBS: 30 per cent): As we alluded to in our intro, there hasn’t been much joy in Columbus early on, but Jenner’s fast start is one of the few bright spots. He ripped a pair of goals Saturday to run his season total to five through eight games. Jenner’s second season was forgettable thanks to injuries, but he looks like he’s ready to take a nice step forward now, especially if he’d start regularly getting over 15 MPG of ice time.

Thomas Greiss, G, New York Islanders (ESPN: 6.4 per cent; CBS: 18 per cent): Greiss may not the be the No. 1 goalie for the Isles, yet he’s appeared in half of the team’s games so far, winning his last three in impressive fashion. At this rate, he’s going to blow past our projection of 20 games played.

Ryan Murray, D, Columbus Blue Jackets (ESPN: 2.2 per cent; CBS: 27 per cent): Murray’s ice time seems to be down a bit now that John Tortorella has taken over as the coach in Columbus, but the blueliner has fired a goal and two assists (both on the PP) in the last two games. Murray showed promise as a rookie, but injuries cost him most of 2014-15, so this is a kid with serious upside and he’s widely available in all formats.

Lee Stempniak, RW, New Jersey Devils (ESPN: 24.6 per cent: CBS: 11 per cent): Stempniak is playing on the top line in New Jersey, centred by Adam Henrique and playing opposite Mike Cammalleri, and all three are rolling. Over his last four, Stempniak has two goals and three assists and should completely erase the memory of some recent down seasons if he maintains this pace.

Alex Burrows, LW, Vancouver Canucks (ESPN: 1.8 per cent; CBS: 19 per cent): Burrows is no longer a 50+ point player, but with four points and a +3 rating in his first seven games, he’s off to a nice start and deserves consideration. He still has some decent playmaking skills.

By RotoRob
Tags: Colorado Avalanche, Fantasy Hockey, Reto Berra
This entry was posted on Sunday, October 25th, 2015 at 10:39 pm and is filed under HOCKEY, RotoRob, The Wire Troll. You can follow any responses to this entry through the RSS 2.0 feed. Both comments and pings are currently closed.