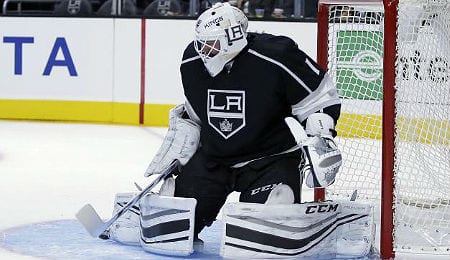 The defensemen and forwards are now done, so today we turn our attention to the goalies as we continue our Fantasy hockey free agency recap.

The Contract: One year, $1.25 million, with the Los Angeles Kings.

Analysis: We always thought of Enroth as the Sabres’ goalie of the future and believed he had the potential to be a starter in the NHL. Considering how cheap the Kings signed him for, we think they were able to sign a solid backup for a very team-friendly price. However, we don’t like this deal from Enroth’s perspective for reasons we will get into below.

Fantasy Impact: In the past five seasons while playing on the Sabres, Enroth has posted a save percentage of .907, .917, .919, .911 and .903. Those might not seem like great numbers, mostly because they aren’t, but you have to remember that he played on some really bad teams. The last time Buffalo was a top 20 team was in 2011-2012 and the last time it wasn’t in the bottom six was in 2012-2013, when it finished 23rd overall. It seems the only time Enroth wasn’t being swarmed was when he was warming up (see video below).

Considering this, we’re only going to look at Enroth’s first three seasons when the Sabres weren’t insanely terrible. In 2010-2011, his adjusted save percentage was .929, ranking 16th out of a group of the 21 most prominent starting goalies in the NHL.

In 2011-2012, Enroth’s adjusted save percentage was .931, 13th in that same group of goalies. It was higher than Carey Price and Pekka Rinne and just behind Craig Anderson, Antii Niemi, Jimmy Howard and Tuukka Rask. The following season, Enroth had an adjusted save percentage of .934, ranking eighth — higher than Roberto Luongo, Braden Holtby, Rinne and Brian Elliott and just behind Corey Crawford, Henrik Lundqvist and Jonas Hiller.

However, we think signing with the Kings could be really bad for Enroth. If Jonathan Quick gets hurt, then Enroth will finally be able to start on a good, defensively-reliable team. However, if Quick doesn’t get hurt, that could spell a lot of trouble for Enroth. We don’t see a scenario in which Quick is healthy and plays less than 70 games, meaning that Enroth may only around 12 starts. Obviously, that would make Enroth’s Fantasy value plummet and could really hurt his career.

The Contract: Two years, $3.25-million contract with the Philadelphia Flyers.

Analysis: We like this signing a lot for both sides. The Flyers get a reliable backup goalie and Neuvirth will probably receive an above average amount of games for a No. 2 man.

Fantasy Impact: Throughout Neuvirth’s career, he has actually been a pretty decent goalie. The only time when his save percentage dipped below .910 was in the 2011-2012 season. Other than that, Neuvirth has been able to maintain a save percentage close to the league average (see graph below).

His quality start percentage last season was 53.1 per cent — better than Ryan Miller (52.3) and Michael Hutchinson (52.8), slightly below Sergei Bobrovsky (53.2) and the same as Jimmy Howard. Neuvirth should provide good value to the Flyers and good value to his Fantasy owners.

He will probably play more than the average backup — we’re expecting him to see 30+ games of action. Last season, even though Steve Mason played 51 games, he was reportedly injured four times! It’s not a stretch to think Mason has a good chance of getting injured again, which mean will mean more PT for Neuvirth. GM Ron Hextall has actually said that he thinks Neuvirth is “probably going to play more than the typical backup.” Even if Mason is healthy, the Flyers might want to give him more rest this season.

The Contract: Two years, $3 million with the New York Islanders.

Analysis: Going into last year’s free agency period, we thought Greiss was one of the best backup options out there and after he landed in Pittsburgh, we believed he was going to challenge Marc-Andre Fleury for starts. This year, we’re confident the Islanders got a quality backup for a cheap price and that this signing will pan out better than the Chad Johnson contract did last season.

Fantasy Impact: In 2013-14, Greiss posted a .920 save percentage with an adjusted save percentage of .941 in 25 games for the Coyotes. However, last season he ended up posting a measly .908 save percentage and wasn’t re-signed by the Penguins. So what can we expect from Greiss this season? He’s actually been really consistent up until last season. Below, we created a table of his statistics of the past five years (note that he split the 2010-11 season between the AHL and the Swedish Elite league).

Before last season, Greiss had never posted a save percentage below .912 and was at or above .915 for three straight seasons. Consequently, we think he’s more likely to post a save percentage closer to .920 than .908 this season.

Now it’s your turn. Let us know in the comments below which free agent goalie signing will have the biggest impact this season.

By Scott Maran
Tags: Buffalo Sabres, Carey Price, Dallas Stars, Jhonas Enroth, Los Angeles Kings, NHL, Pekka Rinne
This entry was posted on Sunday, October 4th, 2015 at 10:55 pm and is filed under Free agents, HOCKEY, Player profile, Scott Maran, Transactional analysis. You can follow any responses to this entry through the RSS 2.0 feed. Both comments and pings are currently closed.