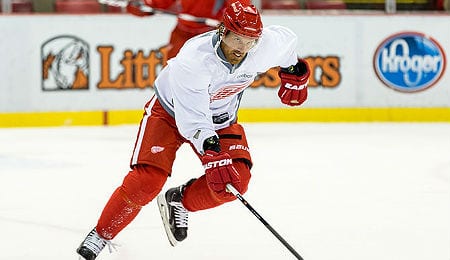 Brad Richards adds depth down the middle for Detroit. (NHL.com)

After wrapping up the defensemen, we continue our Fantasy hockey free agency recap by moving to the forwards.

The Contract: Five years, $19 million, with the Boston Bruins.

Analysis: Going into free agency, we thought Beleskey’s contract was going to be atrocious. There were reports that he was asking for seven years and he turned down a four-year, $16 million contract offer from the Ducks. However, we were quite surprised at how low the cap hit was when it was announced that Boston had signed him. We think the term was one year too long, but overall, it’s a decent contract. If Boston still has any hopes of making the playoffs, which it said it does, it needed a top nine forward.

Fantasy Impact: After looking through all of Beleskey’s data, we opted to do a separate article about his chances for the upcoming season, coming shortly. In a nutshell, we think Beleskey will regress a little but perhaps not as much as some do.

The Contract: One year, $3 million with the Detroit Red Wings.

Analysis: We thought this was a nice, one-year signing by the Red Wings. Richards can still be a decent third-line centre, but we think it would be a mistake if he played a majority of time in the top six.

Fantasy Impact: Considering Richards didn’t even break 40 points last season, we don’t think he has much value (however, he might put some points early on while Pavel Datsyuk is out). We think Richards landing in Detroit is going to be horrible for what little Fantasy value he had. In Chicago, he received power play time, had superstar teammates and a top-six role. In Detroit, we don’t think he will get any of that. But hey, at least he’s happy where we landed (see video below).

Richards definitely won’t get to play next to a Patrick Kane most of the time in Detroit and we don’t think he will get much power play time with Niklas Kronwall, Mike Green, Gustav Nyquist, Datsyuk and Henrik Zetterberg in the mix. The only good thing about going to Detroit is that Richards might get a top-six role while Datsyuk is out to start the season, but we don’t see this situation helping Richards overall. However, we do think it was a decent move by Detroit to add to its centre depth with a one year contract.

The Contact: Five years, $21.5 million with the Calgary Flames.

Analysis: This is a good contract for both sides. The Flames get a second line winger who can chip in 40-to-50 points and drive possession while Frolik gets a long term contract and a top six role.

Fantasy Impact: Heading into the free agency period, many people felt Frolik might have been the best forward available. He is a possession darling and can help out a team in both special teams. Frolik has shown that he drives possession and can be a good second line player (see charts below). 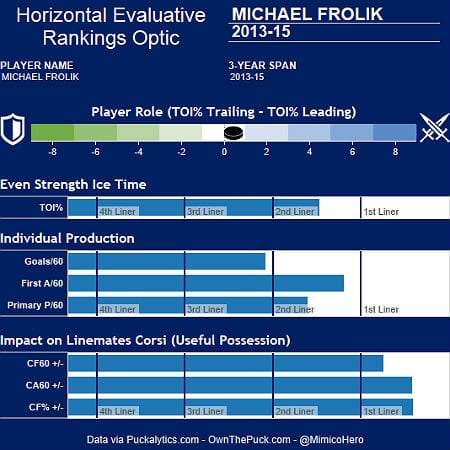 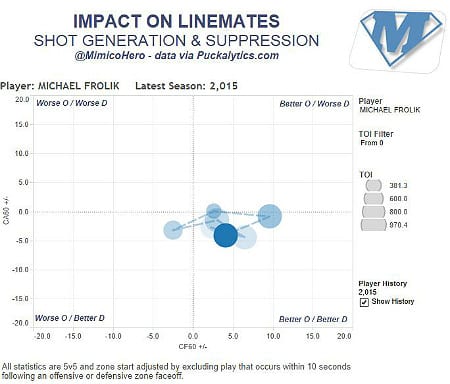 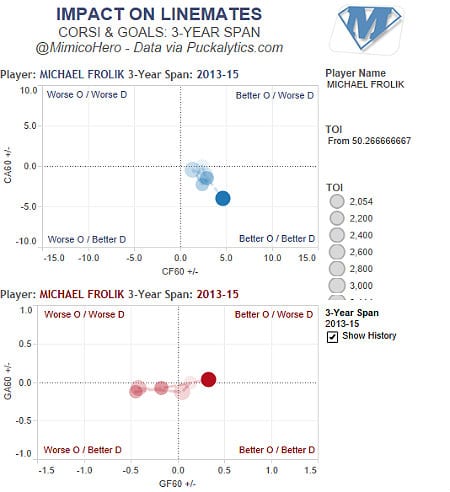 During his two seasons in Winnipeg, Frolik posted 42 points twice and was a great depth player. However, now that the Flames have invested in him long term, we’re sure he’ll be playing in the top six frequently. Most likely he’ll wind up playing with Sam Bennett and will be put in a better position to succeed. While Frolik only scored 42 points last season, the fact that only seven came on the power play is surprising.

If he is given more power play and top six time, we can see him coming close to hitting 50 points for the first time in his career.

The Contract: Three years, $9.75 million with the San Jose Sharks.

Analysis: Given that Ward is 35, we think the Sharks gave him one year too many, but we believe the cap hit is reasonable. For a team that needed a forward to play on the third line but also be able to play in the top six in a pinch, the Sharks didn’t do badly for themselves here.

Fantasy Impact: Throughout Ward’s career, his point total has ranged from 20-to-50. But now that he is going to the Sharks, how many points will he get? First of all, let’s examine why Ward had some extremely low scoring seasons. In 2010-2011, he only had 29 points and just 18 in the following season. In 2010-2011, Ward actually had a career-high 157 shots, but also experienced his lowest oiSH% (Team on-ice shooting percentage) and his lowest shooting percentage.

So Ward’s two low scoring seasons were mostly caused by low shooting percentages and in one season, a low amount of shots.

Below is a graph of Ward’s oiSH percentage, his individual shooting percentage, and his point totals.

So how many points will Ward get this season? If we assumed that he’ll take about 134 shots in an 82 game season (his average amount of shots per season) and assumed he would score on 11.6 per cent of those shots (his career norm), he would score about 16 goals and probably end up with around 20 assists (to calculate how many assists he would get, we got his average FF to determine how many shot attempts he is on the ice for in a given season; next, we multiplied that by his career average oiSH percentage and then multiplied that by his career average IPP to get an average of 35 points).

Now it’s your turn. Let us know in the comments before which free agent forward you think make the biggest difference.

By Scott Maran
Tags: Brad Richards, Detroit Red Wings, NHL
This entry was posted on Thursday, October 1st, 2015 at 11:00 am and is filed under Free agents, HOCKEY, Player profile, Scott Maran, Transactional analysis. You can follow any responses to this entry through the RSS 2.0 feed. Both comments and pings are currently closed.