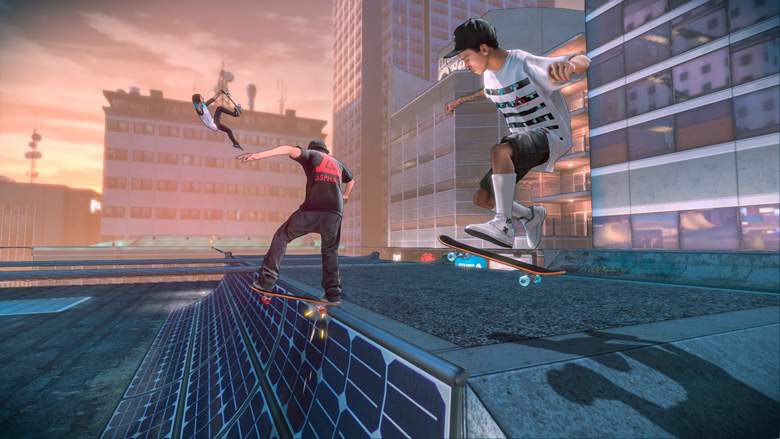 It’s very unlikely that any of these tricks will be landed.

Back in August 1999, gamers the world over were treated to something very special that had never been done before: a skateboarding game that didn’t suck, as the original Tony Hawk’s Pro Skater was released. Before THPS, our skateboarding games suffered from tricky and convoluted control schemes and general cases of “not-fun-ness.”

With it’s amazing soundtrack, friendly and responsive controls and wonderful graphics, THPS paved the way for sequel after sequel, until the titles themselves began to slowly degrade after THPS3. That brings us to the latest installment, Tony Hawk’s Pro Skater 5, a game that had promised to deliver the same arcade-y fun and chaos that once defined the series. But instead…

…we got this. Now, if you’re a veteran of the franchise, you’ll know the basics of spinning, grinding, doing flip tricks and the sort. Square is assigned to flipping your board, circle performs grab moves, triangle allows you to grind along a rail or stall on the lip of a ramp, and the all-important “X” button gets your skater to ollie.

Now, placing that ollie onto a rail successfully is a bit more difficult than it used to be for some reason. In other THPS games, tilting the stick left while grinding along a rail and performing an ollie would make your skater spin that direction with no additional input. In THPS5, you’ve got to balance your grind, perform an ollie and then separately make a new input for your spin.

This may not sound like too big of an issue, but when we compare the playability and speed of the former games to this one, THPS5 is in noticeably worse shape. The left bumper also makes your skateboard shoot blue glitter, which really helps out when you need to bust out a Darkslide before you eat shit on a piece of scenery randomly poking through the ground.

Skaters themselves look alright, as do shirt and board designs, but that’s about it. Everything else looks ripped right from a Nintendo 64 with blurry textures fading in and out, a frame rate that takes a huge nosedive when you turn the camera quickly and characters that clip through just about anything they come into contact with.

One of the highlights of the series has always been the musical selection. This time around, the music goes largely unnoticed and underappreciated because you rarely get to listen to more than 40 seconds of a song, whether you like it or not.

When you’re in the in-game lobby, you can skate around with other people completing simple objectives like collecting S-K-A-T-E or C-O-M-B-O letters, but engaging in another activity will actually load you into a new version of a place you already were. In turn, this skips the song you were listening to, loads another song for about 20 seconds while you complete a task and then switches you back to the “Open” instance of the level again.

So, in typically less than a minute you will hear 3-to-5 songs. There’s also no way to skip or go back, so if you missed your groovy tune then it’s tough rocks, you’ve got to wait at least 10 minutes to hear it again.

Really, THPS5 isn’t all bad. It just isn’t at all good. A terrible collision detection system makes grinding the correct rail a pain in the ass, and landing a spinning grab move is far more difficult than it should be. Many of these problems actually have to do with each skater sucking total ass until you can get them beefed up.

We will say that there are still plenty of THPS-like challenges to complete, like ridding an empty pool of beach balls with your face, but as mentioned above a lot of the time your skater just sucks too bad to effectively complete a goal. In the first tutorial there’s even a ring to jump through located high above a quarter-pipe, and we dare say most players will have to give that at least 3-to-5 tries to snag it.

The rest of the game is comprised of painfully working through sloppy mechanics to earn enough XP to level up your skater, in order to earn enough Stars to unlock the next level. You can also create your own park or download someone else’s, but there are severe frame rate issues on most downloaded parks.

If we were Mr. Hawk, we’d honestly be mad. Not mad that Tony Hawk’s Pro Skater 5 isn’t great, but rather that it’s a perfect example of releasing an unfinished game. Perhaps even a few more weeks dedicated to smoothing out the controls and tightening up some graphical ends could have really had us going to the park every damn day like we used to. Right now? There’s no reason to pick this up over practically any other THPS game. Except Ride.

By Jeff Cater
Tags: Tony Hawk, Tony Hawk's Pro Skater 5, Video Game Review
This entry was posted on Tuesday, October 6th, 2015 at 12:37 am and is filed under Jeff Cater, Video Game Reviews. You can follow any responses to this entry through the RSS 2.0 feed. Both comments and pings are currently closed.