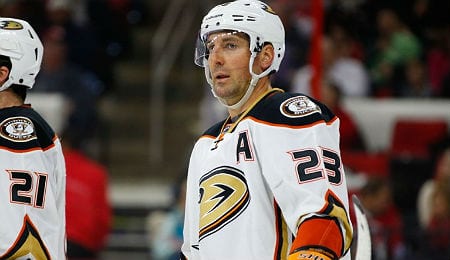 Today we wrap up our look at the key free agent defencemen signings with an examination of Francois Beauchemin’s deal with Colorado.

The Contract: Three years, $13.5 million with the Colorado Avalanche.

Analysis: We’re not huge fans of Colorado’s signing of Beauchemin to a three-year deal. While the term is relatively short, he will be 38 when the contract expires. Given that the Avalanche was in desperate need to improve its defense to get back in a playoff spot, we feel like there were better options. Beauchemin put up only 23 points last season and, given his age, we think Colorado will have to be looking for another top four defender soon. (So while you can, check him out in an Avs’ uni in the video below.)

Fantasy Impact: Beauchemin heading to the Avalanche might lower his point total a little because Anaheim was such a high-scoring team and — last season at least — Colorado was not. The Ducks ranked 10th in goals while the Avalanche was 21st. However, we don’t think that his point total will be too affected by switching teams, but rather that it will drop because last season his shooting percentage was more than double his career average.

In the graph below, we purposely excluded Beauchemin’s 2008-2009 season because he only played 20 games and a small sample size like that would skew the data.

Last season, if Beauchemin shot his career average shooting percentage of 5.2, he would scored about five or six goals (instead of 11), dropping his overall point total down to 17 or 18 instead of 23. Throughout his career, he has only topped 30 points once and that was with the Blue Jackets in 2005-2006 (twice if you assume he wound have done so in the lockout season, when he recorded 24 points in only 48 games).

Now it’s your turn. Let us know in the comments below how you see 2015-16 playing out for Francois Beauchemin.

By Scott Maran
Tags: Colorado Avalanche, Francois Beauchemin
This entry was posted on Wednesday, October 7th, 2015 at 10:25 pm and is filed under Free agents, HOCKEY, Player profile, Scott Maran, Transactional analysis. You can follow any responses to this entry through the RSS 2.0 feed. Both comments and pings are currently closed.