Heading into free agency, Matt Beleskey was said to be looking for a lot of money and lot of years. There were reports that he was asking for seven years and he turned down a four-year, $16 million contract offer from the Ducks. However, Boston was able to sign him to a five-year, $19 million contract. We were very surprised at how low the cap hit was and didn’t think the contract was horrible. We think the term is a little too long, but aren’t most free agent contracts a tad lengthy?

Still, the Bruins faithful seems to have taken to Beleskey already — even when everything he says is unintelligible (see video below).

If Boston still has any hopes of making the playoffs, it needed a top nine forward. But how many points should we expect Beleskey to put up and how valuable of a player is he?

Before we start talking about Beleskey’s value, first we wanted to touch upon his injury history. Let us begin with the fact that he has never played more than 70 games in a season. So if you plan on taking him for your Fantasy team, make sure you have a replacement ready. In the past five seasons, Beleskey has played 65, 55, 42 (during the lockout season), 70 and 35 games. We would expect him to play between 60 and 65 games this season.

Some guys have a tendency to get injured and it would be very surprising if Beleskey was able to play a full season in 2015-16.

The other issue affecting his real world value is the fact that it doesn’t seem that Beleskey has driven possession well throughout his career. Last season was the first time his Corsi For percentage was above 50. In the five previous seasons, Beleskey’s CF percentages were: 46, 41, 46, 42 and 49. Over the same stretch, his Fenwick For percentages have been: 46, 40, 46, 44 and 49 (see chart below). 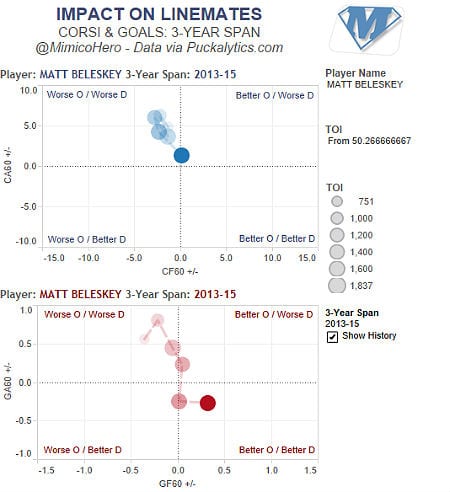 As you can see, this is the first season Beleskey’s CF is out of the top left box and this is also the first in which his GF is in the bottom right box.

Besides the fact he’s injury prone and his ability to consistently drive is in question, 2014-15 might have been a career season for Beleskey and he might not be able to sustain it.

However, as unsustainable as Beleskey’s season may seem, there are certain parts of his game that suggest he might be able to maintain some form of his production. For instance, last season, he received the most power play and ice time of his career (see chart below). This could have resulted in a spike in his production.

Beleskey’s ice time and power play time over the last three seasons has steadily gone up and so has his point total. This means that if he is given more ice time, there still might be room for him to grow. In Boston, Beleskey’s minutes might still go up and maybe he’ll even get more power play time. If you factor this into next season’s projections and his shooting percentages don’t regress too much, he might be able to maintain his pace.

Overall, we think Beleskey will regress, but not by as much as some people believe. His shooting percentages were extremely high, but we maintain that given his new, expensive contract, Boston will give him more minutes and provide him with a lot of chances to score more points.

Now it’s your turn. Let us know in the comments below how you think Beleskey will fare for the Bruins.

By Scott Maran
Tags: Matt Beleskey
This entry was posted on Monday, October 5th, 2015 at 4:24 pm and is filed under Free agents, HOCKEY, Player profile, Scott Maran, Transactional analysis. You can follow any responses to this entry through the RSS 2.0 feed. Both comments and pings are currently closed.