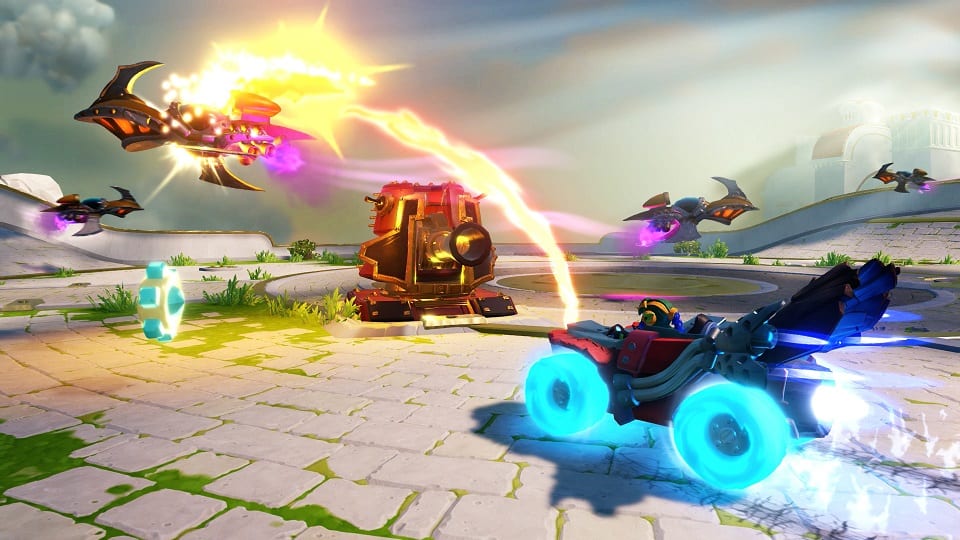 Thankfully, the Skylanders drive faster than they walk.

Another year, another Skylanders. The series, which launched in 2011, has seen annual releases ever since with a new gimmick attached to the traditional characters. Last year’s Skylanders Trap Team had a fairly interesting hook — the ability to capture villains after defeating them — but it didn’t do much to alter the series’ gameplay. That’s not the case this year as Skylanders Superchargers puts a focus on vehicular action.

Although movement speed (the bane of our Skylanders existence) hasn’t been appreciably increased, it’s less of an issue this time because sizable sections of each level is devoted to vehicles. Combat now resides entirely on the face buttons with three attacks and the usual jump. It all works just fine, even though its limitations (read: no dodge) become evident if you increase the difficulty.

Operating vehicles is an uneven experience based on what perspective you’re given. When the camera is behind you or during the basically on-rails sections, it’s great. When things open up and you’re getting essentially a static view of an area it can get bewildering as the controls adjust on the fly, meaning a press in one direction will do different things based on how your vehicle is orientated.

Thankfully, most of the game’s racing sections, including the Mario Kart-inspired sub-game you can play through the Skylanders Academy, adopt the former approach.

One of the consistently enjoyable things about the Skylanders series is the world itself. Characters have a silly charm and locations are suitably varied. It creates a very adventurous feel as you dash around the Skylands to thwart yet another scheme from Kaos. The race tracks aren’t as interesting as the on-foot segments, though, and with them making up a significant chunk of the action it does make things feel a little more homogeneous as you advance.

Everything about the audio, from the soundtrack to the voice acting to the dialogue, is a natural extension of the previous games with the same actors reprising their roles. The only newcomer of note is The Darkness, and he does a good job of fitting right in. Boom.

Master Eon has been captured (and Flynn, Cali and Hugo, too), and Kaos is behind it! This time he has fallen in league with an entity called simply, The Darkness, unleashing a device known as the Sky Eater to lay waste to Skylands. Now it’s up to you, as the Portal Master, and your team of Skylanders to rescue your captured friends and free Skylands from the clutches of Kaos. It’s essentially the same plot from the first four, but hey, if it ain’t broke….

Also returning largely intact is the core gameplay, though a few peripheral tweaks have been made. New difficulty levels have been added to challenge more skilled gamers, but the ponderous movement of the Skylanders doesn’t lend itself to the type of evasiveness you need to avoid damage. There’s also a marked reduction in the bombardment of what are essentially “buy this cool Skylander” advertisements and element-specific areas that peppered previous releases.

This time you can seemingly access any on-foot area with the starter kit, though significant areas are once again off limits without an additional investment. Each level now contains three vehicular zones — one fire, one earth and one water — but the kit only includes an earth vehicle, so you’ll need to spend approximately 30 bucks to play the others.

From a pure gameplay perspective, it’s probably worth it. The vehicular areas are a major departure for the franchise, and they’re by far the most interesting addition compared to previous years. These sections are typically fun and well designed, and the speed at which things move is a very nice change of pace to the plodding Skylanders.

As usual, you’ll spend time mixing platforming and rudimentary combat, collecting gold to upgrade your Skylanders, gear bits to bolster your vehicles, trading cards to augment your Sky Stones deck and hats to apply buffs to your character. The game always feels loaded, but it’s particularly dense this time with a fully fleshed out racing game (think Mario Kart Lite), improved card game and daily tasks to provide incentive to return after finishing the campaign.

Even though the vehicle controls frustrated us from time to time, Skylanders Superchargers is our favourite entry in the series since the original. Unless you’ve been completely burned out on the entire concept, Superchargers is well worth picking up.

By HC Green
Tags: Skylanders Superchargers, Video Game Review
This entry was posted on Friday, October 2nd, 2015 at 12:21 am and is filed under Herija Green, Video Game Reviews. You can follow any responses to this entry through the RSS 2.0 feed. Both comments and pings are currently closed.