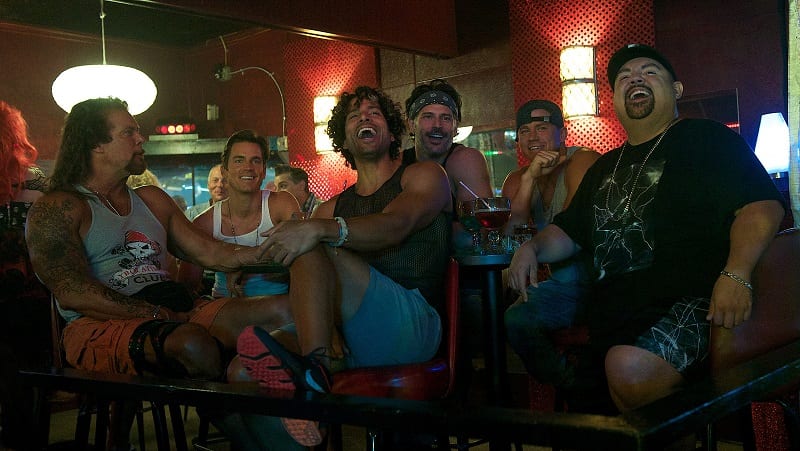 The Kings of Tampa are definitely good for some laughs.

Marriage is about compromise, at least that’s what my wife tells me. So, as a married man, I was witness to the first Magic Mike, a “dramedy” about a stripper with a dream and lots (and lots) of dudes dancing in next to nothing. Fast-forward three years and Channing Tatum is ready to break out his thong with the arrival of Magic Mike XXL. Once again I was joined by my wife for the viewing, but as it turned out the sequel’s comedic angle made it feel a lot less like a compromise than the original.

Mirroring the actual release dates, Magic Mike XXL picks up three years after the events of the first film with Mike (Tatum) now operating a moderately successful furniture business. A cryptic phone call from his former stripping buddy Tarzan (Kevin Nash) leads him to believe Dallas is dead, so Mike goes to meet with his old crew to pay his respects.

It turns out Dallas isn’t dead, however, and has simply skipped town with “The Kid” from the original to start a new show overseas. Now leaderless, the “Kings of Tampa” are planning one last trip to the stripping convention in Myrtle Beach. Realizing he misses his old friends, Mike decides to accompany them on their final ride.

Despite the loss of some star power with no Matthew McConaughey, the returning Kings of Tampa do a nice job of moving into larger roles. Joe Manganiello (True Blood) is the best of the bunch as “Big Dick” Richie, whose reluctance to stop doing his fireman routine and resulting impromptu convenience store dance (done while on Molly) is one of the film’s best scenes. Nash has some good lines and ridiculous hair, and Gabriel Iglesias is funny in an abbreviated role.

All of the humour and random misadventures really equate to one word: fun. It’s a silly, irreverent film that gives each character moments to shine and effectively weaves in a number of supporting roles along the way. And for those that are worried about any male nudity, there’s only one bare ass in the entire film — contrast that with films like Striptease and Showgirls. Oh, and the final performance scene is really well done.

Checking in at nearly two hours, Magic Mike XXL is too long for a comedy. Much of that stems from an interminable visit with Rome (Jada Pinkett Smith) during the middle of the film, which grinds all of the momentum to a halt for a seemingly endless tour of her establishment. As if there isn’t enough time devoted to the Kings of Tampa’s performances, we’re subjected to an awful Michael Strahan cameo in which he does a really awkward routine.

I didn’t time the scene there, but beyond the Strahan segment there’s also another full dance by Malik (Twitch), a singing number from Andre (Donald Glover) and an impromptu “if you want my help you’re gonna need to show me you still got it” dry humping from Tatum. It’s not that any of them do a bad job (other than Strahan), it’s just that it drags on and on when you just want them to get back on the road and headed to Myrtle Beach.

Tatum’s pseudo love interest is Zoe (Amber Heard), a down-on-her-luck photographer who spits out lines that feel heavily scripted. People don’t talk like she talks, and it makes her unlikable.

There isn’t a lot going on with extras. The behind-the-scenes choreography is easily the best of the bunch as you get to hear how they put the routines together. There’s also an extended version of Malik’s dance at Rome’s, which just made me wonder why they didn’t cut more.

To my surprise, Magic Mike XXL is actually one of the better comedies I’ve seen in 2015. Unlike its stars, the film does sag a bit in the middle, but it recovers nicely and ends up being a legitimately fun ride.

By HC Green
Tags: 21 Jump Street, Blu-ray reviews, Channing Tatum, Kevin Nash, Magic Mike XXL, Myrtle Beach
This entry was posted on Monday, October 5th, 2015 at 2:14 pm and is filed under Herija Green, Movie Reviews. You can follow any responses to this entry through the RSS 2.0 feed. Both comments and pings are currently closed.