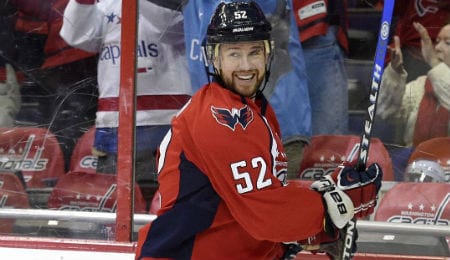 Mike Green will fill a need on the Red Wings. (Russianmachineneverbreaks.com)

Today marks the RotoRob.com debut of Scott Maran, who will break down all the Fantasy ramifications of the NHL free agency period, starting with blueliners.

The Contract: Three years, $18 million with the Detroit Red Wings.

Last Season: Green scored 10 goals and 35 assists in only 70 games to place 19th among defensemen in scoring. He was a plus-15, had 34 penalty minutes and had 17 Power Play points.

Analysis: We ultimately thought that this contract was a great deal for both sides. The Red Wings were looking for a top four defenseman and managed to convince Green to sign for only three seasons. Green, meanwhile, needed a team on which he could receive plenty of ice time and would still get a lot of money. He’s a huge injury risk but when he’s healthy, he can serve as a good top four defender. For what it’s worth, Green sounds excited about being paired with Danny DeKeyser (see video below).

Fantasy Impact: We think Green will continue to provide a lot of offense for Fantasy hockey owners and might actually improve his point totals on the Wings if he stays healthy. He has shown in previous seasons that he can be one of the league’s most dominating offensive blueliners and we think he will build on last season’s performance.
Even though Green won’t be on the absolute best Power Play in the league anymore, he will surely be quarterbacking Detroit’s dynamic unit. Last season, the Wings’ Power Play was second best in the league with a conversion rate of about 24 per cent (Washington clicked about 25 per cent of the time). Also, both teams scored a similar amount of goals last season (Washington 242, Detroit 235).

Considering that Green is heading to a team with a similarly ranked Power Play and one that overall scored about the same amount of goals, he should easily be able to replicate last season’s point totals. He might even be able to break 50 points if his usage changes in Detroit. Last season, Green only received about 19 minutes of ice time per game, making him the only blueliner among the top 20 in scoring at the position that didn’t see at least 20 MPG. In fact, he was only defenseman to reach 40 points despite playing less than 20 minutes per game.

If Green’s ice time goes up in Detroit, he will have a strong chance to break 50 points.

The Contract: Six years, $33 million with the Edmonton Oilers.

Last Season: In 73 games between the Hurricanes and the Kings, Sekera scored three goals and added 20 assists. He was a -3 for the season, only had 14 penalty minutes, and took 100 shots.

Analysis: The Oilers grabbed — in our opinion — the best defenseman out there and got him for a manageable cap hit of $5.5 million a year. Sekera might not be the flashiest defenseman in the game but he sure does get the job done. He’ll be able to stabilize a young and inexperienced Edmonton blueline and will be a great fit for the team.

Our only objection to the deal is that we think the better term for Edmonton would have been five years instead of six but since the cap hit is very manageable, we don’t object too heavily to giving up that extra year.

Fantasy Impact: On an Oilers team with young stars like Conor McDavid, Taylor Hall and Jordan Eberle, Sekera’s point totals will definitely improve. It may be hard for him to reach 40 points again, but it’s not out of the realm of possibility. A main factor in Sekera’s point total will be how much Edmonton improves. Last season, he played most of his games on a Hurricanes team that finished 26th in the league. Even though last season the Oilers finished below the Hurricanes, we think bringing in newcomers Cam Talbot and McDavid, combined with the continued development of the forwards will improve Edmonton.

Consider as well that Sekera will likely get most of the Power Play time and it’s clear he’ll put in a good position to succeed. Last season, he only received about 1:51 per game of Power Play time. Two years ago — which was the season Sekera topped 40 points — he received almost a full extra minute of Power Play time. If he can get a decent amount of extra man time, he can definitely improve his point total. And on a team lacking a good defenseman to run the Power Play, we think Sekera will be given every chance to take that position.

The Contract: Four years, $19.4 million with the San Jose Sharks.

Last Season: In 74 games with the Pittsburgh Penguins, Martin scored three goals with 17 assists. He was a +17, had 20 penalty minutes and had 61 shots.

Analysis: We like Martin a lot and think the Sharks did a great job by getting the cap hit under $5 million a year, but we worry about the term. We think he’s a very underrated defenseman, but how long can he keep being a top four defender? Now 34 , Martin’s play may start declining any season now. The Sharks needed a top four defender and they got a solid one, but age will eventually catch up with him.

However, for a team that can probably only make the playoffs for one or two more seasons (without making some drastic changes), we think this was another good signing.

Fantasy Impact: Last season, Martin managed only 20 points, so wasn’t great Fantasy option. We think this can be contributed to Pittsburgh’s down season and the decrease in productive ice time for him. After all, the Penguins only scored 221 goals, tied for 18th in the league, compared to the previous season in which Pittsburgh scored the fifth most goals in the league (249) and in 2012-13 the Pens potted 165 in 48 games (which projects to 282 in a full 82-game schedule).

The decrease in goals could be a likely cause for Martin’s decline in points. On a Sharks team that only scored seven more goals than Pittsburgh last season, we expect him to produce similar numbers this season. Another factor here is that over the past three seasons, Martin has lost a lot of productive ice time (see chart below). His power play and overall ice time have steadily declined. Obviously this hasn’t helped Martin’s point total.

With Martin going to the Sharks, he probably won’t get an increase in PP time because Brent Burns takes most of it. Also, we don’t see his SH ice time or TOI per game changing. Considering this, we think it would be hard for Martin to hit 30 points this season, but it is possible.

Now it’s your turn. Let us know in the comments below which free agent blueliner you think will have the biggest impact on his new team.

By Scott Maran
Tags: Free agents, Mike Green, NHL
This entry was posted on Friday, September 25th, 2015 at 11:14 pm and is filed under Free agents, HOCKEY, Player profile, Scott Maran, Transactional analysis. You can follow any responses to this entry through the RSS 2.0 feed. Both comments and pings are currently closed.