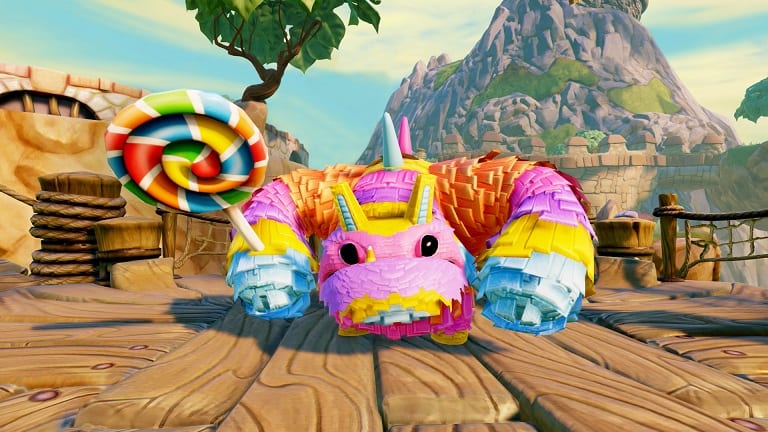 Trap Team has lots of humorous villains, including Painyatta.

It’s that time of year again. The holidays are upon us, and that means Activision is ready to unleash another assault on parents’ pocketbooks with the latest installment of its hit Skylanders. Entitled Skylanders Trap Team, the game features a new gimmick and plenty of new characters, but is it worth dusting off your Portal Master skills for? Let’s find out.

If there’s one area the series has taken a step back from last year it’s with the controls. Three of your four face buttons are used for attacks with the bumpers duplicating your two stronger strikes. The last one is used to jump, while the triggers interact with objects and swap between your Skylander and current villain. That makes up the entirety of your move set, and that means the evasive role from SWAP Force has been removed (nooooooooooooooooo!).

Combat is generally easy enough that you won’t miss it, but its absence is definitely felt when you’re forced to lumber around levels at snail-like speeds with no roll to speed things along. There are also some semi-shielded enemies late in the game that become unnecessarily annoying by your inability to cover ground with anything resembling haste. Some of the game’s legendary hats offer buffs that allegedly increase your speed, but their impact was negligible.

Visually, you’d be hard pressed to notice much progression from SWAP Force to Trap Team, but the series’ technical prowess has never been a selling point. Diverse and whimsical locations abound as you traverse the game’s 18 chapters, encountering a healthy assortment of foes along the way. There are also plenty of cleverly designed villains and bosses to square off against. On the downside, textures are awfully slow to load even on next-gen consoles.

One of the best things about Skylanders has been its dialogue and voice acting. Both of those trends continue here with over-the-top performances from the characters we’ve grown to enjoy since the series’ inception. The dialogue is largely nonsensical and played for chuckles, which is fine even if it makes it a little tough to follow the actual story arc. One other bright spot is how voices from the villains you’ve captured now emanate from the portal itself.

Stop us if you heard this one before, but Skylands is in trouble and it’s up to you, the Portal Master, and your Skylanders to save it. This time the relentless Kaos has released a group of nefarious villains called the Doom Raiders from prison to help him realize his ultimate goal of doing evil stuff. The bald baddie has his power usurped, however, and the Doom Raiders essentially splinter off to follow their own pursuits with The Golden Queen emerging as the pseudo leader.

This setup makes for a very segmented game as you work to capture the Doom Raiders in order of weakest to strongest — think of it as a much more kid friendly version of Kill Bill — with minimal cross over between them. Maybe it was time to brush Kaos aside for a while, but it comes at the cost of some continuity and makes it feel like you’re just drifting through the story and checking the names of Doom Raiders off your list one by one.

Structurally, Trap Team follows established patterns as you’ll smash objects, fight enemies and progress through fairly linear levels with branching paths that require additional Skylanders to reach. What is new is the ability to capture a series of villains after defeating them. Once in your possession you’re able to bring them on future missions and switch freely between your Skylander and captive villain.

Of course, you’ll only be able to capture these villains if you’ve got a trap of the proper element. So if you stick with the default starter pack that means you’ll be limited to water and life villains — to catch ’em all another six traps are needed. Only “trap master” Skylanders can access element-specific paths as well, which means another seven are required to reach all areas of the game. Combine all that with the cost of the Starter Pack itself and we’re talking more than US$200 here. Pricey.

In addition to the combat and rudimentary puzzle solving, Trap Team also employs a range of mini games and tertiary activities (such as manning turrets). The best of these is Skystones Smash, a card game with three slots on either side. Cards, earned by defeating trappable bosses, are then played, each of which has health/damage numbers. Adjacent cards battle each other, while those that don’t have anything across from them damage the other player. Once a player’s health reaches zero it’s game over. It’s simplistic, but younger gamers could get into it.

On top of the 10-hour-plus campaign, fully featured modes like Arena and Kaos Challenge are there to sink more time into. Again, there’s nothing dramatically different and no greatly compelling reason to play them — you’ll likely be maxed out on both experience and treasure before you finish the story — but they can still be considered value added.

While we enjoyed most of our time with Skylanders Trap Team, it feels like the series is treading water. That’s to be expected given its successful formula, but it’d still be nice to get a little more diversity in 2015’s offering. Oh, and please make them move faster.

By Herija Green
This entry was posted on Tuesday, October 14th, 2014 at 3:45 pm and is filed under Herija Green, Video Game Reviews. You can follow any responses to this entry through the RSS 2.0 feed. You can leave a response, or trackback from your own site.