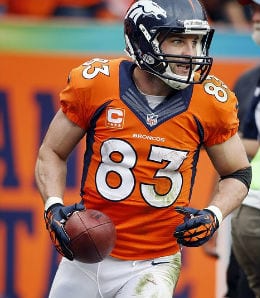 Is Wes Welker healthy enough to return to the NFL? (Nationalnutrition.ca)

As you prepare for Week Four, it’s time to scour the web for tips and advice. Here is a good football article to help get you sorted out.

We were somewhat taken aback by the news coming out of the New York Giants’ camp this week.

One thing is pretty clear based on the big-name players that were working out for the Giants on Tuesday — this is a team that is not particularly thrilled with its current set of pass catchers.

Wide receivers Wes Welker and Hakeem Nicks and tight end Chris Cooley were among those that worked out for the Giants earlier this week.

The timing is a bit surprising given that WR Victor Cruz (calf) will soon be returning to provide an in-house boost to the receiving corps. Originally anticipated to return this weekend, he’s now been ruled out for Week Four after aggravating his injury in practice on Wednesday. Cruz has been out since October 2014.

Yet the Giants are beating the bushes for more help.

Welker was apparently “very quick, very active in here,” said Giants Head Coach Tom Coughlin, but there’s no indication whether the team plans to sign the veteran. Welker spent the last two seasons in Denver, and in each campaign he dealt with concussions (see video below to get a sense of the beating he took) that prohibited him from getting anywhere near the production he managed as a Patriot.

We’re not holding our breath waiting for the 34-year-old to re-emerge as a Fantasy factor.

Nicks, however, is a slightly more interesting project. The fact that Cruz is out increases the chances of Nicks getting picked up by the team for which he had his greatest success. Nicks was cut by the Titans in training camp and failed to land a job after working out for the Cowboys. Just 27, he was not targeted nearly as much as usual last season with the Colts, and is just four years removed from back-to-back 1,000-yard campaigns. Could returning to New York spark Nicks back to his previous glory?

Former Redskin TE Cooley, 33, is probably the biggest stretch here. After all, he hasn’t played in the NFL since 2012 and he missed huge chunks of three of his last four seasons. Cooley was a solid option when healthy, but he struggled to stay on the field and after two years away from the game, it’s hard to envision a successful comeback.

Now it’s your turn. Let us know in the comments below which, if any, of these receivers has a shot to return to the NFL.

By RotoRob
Tags: New York Giants, NFL, Wes Welker
This entry was posted on Thursday, October 1st, 2015 at 4:06 pm and is filed under FOOTBALL, Free agents, RotoRob. You can follow any responses to this entry through the RSS 2.0 feed. Both comments and pings are currently closed.