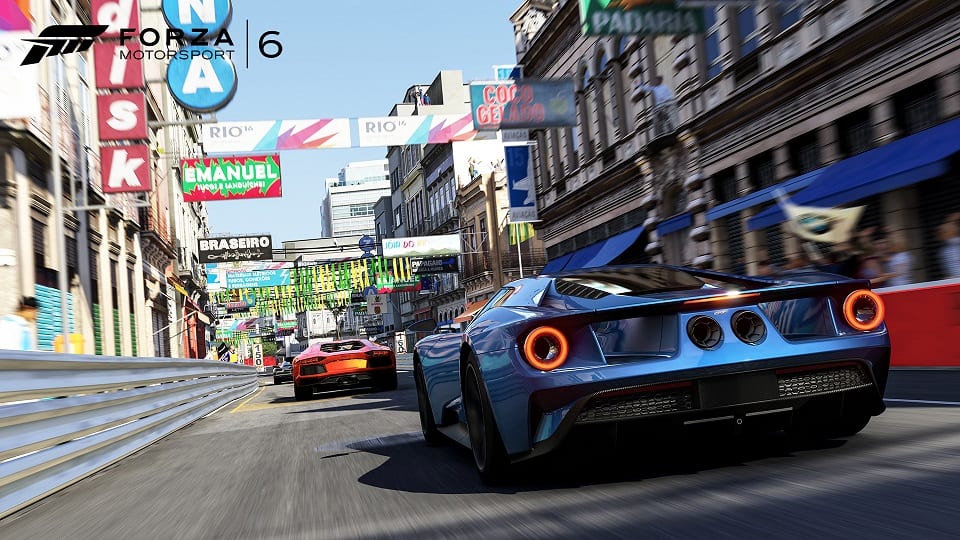 It’s like driving in Southern California, only without the soccer moms.

Even the most ardent of Microsoft detractors would be hard pressed to argue that the company hasn’t done right by racing fans on Xbox One, offering Forza Motorsport 5 as a launch title and following that up with last year’s excellent Forza Horizon 2. Now, as we close in on the console’s two-year anniversary, we’re treated to Turn 10’s latest effort, Forza Motorsport 6. That means it’s time to tune the engines and push the pedal to the metal to put it through its paces.

Simplicity and precision are hallmarks of the Forza series, and both are on full display here as the game will have even the most rudimentary gamer flying around the track in no time. As usual, the right and left triggers accelerate and decelerate your vehicle, respectively, while you also have the option to slam on your hand brake or rewind the action if things go terribly wrong. More experienced racers may want to turn off the rewind function, but it’s a nice inclusion for those that want the option.

Most of the time you’ll feel in full control over your vehicle, regardless of the speed you’re travelling at, though occasionally you’ll spin out or go skidding off the track for no obvious reason. The game will lay out an ideal track to follow on lower difficulty settings to get you accustomed to core concepts like braking into turns, which is helpful. There’s very little to complain about here, especially with the way Forza makes itself accessible to all ability levels.

Gone is the open world of Horizon 2, replaced by an impressive array of tracks. Not only are they diverse in terms of their layout, but they also run the gamut of interesting locations. Glance beyond the confines of the track and you’ll see lush trees, snow-capped mountains, Al Harrington’s Wacky Waving Inflatable Arm-Flailing Tubemen and more. Tracks show wear and tear as you burn rubber, and weather effects are beautifully rendered.

As nice as the surroundings look, the cars are the main attraction with photo-realistic representations of hundreds of makes and models. If we may dip into our Fury Road vocabulary, everything here is both shiny and chrome. If you don’t like the look of your car or the available dealer options, you can always customize the look yourself or browse other users’ uploaded creations.

Things aren’t as impressive on the audio side with a fairly anonymous palette of tracks that have us struggling to remember any of them. It’s not that important, however, as the game actually provides legitimately valuable feedback based on the sounds your car makes (screeching tires, roaring engine, etc.) that will help you get a leg up on the competition.

Career mode serves as Forza 6’s primary single-player offering, taking drivers on a long and winding path that covers numerous different styles of racing. Achieve the race objective for a track and move on to the next until you finish a series. There are 15 series in all, each consisting of multiple races, and as you progress through your career you’ll also unlock Showcase Events.

These showcases permit you to experience different race types, allowing you to drive a much more diverse selection of cars. Events are also put into historical context to help novice racers get a feel for the sport’s rich and varied history. For what it’s worth, these races tended to be among the game’s easiest, to the point that we’d often lap some of the lesser A.I. competitors.

As you progress you’ll earn experience to level up your driver, affinity for the type(s) of car you drive and credits to purchase additional vehicles and mods. Mods come in three flavours: (a) dares, in which you make a race more challenging in exchange for better rewards; (b) boosts, which offer things like an experience bump or better starting position; and (c) crew, who can improve aspects of your vehicle. You can assign up to three per race, though not necessarily from one source.

Multiplayer is also a huge part of Forza Motorsport 6, presenting the chance to take your prized wheels online and test your mettle against the rest of the world. As you’d suspect, it tends to be a much sharper challenge than the computer (at least on modest difficulties), but even when you’re losing you tend to come away with a better understanding of how to race successfully. Games are easy to find, there are a healthy number of tracks and performance has been smooth.

Even when not driving, your Drivatar (a computer-controlled version of you based on your real driving patterns and skills) will race on your behalf, earning credits while you’re away. It’s a cool concept, though we’re unclear as to what determines how often our A.I. doppelganger gets behind the wheel.

Our biggest complaint here is the lack of diversity in the Career Mode’s race objectives. Every time you hit the track you’re asked to finish in the top three. Not only that, but you start in the middle each time unless you use a mod card to improve said position. It allows races to bleed into one another, and it made us want to limit how long we stuck with the mode in a single sitting.

Incredible graphics, exquisite handling and 450-plus cars to collect — Forza Motorsport 6 has all that and more going for it. While it can bog down at times because of a lack of race-to-race diversity, it’s a game that should have you regularly coming back for more.