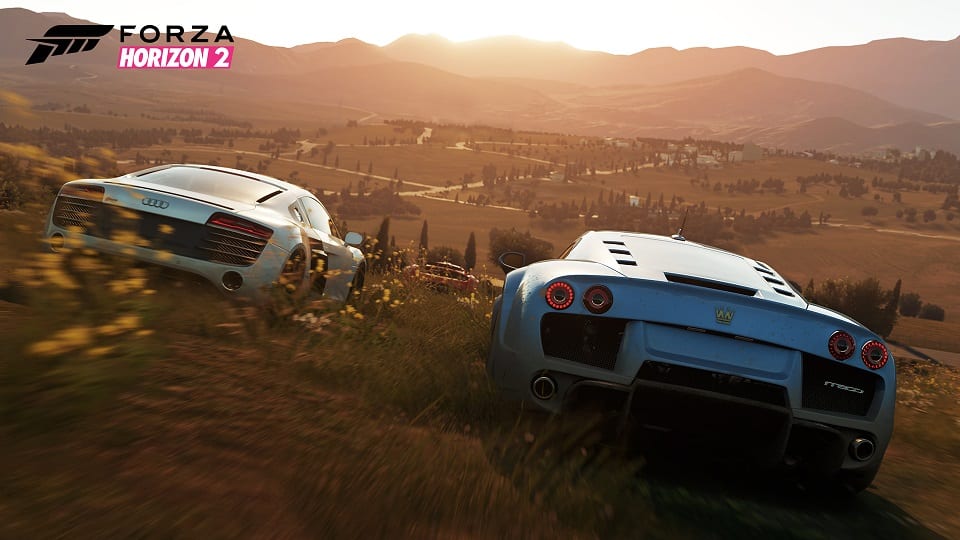 When the Xbox One launched last November, perhaps its most critically acclaimed exclusive was Turn 10’s Forza Motorsport 5. Now, less than a year later, Microsoft is bringing another racing game to its nascent console with Forza Horizon 2 — which is technically a sequel to 2012’s Forza Horizon. Is the series spinning its wheels? Or are they shifting into an even higher gear? Let’s find out (and see how many car-related puns we can squeeze in there while we’re at it).

Operating your vehicle feels immediately familiar with the default setting assigning gas and brake to the triggers and sticking the emergency brake for crazy drifting to the “A” button. The right stick quickly swivels the camera, allowing you to check behind you to see how close other racers are to overtaking you. You can easily toggle racing views as well, going between third- and first-person perspectives to suit your tastes.

Most of the time, Forza Horizon 2 makes racing very enjoyable. Even at high speeds it never feels like you’re completely out of control, and braking, turning and drifting all improve with practice. Mistakes can be erased (at least on lower difficulties) by rewinding the action, which alleviates frustration for those that just want to have fun without having to be ultra-precise.

Racing games always seem to be at the forefront visually regardless of the console generation, and that continues to hold true here. The open world is rich and diverse, and it really keeps things engaging whether you’re actively racing or just driving around looking for collectibles. There’s also a dynamic weather system in place that allows a clear day to turn into a downpour.

Of course, the stars of Forza Horizon 2 are the cars, and the game’s extensive lineup looks awesome with all kinds of sleek lines and eye popping colours. There are plenty of customization options at your disposal as well, and as you play online you’ll get to ogle the tricked out rides of high-level drivers. Damage, which is purely cosmetic on lower difficulty settings, looks impressive.

For as great as the game looks and as smooth as the single-player flows, however, we often ran into an issue in which it would essentially freeze for a few moments before returning to normal. This was with the game downloaded to the hard drive, so it’s not a disc-based issue.

There are plenty of radio stations and musical styles to choose from here, so there’s a good chance you’ll find something you like. Outside of that, most of what you’ll be hearing emanates from the revving of engines and screeching of tires. No complains there.

Like its predecessor, Forza Horizon 2 follows the Horizon Festival, which is a massive series of races set in France and Italy. Your goal is to compete in class championships and win races to make your way up the ladder. There’s an XP-based leveling system in place with different-coloured wristbands marking your ascent through the rankings.

While racing will earn experience and credits (in-game currency), how you race is constantly being judged as well, leveling up a separate skill meter. Actions like drifting, catching air, narrowly avoiding a collision, causing damage, burning out and much more create skill chains. As you get better, these chains can get quite long, allowing you to bank lots of points. You always run the risk of losing them, though, in the same vein as the old Tony Hawk games.

Seemingly every action comes with its own reward, creating a constant sense of progression. Each XP level you gain allows you to spin a wheel to potentially win stuff like new cars and big chunks of credits. Skill meter points are used to buy perks that provide bonuses and so on.

Races are fairly diverse thanks to their locations, and the series’ patented Drivatar system keeps supplying a steady stream of interesting opponents. That’s important because there is a ton of racing championships to shoot for here spread across a bunch of different car types. Multiplayer races are consistently well populated, though it sure seems like there is an inordinate amount of insane crashes no matter how high the levels of the drivers involved are.

In addition to copious races and championships, Forza Horizon 2 is also loaded with extras to encourage you to explore the massive open world. More than 100 sandwich-board type signs are scattered about, rewarding you with experience or a reduction in fast-travel costs for finding and smashing them. There’s a series of bucket list challenges that put you in exotic cars, a photo mode that tasks you with snapping pics of all the different vehicles, barn finds when unique rides are hiding and much more.

Ultimately, though, the game enjoys its most success in how deftly it finds and maintains a balance between simulation and arcade style driving. It’s not cartoonish in any way, but it’s not so grounded in the minutia of tweaking this part or that as to be inaccessible, either. It’s the kind of game you can sink 15 minutes or two hours into, and the time will still be productive — except, that is, for those disappointingly lengthy load times.

Racing games tend to be an acquired taste, but Forza Horizon 2 is so well done that it has the ability to suck in fans and non-fans alike. It’s immediately accessible, consistently fun to play and a great visual showcase for the power of the Xbox One. Even if you aren’t partial to the genre, this is one game that’s at least worth a look.

By HC Green
Tags: Xbox One
This entry was posted on Monday, October 6th, 2014 at 6:06 pm and is filed under Herija Green, Video Game Reviews. You can follow any responses to this entry through the RSS 2.0 feed. Both comments and pings are currently closed.