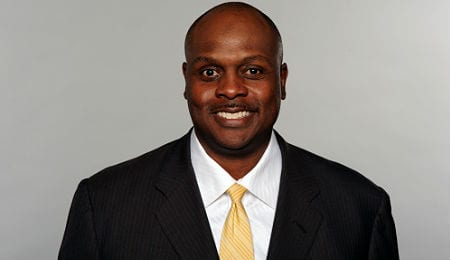 Kacy Rodgers is now in charge of the NFL’s best defensive unit. (wtenews1.com)

Welcome back to our 2015 Fantasy Football cheat sheets. While you consider just how much damage Jason Pierre-Paul suffered to his hand, let’s talk about team defenses and count down the top 20 for the remainder of the 2015 season.

No one likes picking a team defense, but it’s a necessary evil, so you may as well choose wisely. Streaming is always an option — especially given that it’s so hard to predict turnovers and sacks, and that’s what really drives team D numbers.

One word of advice: keep a close eye on the AFC East defenses as they are all vastly improved this season.

1. New York Jets (NR): New Defensive Coordinator Kacy Rodgers heads a unit that should be spectacularly improved this season. Their line is truly elite and the secondary has made great strides to match that level. Expect even more blitzing now that first rounder Leonard Williams has arrived (it was obvious early in the preseason that this kid is special — see video below). Head coach Todd Bowles has a knack for getting the most out of his defensive players, so we expect big things from this group. — RR

2. Buffalo Bills (10): The Bills’ pass rush was pretty awesome last year, but under new Head Coach Rex Ryan, it could reach new heights. Could Buffalo have the NFL’s best D this year? It’s not a stretch as youngsters like 2014 third round pick Preston Brown mature into even bigger forces. This defensive line is one of the league’s best, and it’s going to put some serious blitzing pressure on opposing QBs this year. — RR

3. St. Louis Rams (9): There are those that believe the Rams — not the Jets — could usurp Seattle as the NFL’s top D this year. We’re being a bit more cautious. We’ll need to see the unit maintain the intensity it tends to show in the first half over the course of the whole game. Still, the Rams could lead the league in sacks this season and its defensive line looks fantastic. If nothing else, the unit will benefit from some continuity as defensive coordinator Gregg Williams returns, and it’s been several years since you could say that about a Rams DC. — RR

4. Baltimore Ravens (16): No Ray Lewis or Ed Reed? No problem. After a couple of down seasons, the Ravens tied with the Patriots as the sixth-best defense in the NFL last year and had the second most sacks. We’re hoping the team improves its pass defense this season, but there was nothing wrong with its run D. The loss of Terrell Suggs is going to hurt bad, but this D remains a top five unit. — RR

5. Houston Texans (6): Defense has been the main strength of the Texans in recent seasons, and that will not change in 2015 — especially with Jadeveon Clowney (knee) apparently healthy. Who knows? A healthy Clowney combined with 2014 Defensive Player of the Year and raging beast J.J. Watt could propel Houston to the top of the defensive charts. The team added veteran DT Vince Wilfork, so we are now talking about one seriously dangerous defensive line. — RR

6. Seattle Seahawks (2): The Seahawks remain one of the top units in the NFL, but bear in mind they lost some valuable players, their defensive coordinator and their linebackers coach. Still, there’s a reason this team has gone to back-to-back Super Bowls, and it’s not because of their offensive prowess. DE Michael Bennett anchors a splendid defensive line and Pro Bowlers Kam Chancellor, Earl Thomas and Richard Sherman all return, so you know the Legion of Boom will again have the opportunity to provide plenty of Fantasy gold. — RR

7. Arizona Cardinals (11): Yes, defensive coordinator Todd Bowles is gone, but this unit has some strong personnel returning. The defensive front seven have looked so strong in preseason play, buoying hopes that this is a D on the rise. The injury to Pro Bowler Mike Iupati definitely stings, but new DC James Bettcher still has a solid cast to work with. — RR

8. Miami Dolphins (NR): Well, Miami’s run D certainly left something wanting in Week One a season after being one of the worst in the NFL in that regard. Still, the addition of mean SOB Ndamukong Suh has to help, right? That should be some money well spent by the Dolphis. The adjustments made by the Fins D in the second half were promising, so it’s not all bad news. Hey, there are some that believe Miami can improve to the point of fielding a top five D this year. We’re not among those, but we do believe it’s a much better unit this season. — RR

9. Detroit Lions (NR): For the first time in years, the Lions D was solid in 2014 — up that superlative to “brilliant” against the run — and should remain so this year with nine of the 11 starters returning. Of course, we’d feel a lot better about it once Haloti Ngata takes the field. Still, this is a defense that likely has the depth to survive the loss of Pro Bowler Ndamukong Suh, and that’s why we believe it will be even better in 2015. — RR

10. Denver Broncos (5): With pass rushers supreme Von Miller and DeMarcus Ware aboard, Denver will continue to terrorize opposing QBs. These dudes are likely both among the 10 best in the NFL and Ware will again captain the D. Last year, Denver’s defense did well in terms of yardage (it ranked third overall), but didn’t particularly shine for Fantasy purposes. This year, however, you will see the Broncos rely more on their defense than they have in quite some time, and there are some that think it could be the best unit in the NFL. We’re not among that group (hence our rating), but if nothing else, you’re going to see some serious speed here. — RR

11. New England Patriots (3): The Patriots have used defense to win rings over the years, but it’s definitely been weakened this season — especially the run D. Of course, they seemed to ask the Steelers to run the ball by using a safety-driven scheme. The Pats obviously want to build the unit around the secondary. — RR

12. Green Bay Packers (13): The Packers are hell bent to sport a better run defense this year, but things haven’t started well. It’s clear there’s plenty of work to be done for this team to get to our projection as a near top-10 unit. What’s with all the missed tackles? DC Dom Capers has had plenty of time to mould this D into a great unit, but beyond LB Clay Matthews, it lacks big-time playmakers. Despite hoping to avoid a slow start like last year, Green Bay’s D looked awful in the preseason and has yet to prove it’s capable of taking it to the next level. — RR

13. Carolina Panthers (4): The Panthers were right in the middle of the pack against the run last season, hence their substantial drop in our rankings this year. But the fact that CB Josh Norman had a pick six in Week One certainly represented a nice start as this unit looks to rebound. Holding Jacksonville to just 265 total yards and a mere three third down conversions has to be considered a tremendous season debut. However, if stud LB Luke Kuechly’s concussion proves to be a long-term issue, this unit will slide even further this year. This is a very strong defensive team, but it needs Kuechly (doubtful for Week Two) on the field. — RR

14. Minnesota Vikings (NR): The Vikes’ D is young and has tremendous potential — so much so that this ranking could be blown away by season’s end. Still, the unit looked pretty tired at times in Week One. Last year, Everson Griffen emerged as a force in his first season as a starting DE, leading the team with 12 sacks, 21 tackles for a loss and 70 QB hurries. We love how much young talent there is here… the sky is the limit for Minny’s D. — RR

15. Cleveland Browns (NR): Cleveland’s run D — an area of focus this offseason — sure didn’t look sharp in Week One. Last season, the Browns racked up 21 picks (second in the NFL), which is one of the main reasons they vaulted onto the rankings this year. But if this team cannot defend against the run, it’s doomed to being a middle of the pack unit. The belief is if this team’s D improved enough, Cleveland may finally make the playoffs, but we’ll need to see far better than what it showed against the Jets. — RR

16. Kansas City Chiefs (7): The Chiefs were tied for last in interceptions last year, but the hope is the return of safety Eric Berry can help boost team morale as well as create more turnovers. — MS

17. Cincinnati Bengals (8): The Bengals were opportunistic last year, ranking third in team interceptions. On the flip side, they were dead-last in sacks, so buyer beware. Staying healthy is a major key to this unit’s success in 2015. — MS

18. Philadelphia Eagles (17): For all the attention paid to Chip Kelly’s offense, the defense has some playmakers, too. Last year they were true to form: they gave up a lot of yards, ranking 31st, but were also tied for second in sacks. Expect the same kind of good and bad in 2015. — MS

19. Oakland Raiders (NR): Pressuring the quarterback has been a problem, but an improving Raider secondary — and of course the ageless wonder Charles Woodson — could create some turnovers for your Fantasy team coming off a down year in that department. — MS

20. Pittsburgh Steelers (14): This isn’t the Steel Curtain defense from the ’70s, but Pittsburgh is rebuilding and the D could make a sizable impact in 2015. The secondary is still suspect, but the sack totals should improve after a down year. — MS

By RotoRob
Tags: Kacy Rodgers, NFL
This entry was posted on Friday, September 18th, 2015 at 11:01 pm and is filed under 2015 RotoRob NFL Draft Kit, Cheat sheets, FOOTBALL, McCade Pearson, Michael Seff, RotoRob. You can follow any responses to this entry through the RSS 2.0 feed. Both comments and pings are currently closed.