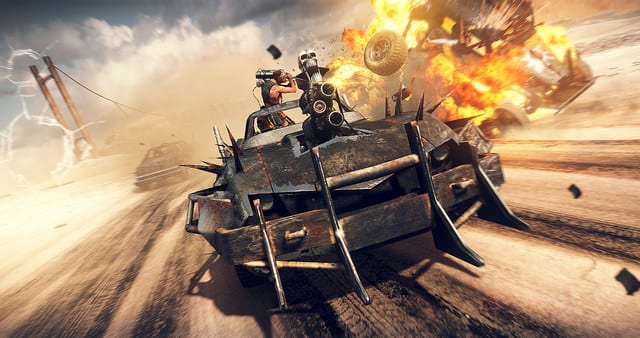 Oh, what a game… what a lovely game!

What do you do if you’re out on the wasteland and a group of schmucks come along, beat you within an inch of life and take your ride? Well, if you’re Max Rockatansky, the answer lies in sweet, sweet revenge. Accompany Max through the wastes, fight, rebuild the Magnum Opus, and ultimately just survive in Mad Max for the PC, PS4 and Xbox One.

Unfortunately, guiding Max around can be a bit tricky sometimes, and engaging enemies while on foot can be a clumsy mess. While on the ground, you can fight with your hands or use your assembled/found weaponry to gain an edge. Using weapons, however, glues Max’s feet to the ground.

To pull your weapon up, you use the L1 shoulder button and fire with circle. Why we don’t aim with the left trigger and fire with the right, we have no idea. Sprinting is bound to the trigger and could easily swap places to make employing weaponry a tad easier.

While walking around, Max seems to be a bit sluggish when it comes to response time, and instead of just changing orientation instantly, he has to make a slight jog motion to turn around causing you to run in a short semi-circle. Sometimes the camera even feels like it’s lagging behind our inputs a little bit.

On the other hand, driving is fantastic and features controls and responsiveness on par with any of the great racing games out there. Gas and brake are thankfully assigned to the triggers. Still, employing a weapon while driving (such as the awesome harpoon gun) is a bit of a finagle because you still use L1 and circle to activate them.

Fortunately, the game goes into slow motion when lining up a shot while driving, so you may carefully aim at your opponents front tire or even the drivers themselves. Gone are the shaky response times of on-foot affairs, making driving very comfortable and fun, which is great because it comprises more than half of the game.

There’s no mistake, Mad Max looks absolutely wonderful despite its foreboding and wrecked landscape. Characters are loaded with detail, featuring wonderfully expressive faces and appropriate clothing for the environment. While driving around, you’ll notice that small boulders and other garbage explodes into hundreds of pieces when smashed through, sending fragments skittering across the sand kicking up dust as they come to rest.

The wasteland itself is packed with small details like skeletons clutching one another, half obscured by a pile of sand, cars blown out and rust torn. The entire visual package makes Mad Max one of the most beautiful games released this year, even though there are slight frame drops during intense car battles or dust storms. It almost looks like one of those unplayable benchmark programs, but it’s not!

When it comes to the sound department, the game might as well be called “Chumbucket’s Quest,” as your little counterpart completely steals the show. His insane ramblings accompany most of your journey, and you’ll quickly find comfort in his crazy phrases and mutterings. Everyone else supplies great voice work as well, it’s just that good ol’ Chum rises above the rest.

Mad Max also features a well put together soundtrack that never is a mismatch for your current situation, be it fighting a group of enemies in a sandstorm or pushing your Magnum Opus to its limits while trying to escape a swarm of enemy vehicles.

Aside from the sometimes sluggish on-foot mechanics, Mad Max plays very well. It’s very much a survival simulator and car combat game wrapped into one, because not only do you need to keep an inventory of gasoline to keep your Opus moving, but you also have to keep Max hydrated in order to replenish health.

Early on, water is extremely scarce and can make early progression very difficult; many times during the first five missions or so we’d have to purposely die and respawn just to get enough health to deal with a given situation.

While most of the game takes place behind the wheel of your Magnum Opus, every now and then you’ve got to hop out to engage in conversation or collect materials. Regular fights will break out, and you’ve got to handle your enemies much like Batman has done in his last few games — rhythm-based combat awarding timing.

If you happen to land enough blows in a row, Max will become “Furious” and start really kicking ass, breaking peoples knees and re-arranging spinal columns. The combat isn’t at all ground-breaking, but it is extremely effective and will be familiar to a large number of gamers.

What is a Magnum Opus without some badass upgrades? Not very Opus-y, that’s for sure. That’s why you have to pick up every piece of scrap you can muster, because although the first tier of upgrades is pretty cheap, the prices quickly ramp up and you’ll have much exploring to do.

Fortunately, scrap can be obtained through the destruction of your enemy’s vehicles or structures, but usually not without a fight. It’s a good thing then that there’s plenty to do while looking for scrap. The wasteland is dotted with freaks, injured innocents and vile enemies. You might pull off the road to give a poor man some water, only to hear the roaring of several engines approaching from the hill nearby. Who said surviving is easy?

Mad Max has a few small issues in an absolutely huge game that’s packed with things to do. While the side quests can get repetitive, that’s only if you decide to approach them the same way every time. If you don’t mind a tricky control scheme and are yearning for some hardcore survival and car combat, pick up Mad Max. It’s quite the achievement.

By Jeff Cater
Tags: Fury Road, Mad Max, Video Game Review
This entry was posted on Wednesday, September 16th, 2015 at 5:29 pm and is filed under Jeff Cater, Video Game Reviews. You can follow any responses to this entry through the RSS 2.0 feed. Both comments and pings are currently closed.