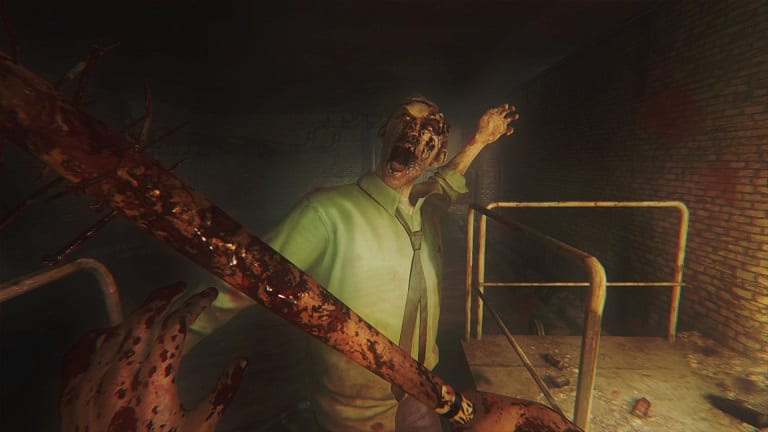 It’s Casual Undead Friday. Guess someone didn’t get the memo.

Originally released in late 2012 as one of the Wii U’s launch titles, ZombiU has been resurrected for the Xbox One, PlayStation 4 and PC. Renamed Zombi, the game features some changes — most notable is the loss of multiplayer — but retains the spirit of the original. That’s a good thing, as despite some warts, Zombi is an interesting and reasonably unique take on survival horror.

Other than the aforementioned loss of multiplayer, the biggest changes centre on taking the original’s Gamepad setup and moving it over to standard controllers. That means the Gamepad-specific actions, such as scanning for items or rummaging through your BOB (bug-out bag), are now mapped to your controller. While this might seem like a loss, the fact that these actions require you to remain still, and therefore vulnerable since the game doesn’t pause, actually heightens the tension.

Unfortunately, combat is arguably Zombi’s weakest element with both clunky melee and imprecise shooting mechanics. It’s a problem despite the focus on atmosphere over action as — while the game isn’t Dead Rising in which you wade through thousands of the undead — you’ll still push the death toll into the hundreds by the time you’re done unless you actively avoid encounters whenever possible.

Enemies are tough, necessitating multiple blows regardless of your weapon of choice (we liked the shovel for its extra reach), and when facing more than two there’s really only one viable way to fight them. This holds true throughout and makes diversity in combat almost non-existent.

Although the game’s roots on a less powerful console are clear from start to finish, Zombi at least does a good job in creating an unsettling atmosphere. There’s a graininess and something of a greenish hue to the many semi-lit areas you encounter, and limited sight is always a smart way to build anxiety. There’s ample blood and bursting body parts as well, helping to maintain the gore factor that the survival horror genre is known for.

Music is used sparingly here, as the game prefers to step back and let the ambient sounds of a zombie-filled London carry the weight. It’s also savvy enough to allow plenty of moments of virtual silence as you’re left to wonder what might be lurking around the next corner. Voice acting is decent, though it fails to resonate in any lasting way.

Things have gone wrong in London. Really, really wrong. Upon starting the game you’re immediately guided to a safe house and introduced (via voice) to “The Prepper,” a man who anticipated the Zombie apocalypse based on the prophecy of historical figure John Dee. He provides you with some necessities and begins dispatching you on various missions.

As you go about completing the Prepper’s tasks you’ll encounter additional survivors — some looking to escape the city, others hoping to find a cure and so on. The common thread is that everyone wants something from you, and you’ll spend the entirety of the game bouncing from one objective to another without much of a “big picture” storyline.

That doesn’t prove to be a deterrent for Zombi, which gets by on its atmosphere and constant looming threat of perma-death. Any time a survivor goes down, their body and all the loot they’re carrying falls where it lies while you start back at the safe house as a new character. Depending on the nature of your death, your original character can reanimate and make it tougher to retrieve your goodies.

While this does add a level of tension, it also ends up completely divesting you of any feelings toward the character. They’re given no personality, no back story and their death is meaningless outside of the loss of items/weapons. Even State of Decay, which featured similar consequences managed to make you feel it since the more you controlled a character the more their skills in various areas improved. Here they’re essentially inventory mules.

If that sounds a little too forgiving for your tastes, Zombi also includes a Survivor Mode in which you’re only given one life. Die, and it’s game over. Considering the nature of some of our deaths in the regular mode — like blown to bits by a Zombie that we had no idea would explode on contact — that seems like an exercise in frustration unless you remember the layout from a previous playthrough.

If you enjoy a more deliberate approach to survival horror, then there’s plenty to like in Zombi. Enough that even its drawbacks (repetitive combat, lack of attachment to your character) can’t keep us from recommending it as a solid investment of your time.

By HC Green
Tags: Ubisoft, Video Game Review, Zombi
This entry was posted on Monday, September 14th, 2015 at 3:02 am and is filed under Herija Green, Video Game Reviews. You can follow any responses to this entry through the RSS 2.0 feed. Both comments and pings are currently closed.