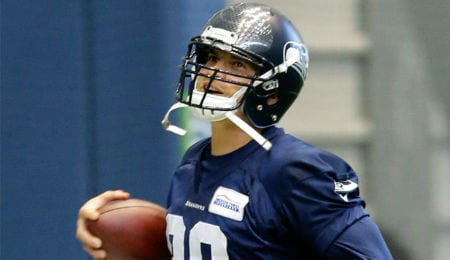 Can Jimmy Graham reclaim his stake as the top tight end? (AP)

Welcome back to the 2015 RotoRob NFL Draft Kit. So while you marvel at the fact that Richard Sherman seems to have Tom Brady’s back, let’s turn our attention to the Tight End position and review the top 20.

The big guns at tight end remain unchanged heading into 2015, although Julius Thomas isn’t as attractive without Peyton Manning feeding him the football — not to mention his busted hand. You can’t go wrong with either of our top two picks; after that, there’s a big drop off. But that’s not to say you can’t get a useful TE, just that if you want one of the big two, you better pounce early. Really, Rob Gronkowski is in a tier of his own; maybe two tiers! Then you’ve got Jimmy Graham and Travis Kelce. After that? Well, good freaking luck, although if you feel like going off board, do keep an eye on Jace Amaro as a dark horse sleeper.

But you can find surprise value if you know where to seek it. Try to look for situations in which a team’s receiving corps is shallow and it’s offense is run by a young QB — that’s ideal breeding ground for a big performance by the tight end.

Some questions heading into 2015: How much will Julius Thomas’ departure affect Denver’s offense? How quickly will Zach Ertz gel with Sam Bradford? How long will it take Antonio Gates to get back in the groove after his PED suspension?

1. Rob Gronkowski, New England Patriots (5): Our All Pro Tight End last year, Gronkowski might finally enter a season completely healthy, so the sky’s the limit here. Who knows? He could even put himself in the MVP discussion. Last year, Gronk played his most games since 2011 and was targeted more often than ever before as his first down numbers bounced back nicely. The man may be a party animal off the field, but he’s simply a beast on it and he has the ring to prove it (see video below). — RR

2. Jimmy Graham, Seattle Seahawks (1): Graham was likely a first rounder in 2014, but he struggled with injuries. Now, he’s slipped behind Gronk. Graham didn’t have quite as many receptions last year, but it was his average yards per reception that really dropped — to a career low, in fact. His TD count was way down as well. In a shocker of a deal, Graham was dealt to Seattle this offseason, and you can bet the Saints will miss his production badly. — RR

3. Travis Kelce, Kansas City Chiefs (NR): Kelce wants the ball, and he wants it bad, so after being the team’s leading receiver last year, it won’t be surprising to see him take his game to the next level this season. He led a solid group of tights ends that helped make Alex Smith a better QB — the wide receivers sure weren’t doing so. Last year, Kelce scored five TDs, which doesn’t sound like much, but that’s five more than any WR on the team had, and he did a good job of keeping plenty of Chief drives alive. At 6’5″, 260, he is a nightmare to guard. — RR

4. Greg Olsen, Carolina Panthers (4): In Week Four, we told you to sit Olsen’s ass on your bench. We hope you listened as he managed just 30 yards on only five targets and failed to score that game. The level-headed Olsen enjoyed a career year last season, his third straight of at least 800 yards. He hasn’t missed a game since his rookie season in 2007 and last year saw his average yards per reception bounce back. Expect to pluck Olsen early in the sixth round of your draft. — RR

5. Martellus Bennett, Chicago Bears (12): So who had more catches than any other tight end in 2014? Yup, it was Bennett — despite the fact that Jay Cutler was doing the passing. Still, Bennett took a massive step forward with his 90 catches, and while he’s reached a half dozen TDs for the first time, he’ll need to hit double digits to really move into the elite at this position. — RR

6. Zach Ertz, Philadelphia Eagles (15): Ertz had core surgery last month, missing the entire preseason as a result, but he’s expected to be ready to start the season on time. He really made big strides in his second season and the Eagles plan to employ him in a variety of roles — even as a kicker and as the third QB. — RR

7. Owen Daniels, Denver Broncos (NR): We considered Daniels for our 2014 Wire Troll All Star team, and now the 10-year vet has been signed by the Broncos, which should provide a massive boost to his value. But let’s not go overboard, here. Yes, he’ll likely get more targets than any TE on Denver, but he’s no spring chicken and there’s competition here. By the way, do you think Gary Kubiak likes Daniels? Daniels has never strayed from Kubiak’s side. Daniels hasn’t played a full season since 2008, but at least he only missed one game last year after playing only five games in 2013. His average reception bounced back a bit, and we’re interested to see how he fares with Peyton Manning feeding him the pigskin. — RR

8. Julius Thomas, Jacksonville Jaguars (3): Thomas has suffered a broken hand that will sideline him for the rest of the preseason and perhaps longer, so make sure you check the latest reports before drafting him. He’s missing valuable time to get in synch with his new QB, Blake Bortles, which is a shame. The Jags showed Thomas the money this spring, but the question remains, how will be do away from Peyton Manning. Last year, he missed three games with injury, so his targets were down, and chances of him bouncing back seem a bit sketchier now. — RR

9. Larry Donnell, New York Giants (NR): Donnell really separated himself from a mediocre group of Giant tight ends with his breakout performance last year. An Achilles’ injury has set him back this summer, but don’t sweat it. Let’s see if Donnell can get off to the same kind of blazing start he did last September and look for him to build on the half dozen scores he managed in 2014. — RR

10. Dwayne Allen, Indianapolis Colts (NR): Allen might fight for numbers somewhat on a Colts team loaded with receiving talent, but he can be very productive if healthy. He missed nearly all of 2013 and was dinged up last season, but still managed to haul in eight TD catches. He should be good Fantasy pickup in 2015.– MS

11. Jason Witten, Dallas Cowboys (8): He’s not fast or flashy, but Witten is as good as they get. Given some changes in the Dallas backfield, he could see his numbers go up a bit and, until proven otherwise, he’s Tony Romo’s go-to guy in the clutch. — MS

12. Antonio Gates, San Diego Chargers (NR): Gates will serve a four-game suspension to begin the season, but the man who kind of revolutionized the position is still a difference-maker. His 12 touchdowns last year were the second-most of his storied career, and if you can wait a quarter of the season, he’s worth a look. — MS

13. Eric Ebron, Detroit Lions (2): Maybe things will work in reverse for Ebron — freshman slump, sophomore sensation. He is poised to break out in 2015 after a disappointing first season in which he caught just 25 passes. Brandon Pettigrew will be more of a blocking tight end, opening up some Fantasy stats for Ebron. — MS

14. Jordan Cameron, Miami Dolphins (7): Cameron could benefit by finally having a stable quarterback situation. He could develop into a reliable target as he was during a career year in 2013. — MS

15. Kyle Rudolph, Minnesota Vikings (11): Rudolph could benefit from a stronger sophomore season from QB Teddy Bridgewater. The hope is Rudolph is healthy after missing nearly half of 2014, and he could be a productive red-zone target for Minnesota. — MS

16. Josh Hill, New Orleans Saints (NR): The new-look Saints are still getting things sorted out, but since they never cease to score points with regularity, expect Hill to gradually build his numbers; last year, he made the most of his 14 catches by scoring five touchdowns. — MS

17. Heath Miller, Pittsburgh Steelers (NR): Miller may be 32, but his age won’t change the trust that Ben Roethlisberger has in him. A decade in the league has seen Miller continue to get open and make plays, as evidenced by last year’s 66-catch season. His touchdown numbers were down in 2014, but he will keep being Big Ben’s go-to guy until something changes. — MS

18. Delanie Walker, Tennessee Titans (NR): No one knows exactly what Marcus Mariota’s rookie season will look like, but Walker has quietly been a very productive tight end over the past few years, averaging 14.1 yards on his 63 catches a season ago. — MS

19. Jordan Reed, Washington Redskins (9): The quarterback turmoil in DC won’t do Reed any favours, but he could be ready to break out after two steady campaigns (despite no touchdown catches in 2014). — MS

20. Charles Clay, Buffalo Bills (13): Clay showed some great flashes with the Dolphins last year, but like any Bills pass-catcher, the Fantasy value he provides will be based on how the murky quarterback situation plays out. Clay had a career-high six touchdown catches in 2013 but just three last season. — MS

By RotoRob
Tags: NFL, NFL Draft Kit
This entry was posted on Friday, September 11th, 2015 at 8:36 pm and is filed under 2015 RotoRob NFL Draft Kit, Cheat sheets, FOOTBALL, McCade Pearson, Michael Seff, RotoRob. You can follow any responses to this entry through the RSS 2.0 feed. Both comments and pings are currently closed.