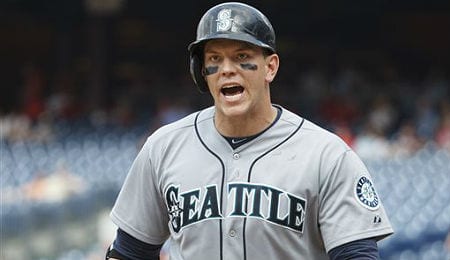 Logan Morrison made some serious noise early this month. (AP)

As the season dwindles down, here are some names to pluck off the waiver wire to help resuscitate your fledgling Fantasy hopes.

Jedd Gyorko, 2B, San Diego Padres (ESPN: 20.4 per cent owned; CBS: 26 per cent owned): It wasn’t too long ago that people were labeling Gyorko as a major bust. Slowly but surely, he is turning those jeers into cheers in San Diego, powering up for four home runs already in September, including a monster three-run blast on Wednesday (see video below). Gyorko has responded quite well to a June demotion to Triple-A and could help give your Fantasy lineup some pop down the stretch.

Logan Morrison, 1B, Seattle Mariners (ESPN: 5.8 per cent; CBS: 18 per cent): Morrison started September on a tear, blasting three homers and driving in 10 runs in his first four games. Though he has cooled a bit, he’s still worth a look if you need a spark at first base.

Jed Lowrie, 3B, Houston Astros (ESPN: 14 per cent; CBS: 34 per cent): Lowrie has turned around what looked like a lost, injury-riddled season. He is maddeningly inconsistent, but is supplying some power and run production of late for the contending ‘Stros.

Rick Porcello, SP, Boston Red Sox (ESPN: 31.4 per cent; CBS: 48 per cent): Speaking of turning around a lost season, Porcello suddenly looks like his old self for the resurgent BoSox. He struck out 13 earlier this month in a start against the rival Yankees.

Sean Doolittle, RP, Oakland Athletics (ESPN: 23.3 per cent; CBS: 26 per cent): Doolittle is healthy and will get whatever little save opportunities the last-place Athletics provide him the rest of the way. His command is always his best asset, as he hardly walks anybody and generally piles up the strikeouts.

James McCann, C, Detroit Tigers (ESPN: 7.8 per cent; CBS: 18 per cent): McCann’s bat has steadily improved throughout the course of the year, even as the Tigers’ season has plummeted south. He doesn’t have a ton of pop but is starting to pile up RBI.

Elian Herrera, 3B/2B, Milwaukee Brewers (ESPN: 2.6 per cent; CBS: 2 per cent): Herrera flashed some pop by homering in both games of a doubleheader last week and has made a mild impact for the Brew Crew, who have undergone many big changes in 2015.

Domingo Santana, OF, Milwaukee Brewers (ESPN: 8.9 per cent; CBS: 15 per cent): Santana, who was picked up in the Carlos Gomez trade with Houston, is also getting a chance to shine for the Brewers, hitting at a consistent clip since arriving in Milwaukee.

Chris Colabello, OF/1B, Toronto Blue Jays (ESPN: 41.7 per cent; CBS: 40 per cent): Remember the beginning of 2014 when Colabello was an RBI machine, but then faded and lost PT? This year, he came up in May, and other than a July swoon, hasn’t stopped hitting. Colabello is not seeing as much PT as he had, but with a 1226 OPS in September, he can definitely help you.

Anthony DeScalfini, SP, Cincinnati Reds (ESPN: 23 per cent; CBS: 46 per cent): Look no further than what DeScalfini has done against the powerhouse Cardinals as a rookie this season to get a sense of his potential. On Saturday, he fanned a career-high 10 to move to 3-0 with a 1.42 ERA and 22 Ks against four walks in 19 IP against St. Louis. DeScalfini now owns a 2.08 ERA over his last four starts, so ride the kid down the stretch.

Dustin Ackley, OF, New York Yankees (ESPN: 0.7 per cent; CBS: 6 per cent): Ackley is seeing time at first base with Mark Teixeira done for the season, and who knows? Maybe putting on the Pinstripes will revitalize what’s been an awful career so far for Ackley, the second overall pick in 2009. He’s scored runs in each of the last two games, pounding a three-run dinger to key the Yanks win on Sunday.

Logan Verrett, RP. New York Mets (ESPN: 1.8 per cent; CBS: 5 per cent): With the Mets skipping Matt Harvey to preserve his inning count, Verrett will start on Monday. As a long reliever/spot starter, Verrett has contributed nicely to the Mets as rookie. He looks like a superb streaming option given his recent performance.

Marcus Stroman, SP, Toronto Blue Jays (ESPN: 36.4 per cent; CBS: 46 per cent): Stroman surprised many by returning from an ACL injury that was originally expected to wipe out his season. His control was not sharp in a couple of minor league tuneups, but he managed to beat the Yankees on Saturday with five strong innings. Stroman won’t last on the wire long, so pounce quickly, my peeps.

By Michael Seff
Tags: Houston Astros, Jed Lowrie, Jedd Gyorko, Logan Morrison, San Diego Padres, Seattle Mariners
This entry was posted on Sunday, September 13th, 2015 at 11:04 pm and is filed under BASEBALL, Michael Seff, The Wire Troll. You can follow any responses to this entry through the RSS 2.0 feed. Both comments and pings are currently closed.