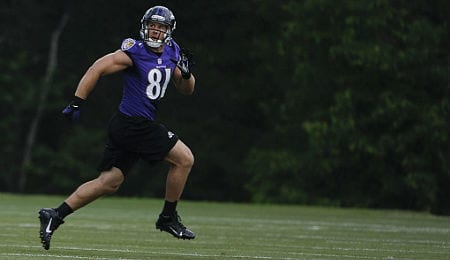 By Vaney Hariri and Josh Johnson

The timid and meek may not want read articles like this. Our hope is that together we can push the needle into the Fantasy playoffs. We realize it’s tough each and every week and that’s why we are at your service with your Start ‘em or Sit ‘em picks for Week Eight. — JJ

Reggie Bush, RB, Detroit Lions @ ATL (in London, England): Bush has been relatively disappointing this year (we slotted him 15th in our Running Back Rankings) with his normal rash of nagging injuries, and a trip to London most likely won’t help, but facing a poor Atlanta defense that has a particularly difficult time with shifty running backs makes this a favourable match up. Hey, if nothing else, Bush has done some impressive pimping (see video below). — VH

Owen Daniels, TE, Baltimore Ravens @ CIN: With the Ravens’ recent scoring burst, it seems now that Baltimore receivers are starting to garner quite a bit of attention which should leave Daniels available to be this week’s star. — VH

Alex Smith, QB, Kansas City Chiefs vs. STL: The Rams overall aren’t too bad on defense, but they are not very good at stopping opposing quarterbacks — especially ones that can move around, which, surprisingly, Smith can. — VH

Hakeem Nicks, WR, Indianapolis Colts @ PIT: The Colts offense is clicking right now but they will be without mainstay Reggie Wayne for at least this week. Rumours have been circulating about rookie Donte Moncrief gaining favour over Nicks in the WR rotation. The loss of Wayne bumps them both up a notch and while Moncrief might see more snaps early, look for Nicks to be a key contributor late. Nicks’ slender 6’5″ frame makes him a solid option in the red zone. — JJ

Matt Ryan, QB, Atlanta Falcons vs. DET: We often ask what has happened to Matty Ice? Well after the last few weeks, it has become clear what the problem is — an oft-injured Swiss cheese offensive line. Couple that with the fact that they will be facing one of the best defensive lines in the league and it doesn’t bode well for Ryan. — VH

Giovani Bernard, RB, Cincinnati Bengals vs. BAL: Facing a tough defense with sore ribs is not an ideal mix, which is why it would make good sense for the Bengals brass to limit Bernard’s touches. Against an already stout D, that’s enough for us to look elsewhere. — VH

LeSean McCoy, RB, Philedelphia Eagles @ ARI: In six games, McCoy has just 422 rushing yards. He is averaging 3.6 yards per carry, which is well below his three-year average of 4.8. Now that you know that, you’re probably wondering how the Eagles are somehow 5-1. Our point is simple: they can win without Shady being productive. After all, he has but one TD on the season. The hype around McCoy’s current value is enhanced by the Darren Sproles injury, but you should also know the Cardinals are the top ranked defense against the rush. –- JJ

By Josh Johnson
Tags: Reggie Bush
This entry was posted on Thursday, October 23rd, 2014 at 10:53 pm and is filed under FOOTBALL, Josh Johnson, Start 'em Sit 'em, Vaney Hariri. You can follow any responses to this entry through the RSS 2.0 feed. Both comments and pings are currently closed.