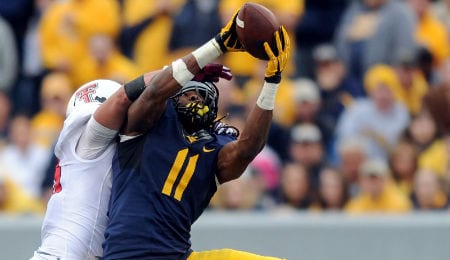 Kevin White (11) has the physical gifts to shine in the NFL. (Pam Panchak/Post-Gazette)

This is about which players will make the biggest Fantasy impact over the next three-to-five years, so that’s why Jameis Winston isn’t number one.

1. Todd Gurley, RB, Georgia Bulldogs: Gurley is coming off a torn ACL, but is a fast (see video below) and explosive running back. He had a few monster games last year that showed his potential. For instance, Gurley went off for 198 yards rushing on 15 carries with three touchdowns against Clemson to open the season. He also had a kickoff return for a touchdown, but usually such scores go to special teams not the player himself. ACL tears aren’t as big of a deal as they used to be and we have seen success from recent rookie running backs (Adrian Peterson, Jeremy Hill, Eddie Lacy, etc.). You’d like to see Gurley catch some more balls but you’ll be able to get around that.

2. Kevin White, WR, West Virginia Mountaineers: White is arguably the most physically gifted wide receiver in this draft class. He measured in at 6’3″, 225 pounds and ran a 4.3 40, much faster than expected. White struggled in his first year at West Virginia, but broke out last year, with 109 receptions for 1,447 yards and 10 TDs. As long as he isn’t a one hit wonder, he should have a long successful career with his amazing athleticism.

3. Amari Cooper, WR, Alabama Crimson Tide: Heisman finalist Cooper has a lot of pressure to become Alabama’s next Julio Jones. Cooper will go into the NFL with a good amount of experience as he was a three year starter, and while he had a huge 2014 season, we like his monster games even more. These include games of 9-224-2 and 10-201-3 plus a 13-244-3 performance in the Iron Bowl. He lacks elite height and if he drops a ball it can get to him, but he should be just fine.

4. Melvin Gordon, RB, Wisconsin Badgers: Gordon looks like a long term stud, but any Heisman finalist will make an immediate impact. He has elite speed, explosiveness and vision — all the tools to be an amazing player. But it could take some time to put those skills into place as Gordon has struggled in the passing game both catching balls and blocking. Nonetheless, he is capable of having a big game on any given Sunday. We all remember the 25-408-4 game which set a record for most rushing yards in only three quarters. However, Gordon’s less heralded 13-253-5 game against Bowling Green was almost as superb. That’s nearly 20 yards a run and he scored a touchdown on almost 40 per cent of his carries that day. Gordon has a minor fumbling problem but that shouldn’t be s major concern.

5. Jameis Winston, QB, Florida State Seminoles: Winston is a proven winner at the collegiate level, but a proven player in the pro style. He has great size but is slow; he’s smart, and a good teammate, but could have some off the field problems. Still, Winston could be a franchise quarterback and he should be a starter from day one. His ability to keep his eyes downfield and use his quality arm will help him in the NFL. Hopefully he doesn’t get off to slow starts like he sometimes did in college, because it’s a lot tougher to come back in the NFL.

6. Dorial Green-Beckham, WR, Missouri Tigers: Green-Beckham is the biggest mystery heading into the draft. He’s a physical monster at 6’5″, 240, but he’s lazy and has major off the field problems. Green-Beckham has been arrested for marijuana possession twice and pushed his girlfriend down the stairs. If he puts it all together, watch out, but he could be a bust if he stays on this path. Green-Beckham is a very high risk pick but he might be worth it.

7. Marcus Mariota, QB, Oregon Ducks: Mariota will be a high pick but will he be a high level player from day one? He has great intangibles, is a hard worker and a leader. Mariota is a three year starter and will do what ever it takes to be number one, but he needs to be more patient and not fumble as much. Roughly 5,200 total yards (4,454/770) and 57 TDs (42/15) got him the Heisman trophy. Mariota only had four interceptions all season, too. If he starts from day one and picks up on a NFL offense he could be a real threat.

8. Maxx Williams, TE, Minnesota Gophers: Williams is in line to be a third generation NFL player. The 6’5″ tight end is a freak of nature with great hands; he will be too athletic and too fast for linebackers but he lacks instincts for the game. The more Williams plays the better he will get. He can block and will be a three down player. Williams has the confidence in himself to be great, and while he’s slightly inexperienced, you don’t see a lot of redshirt sophomores entering the draft but as the best tight end available, he had to go.

9. Jay Ajayi, RB, Boise State Broncos: Ajayi is a big bad running back with a massive frame. He has great hands and figures out ways to get into the end zone. At the very least Ajayi will be a good goal line back in the NFL. He did get benched on a few occasions at Boise State because he fumbles too much, and that could be a big concern. He had 1,689 yards and 25 touchdowns on the ground. Although his receiving continues to impress, he had 45 catches for nearly 550 yards and four touchdowns. Ajayi had a great game against a stellar Ole Miss defense — not only did he go for 86 yards on 20 carries on the ground, but he picked up 12-93-1 in the air.

10. Brett Hundley, QB, UCLA Bruins: Hundley is a long term prospect, and while he will likely never be a starter, if it does happen, he will be a big one. He never plays under centre and likes to run a little too much. However, Hundley will stand in the pocket and take a hit to make a good throw. Sometimes he takes a bit too long before he throws — having got sacked 125 times over the past three years, you hope that it’s an offensive line problem. Hundley needs to work on his weight while throwing as he overthrows a lot of targets.

11. Clive Walford, TE, Miami Hurricanes: Walford, 6’4″, 250, will be a big NFL target. He’s not overly athletic but should be a good NFL tight end. Walford can block and take a hit down the middle. He finished his senior year 44-676-7. However, Walford really impressed the week of the Senior Bowl, running his routes well and showing off some unexpected quickness. He did have meniscus surgery so that is a minor concern.

12. Justin Manton, K, Louisiana-Monroe Warhawks: Kickers are people too, and Manton is an interesting prospect. He has awesome accuracy and nice power. Manton placed kicked and punted in college, but had a punt blocked against Wake Forest that was returned for a touchdown thanks to his slow approach. If he can work on that, he could be a good NFL kicker. If you think Manton will have no Fantasy value, remember that, as a rookie in 2012, Justin Tucker very well could have won you your league.

Now it’s your turn. In the comments below, tell us which NFL draft prospects you think will have the most Fantasy value over the next few years.

By McCade Pearson
Tags: 2015 NFL Draft, Jameis Winston
This entry was posted on Wednesday, April 29th, 2015 at 9:23 pm and is filed under Draft report, FOOTBALL, McCade Pearson, Prospects. You can follow any responses to this entry through the RSS 2.0 feed. Both comments and pings are currently closed.