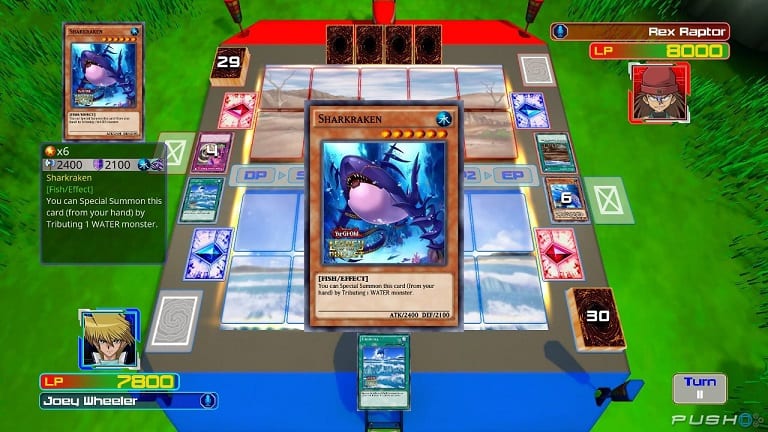 One would do well to fear… the SHARKRAKEN!!!

It has been a long time since Yu-Gi-Oh! first burst onto the scene, but everyone’s favorite spikey-haired duelist is still channeling his gambling spirit and going strong. His latest outing comes from Konami with Yu-Gi-Oh! Legacy of the Duelist, available on both the Xbox One and PlayStation 4. Now it’s time to find out if it’s any good.

In Legacy of the Duelist, you’ll want to scream after picking up your controller. Things are “explained” very quickly with few examples provided on what to do. Thus, it’s not only learning the terminology in the game world that frustrates, the control scheme does so as well. Circle brings up a menu full of abbreviations, which players of the table-top game are probably familiar with in terms of their placement and activities contained.

Whenever a new angle or mechanic would pop up (and there are many), an obtrusive and uninteresting blue dialogue window appears with information. Then the game will start to automatically highlight options for you to simply press “X” through, so you never really learn anything from the tutorial-like introductions. It’s also very difficult to discern when you’re done in a menu because the cursor often hops to the next option or step when a selection is made.

Well, the cards look nice when you can see them. Unfortunately, they are usually squished onto the board with no way to zoom in, only a way to examine each one individually. This makes cohesion between strategies of cards only possible to veteran players. The tables that the game takes place at are largely lifeless and uninspired. Sometimes you are treated to a dragon or golem popping out of the cards and blasting your opponent, and they look pretty decent, but they simply don’t happen often enough to really leave much of an impression.

Onto the sound, or more accurately the near complete lack thereof, as aside from menu selection and the menu’s background music there’s nothing. No spoken words amid an absolute sea of dialogue. When a creature does pop up it’ll roar or growl, but altogether it’s a very quiet experience.

Yu-Gi-Oh!: Legacy of the Duelist serves as a recap for five series of the animated counterpart of the game. First, a robotic historian, INF-N8, dumps blue box after blue box of dialogue on you, and then characters from the show appear to do the same. All of it in stark silence. It’s almost uncomfortable to play because it’s so still.

You and your opponent start at 8,000 life and use creatures that are summoned to attack their opponents with. Trap cards may be placed that provide special effects during battle phases, or you may cast Spells to destroy an enemy creature or buff one of yours. The player left standing at the end of the melee is declared the winner. Considering most monsters’ attack power tends to range from 500 to 1,700, games can come and go fairly quickly, and a smart combo move can drain an opponent’s life force rapidly in just a few short turns.

Unfortunately, the only player this will truly appeal to is a pre-existing Yu-Gi-Oh! fan. The game’s “tutorials” offer little in the ways of explanation or realistic application of cards. For example, the game will set you up perfectly to execute a certain move or summon, but then the rest of the time you’ll have to wade through the other 50-plus cards in your deck and wing it.

On the plus side, you’re able to edit your deck at any time, and there’s a huge library of cards to select from. With the completely unengaging overall experience of actually dueling, however, it’s hard to find much incentive to dive into that aspect of the game. Combined with the difficult menu navigation, it further discourages experimentation.

Die-hard fans may appreciate Yu-Gi-Oh! Legacy of the Duelist, though we suspect playing with a real life opponent would offer a much better and more engaging experience than anything that this game provides. It just feels incomplete in almost every category.

By Jeff Cater
Tags: Konami, Video Game Review, Xbox One, Yu-Gi-Oh!, Yu-Gi-Oh! Legacy of the Duelist
This entry was posted on Wednesday, August 26th, 2015 at 4:59 pm and is filed under Jeff Cater, Video Game Reviews. You can follow any responses to this entry through the RSS 2.0 feed. Both comments and pings are currently closed.