The Wire Troll: Jackie Bradley Jr. Playing Out of His Mind 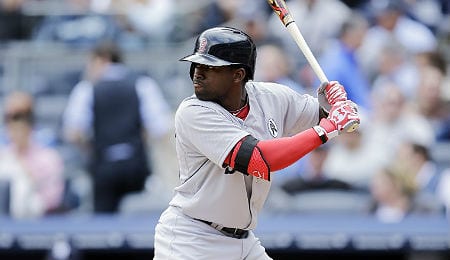 No one is hotter than Jackie Bradley Jr. right now. (fustorthepeople.wordpress.com)

Welcome back to another week of Fantasy baseball. Joe Maddon’s feet are getting pretty stinky as the Cubs keep winning; Marcell Ozuna is happy to be out of “jail;” and Brewer prospect David Denson is the first pro baseball player to come out.

Jackie Bradley Jr., OF, Boston Red Sox (ESPN: 7.5 per cent; CBS: 15 per cent): Bradley went haywire last week, going 13-for-22 with 11 runs, 13 RBI, four doubles, two triples, three homers and a walk over a five-game span. On Saturday, all he did was deliver five extra base hits (see video below). JBJ has earned the right to stay in the lineup for the time being, so jump on him fast.

Drew Smyly, SP, Tampa Bay Rays (ESPN: 28.9 per cent; CBS: 50 per cent): A key component of the David Price trade, Smyly has been limited to 10 starts for the Rays because of injuries. Smyly looked unhittable early on before hurting his shoulder, and he returned to action Sunday. He had a tough matchup against a hot Rangers’ team and the rust clearly showed, but should he finally stay healthy, he could be a major asset down the stretch.

James Paxton, SP, Seattle Mariners (ESPN: 9.7 per cent; CBS: 35 per cent): Seattle’s fourth rounder in 2010, Paxton has struggled with injuries in his career to date, but he’s going to throw a simulated game on Tuesday, so should return from his finger woe very shortly. Stash the talented Canadian southpaw if you’ve got the room — he could be a difference maker in September, and certainly in 2016.

Derek Holland, SP, Texas Rangers (ESPN: 5.9 per cent; CBS: 32 per cent): Holland hurt his shoulder in his season debut, but could be ready to return on Wednesday. Last year, he was out until late in the season as well, earning a recommendation from us when he finally did return. We hope you listened: Holland was a major force in September, goiing 2-0 in six games (five starts), with a 1.46 ERA and just 34 hits (no homers) and five walks allowed in 37 IP. He struck out 25.

Junichi Tazawa, RP, Boston Red Sox (ESPN: 7.6 per cent; CBS: 15 per cent): Perhaps the only reliable reliever left in the Boston bullpen now that Koji Uehara (wrist) is done for the year, Tazawa will ostensibly get some save chances. Now, whether he can convert them is another story, but if you’re trolling for saves, he’s a good pick.

Danny Valencia, 1B/3B/OF, Oakland Athletics (ESPN: 21.2 per cent; CBS: 12 per cent): Valencia was striking out more often for the Jays, but it was still surprising when they DFAed him a couple of weeks ago. Oakland claimed him, and he’s done nothing but hit since joining the A’s. Give Valencia a look in all AL-only leagues and some deeper mixed formats.

Nick Tropeano, SP, Los Angeles Angels (ESPN: 0.6 per cent; CBS: 3 per cent): With Matt Shoemaker being demoted to Triple-A after a few bitch slappings, the Angels need a starter on Thursday. Could Tropeano get the call? He seems the most likely one to go, having last pitched Friday. Tropeano is not having a great year at Triple-A, but he’s struck out 90 in 82 1/3 and has some nice upside, so he bears watching — especially in dynasty leagues.

By RotoRob
Tags: Chicago Cubs, Fantasy Baseball, Jackie Bradley Jr., Joe Maddon
This entry was posted on Sunday, August 16th, 2015 at 9:16 pm and is filed under BASEBALL, RotoRob, The Wire Troll. You can follow any responses to this entry through the RSS 2.0 feed. Both comments and pings are currently closed.