The Wire Troll: Brad Boxberger Breaks Out for Rays 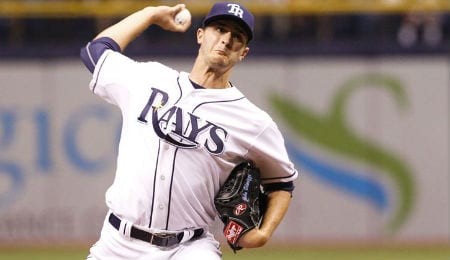 We’re into September now, so this marks your last chance to make a push in the standings. This will be the final MLB Wire Troll of the season… stay tuned for our 2014 Wire Troll All-Stars, coming soon.

This week, Jed Lowrie gave the struggling A’s a spark; Danny Duffy’s shoulder has acted up; and Texas has decided to shut down Yu Darvish for the rest of the season. Now let’s get to this week’s Fantasy baseball waiver wire recommendations.

Brad Boxberger, RP, Tampa Bay Rays (ESPN: 15.4 per cent; CBS: 16 per cent): Back in 2012, Boxberger got a nod from us as the long-time closer in waiting seemed to be getting his act together. His bottom line numbers were sweet, but his poor control promoted a return to Triple-A. Well, he’s back now, and given that he’s playing with the Rays and Pitching Coach Jim Hickey — the master of turning relief pitchers into studs — we are very bullish. Manager Joe Maddon seems to love “Boxy” as well (see video below). Boxberger tossed his sixth straight scoreless outing (and fifth straight hitless performance) Saturday, as he earned the win for the second straight day. He now has five wins, tons of holds, a pile of Ks, a microscopic (0.80) WHIP and a sweet ERA. Boxberger is one of the top non-closing relievers to own right now.

Juan Lagares, OF, New York Mets (ESPN: 37.6 per cent; CBS: 21 per cent): We recommended Lagares in early May, and while he got the job done that month (.280, 11 runs, 11 RBI, 740 OPS), he got hurt in June. Since returning, he’s slowly getting back to where he was, and we love the early returns this month (.375 BA, five runs). Lagares took over as the Mets’ leadoff hitter at the end of August and has responded, hitting safely in six straight games. Give him a look if you need a boost in the outfield.

Derek Holland, SP, Texas Rangers (ESPN: 9.6 per cent; CBS: 31 per cent): In June we recommended Holland as it seemed he was nearly ready to return from knee surgery. However, his recovery hit several snags and the timetable kept shifting as a result. Well, he’s finally back now and he looked simply fabulous in his season debut Tuesday, hurling seven innings of six-hit, one-run ball at a KC team that’s battling for a division title. Holland fanned six and walked none, showing zero rust. He’s facing the Mariners at home on Sunday and looking sharp in the early innings.

Peter Bourjos, OF, St. Louis Cardinals (ESPN: 0.4 per cent; CBS: 4 per cent): We slotted Bourjos just inside the top 80 in our Outfield Rankings heading into the season, but he’s struggled with his contact rates and has barely been a top 125 outfielder as a result. However, he’s hit safely in the last five games he’s started (three multi-hit efforts), and with news that Matt Holliday’s back is acting up again, Bourjos could be a surprisingly useful asset this week.

Chris Valaika, 3B, Chicago Cubs (ESPN: 0.4 per cent; CBS: 1 per cent): Minor league veteran Valaika has come out of nowhere and hit safely in seven of the last eight games for the Cubs and has started to show more patience with two walks in the last three games. For a dude that was supposed to be nothing more than a backup infielder, he’s seeing plenty of action lately, so take note in deeper NL-only leagues.

Aaron Sanchez, RP, Toronto Blue Jays (ESPN: 23.9 per cent; CBS: 18 per cent): Seeking saves down the stretch? Take a look at Sanchez, No. 29 on our Top 65 Prospects list. The youngster has displaced Casey Janssen as the closer for the Jays, who are still very much in contention. With five straight scoreless appearances, Sanchez has his ERA under 1.50 and his WHIP (0.65) underscores that he’s been almost untouchable so far in his MLB career.

Kyle Lobstein, SP, Detroit Tigers (ESPN: 1.2 per cent; CBS: 4 per cent): This lefty was taken 47th overall in 2008 and finally at long last has made his way to the majors and begun delivering on his once bright promise. Lobstein fanned 10 in just 5 1/3 IP on Tuesday against Cleveland. Sunday night, he’ll be charged with helping the Tigers avoid a disastrous sweep at home against the Giants. We think he just might be up for the challenge.

Brent Morel, 3B, Pittsburgh Pirates (ESPN: unowned; CBS: unowned): How’s this for a flier? Pedro Alvarez’s foot is nowhere near healed, and now Josh Harrison has a sprained ankle. Morel wasn’t exactly great at Triple-A this year (710 OPS), but he’s going to get a look at the hot corner in Steel City.

John Holdzkom, RP, Pittsburgh Pirates (ESPN: unowned; CBS: unowned): Another completely off the radar player, September callup Holdzkom has carried on a great minor league season (1.95 ERA, just 15 hits allowed in 27 2/3 IP between Double-A and Triple-A) with two perfect innings, five Ks and one save for the Pirates. It’s been a long trip for the Mets’ 2006 fourth rounder to get the Show and so far, he’s enjoying his stay.

Edward Mujica, RP, Boston Red Sox (ESPN: 18.6 per cent; CBS: 19 per cent): on Saturday, Mujica picked up his fourth save of the season, and seems to have supplanted Koji Uehara for the time being. If you’re desperate for saves down the stretch, Mujica could help.

Brad Miller, SS, Seattle Mariners (ESPN: 3.1 per cent; CBS: 21 per cent): Miller burned us in daily Fantasy baseball a few weeks back when he got a surprise day off, but after a career-high four-hit day Saturday, he’s back in our good books. Note that he’s sitting Sunday with the Rangers starting a lefty.

Crave more in-depth Fantasy analysis? Then join us every Thursday at 9 p.m. EST for RotoRob Fantasy Baseball Weekly Podcast on Blogtalkradio as we entertain and edify you for an hour or more each week. RotoRob’s guest next week will be Peter Kreutzer of AskRotoman.com. Tune in here.

By RotoRob
Tags: Jed Lowrie
This entry was posted on Sunday, September 7th, 2014 at 3:51 pm and is filed under BASEBALL, RotoRob, The Wire Troll. You can follow any responses to this entry through the RSS 2.0 feed. Both comments and pings are currently closed.