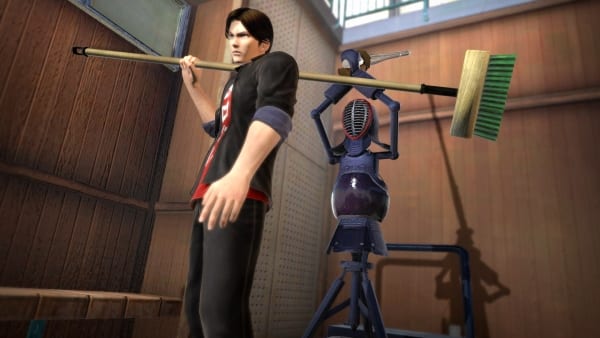 Watch out for the Konami bot behind you!!!

As newcomers to the universe of Deception, we really had no idea what to expect. Given that it was developed and published by Koei Tecmo, we thought it could be a touch weird, but we didn’t know it was going to involve so many spiked walls and rake traps. Enter Deception IV: The Nightmare Princess, where you start your quest for the Dark Lord by trapping enemies in their very dreams. Or, nightmares, rather.

Making your chosen femme fatale’s boob physics jiggle happens when you run around with the left stick, and you can get a better look at them with the right. Locking onto an enemy (usually straight past the boobs) is invaluable when you’re trying to kick them into place with triangle. You can perform an extra action, usually an evasive maneuver of some sort, with square.

Pressing circle brings up a layout of the area and allows you to cycle through the trap placement menus with either the d-pad or sticks, though placing a wall trap can test your patience because the game likes to switch what side of the room you’re trying to place the trap. In case an enemy isn’t close to the trap you want to activate, you can cycle through your set traps via the shoulder buttons.

Deception IV won’t be mistaken for the likes of Tomb Raider or The Witcher 3, as most environments feature low resolution textures and aren’t exactly wide-open vistas. The stages are varied, though, as you’ll go from a Gothic cathedral to a high school gym in a matter of minutes. Character detail, aside from the main women you play as, is pretty low and enemies have a similar feel after a while.

Traps are animated well, though, and are accompanied by nice grunts and screams if employed correctly. As mentioned above, the scientists at Koei Tecmo placed boob physics into the game. While they flap around like Roger Rabbit’s ears if you happen to catch a broadsword to the side of the face, most of the time they just bounce, as if those scientists have perfected gravity-modifying lingerie.

Meshing perfectly with the snapping of bear traps, boulders crashing to the floor and pumpkin heads being dropped from the ceiling is the soundtrack. It has somewhat of an “I’m an evil demon lady who loves the Victorian Era” feel, so expect a lot of pipe organs and frantic tempos.

In Deception IV: The Nightmare Princess, you start off as the second daughter of the Devil, Velgyrie. Everything that people fear while sleeping is within her complete control, or at least it was until she fell into a deep slumber. Her quest now is to return to the dreams of the helpless, restore her power, and drag any living creature into a world of nightmares. Unfortunately, her older sister, Laegrinna has assumed power of that world, and you must clash with her — as devil sisters do.

To restore your full power, you must trap and murder people in humiliating, sadistic and ultra-violent ways. To unlock more traps, you have to complete small side objectives in a level, such as performing a six-hit trap combo, or having to strike an enemy mid-air.

Experimenting with all the horrible and comical devices they give you is very fun and, most of the time, humorous. Watch as Randal the Liar walks helplessly toward the stairs where a boulder awaits his noggin. He’d probably catch on if he didn’t have a Jack-O-Lantern stuck to his head! But that’s Randal’s problem.

Deception IV: The Nightmare Princess also allows you to immediately start a secondary campaign as Laegrinna herself, taunting her sister and contending with trickier foes. A few other characters are able to be played as after you beat them in certain missions, but we found that sticking to either of the two main girls a better experience.

Other than the tricky placement of wall traps and the almost useless defensive/offensive powers, the game plays very well and features a premise we’ve just never heard of: bickering devil daughters fighting over nightmares.

Deception IV: The Nightmare Princess is a pleasantly surprising experience. The only trouble with that is that not enough people are going to know what to expect, and that’s a damn shame because it’s a truly unique and fun title. After nailing a perfect eight-hit combo including both a spring board trap and a chandelier, you’ll look like this.

By Jeff Cater
Tags: Deception IV: The Nightmare Princess, Video Game Review
This entry was posted on Monday, August 10th, 2015 at 4:03 pm and is filed under Jeff Cater, Video Game Reviews. You can follow any responses to this entry through the RSS 2.0 feed. Both comments and pings are currently closed.