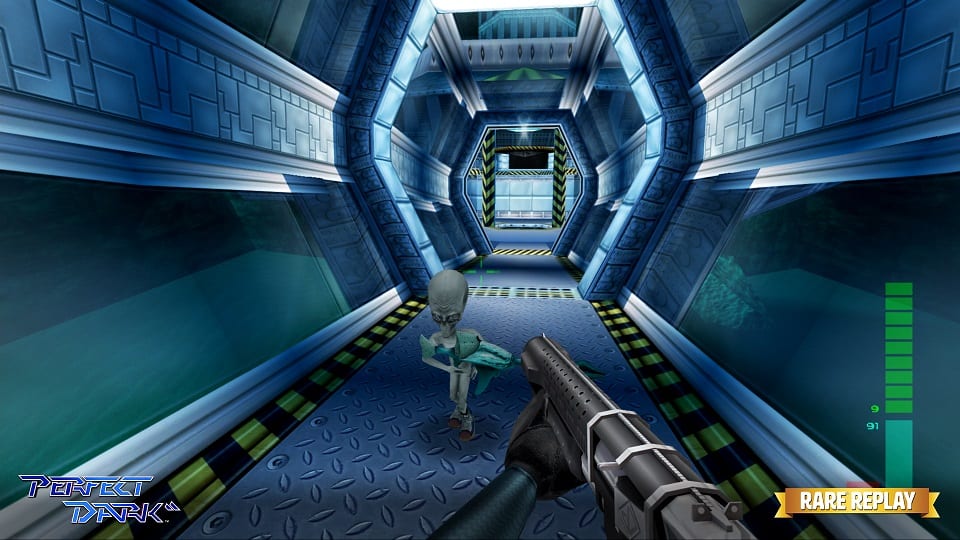 While Perfect Dark is present and accounted for, GoldenEye is MIA.

Thirty years is a long time. In the gaming industry, it’s practically a lifetime. It’s worth celebrating then that renowned developer Rare has been around for 30 years — even longer if you count its time as Ultimate Play The Game, which evolved into the current company in the mid ’80s — and to do that, Microsoft and Rare are teaming up to package 30 of its favourite games into the Rare Replay.

Before we get into what’s there, let’s take a moment to point out what isn’t. Any of its licensed work for Nintendo, which includes the various Donkey Kong games and Star Fox Adventures among others, is absent for obvious reasons. Also missing is one of the company’s most celebrated titles, GoldenEye 007, since it wasn’t a world created by Rare. However the omission is spun, it seems like a miscalculation to leave out such a beloved title (even if spiritual successor Perfect Dark is included).

Although Rare Replay is a 30-year anthology, it actually contains games from a 25-year period, starting with 1983’s Jetpac (released under the aforementioned “Ultimate” banner) and concluding with 2008’s Banjo-Kazooie: Nuts and Bolts — the studio has exclusively released Kinect games since then. It runs the gamut of multiple generations and genres, and while these may not be the best 30 titles Rare has ever created, it’s a largely excellent sampling.

On our favourites side are Perfect Dark (it’s the 2010 remake, not the 2000 original), Conker’s Bad Fur Day, Viva Pinata, Battletoads, R.C. Pro Am and the surprisingly enjoyable Jetpac. There are also several titles that don’t hold up very well, such as Snake, Rattle n’ Roll, Atic Atac and Sabre Wulf, all of which suffer from obtuse controls and confusing objectives.

Granted, you’re able to access the help sidebar at any time to check out the controls, read the story behind the game and a “how to play” section, but it doesn’t always help. Some games are too difficult to wrangle where stuff just sort of happens… and then you die. Still, there’s no reason not to try them all for yourself at least once (you’ll even earn a tidy 15 GS each time).

To help counteract some of those difficulties and make the older games friendlier to today’s gamer, Rare Replay actually allows you to rewind as often as you’d like. While we never timed the exact amount you could go back, it’s pretty generous and enables you to retract enough action that you should be able to get free of danger, at least momentarily.

As a download, it’s worth noting that the Xbox 360 era titles are separate from the main game, though they retain functionality and allow a quick return to the main area. While those titles exist as they did when they initially came out, the older games have been given a series of self-contained challenges (called snapshots) to offer more specific goals to focus on. There’s also several “playlists” that lump together challenges from multiple games with a common thread.

Earning achievements (there’s 10,000 Gamerscore here) and completing snapshots will net you stamps, which increase your rep and unlock a number of video extras. These are well produced and do a nice job of delving into Rare’s history as a company as well as short documentaries about how specific games came into existence. It was great to watch the back story of classics like Battletoads and Killer Instinct, and even games we’re less attached to were interesting to learn about.

If you’re concerned about the technical aspects of rolling 30 games into a single package, please put those worries to rest. Everything about the presentation is well done, keeping things organized with smart menu navigation and minimal load times. It’s nominally clunky the first time you load up the games, but once that runs its course you should be good to go.

Put simply, Rare Replay is an excellent collection of games — one that reminds us how a great studio has essentially been underemployed with its focus on the Kinect. Here’s hoping that this, along with the upcoming Sea of Thieves, vaults Rare back into a much more prominent role.

By HC Green
Tags: Rare Replay, Video Game Review
This entry was posted on Wednesday, August 12th, 2015 at 8:43 pm and is filed under Herija Green, Video Game Reviews. You can follow any responses to this entry through the RSS 2.0 feed. Both comments and pings are currently closed.