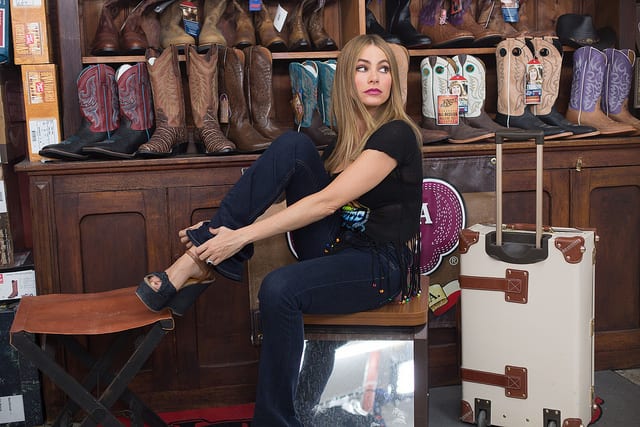 In terms of recurrent movie themes, bringing together two wildly different personalities and having them play off each other’s quirks ranks right near the top. As such, there are countless examples of pairings that worked splendidly (Midnight Run, 48 Hours, The Heat) as well as those that fell flat (Showtime, Cop Out, Double Team). This time, it’s Reese Witherspoon (Legally Blonde) and Sofia Vergara (Modern Family) seeing what kind of chemistry they can drum up in Hot Pursuit.

A second-generation cop that grew up in her dad’s squad car, Cooper (Witherspoon) is as by the book as by the book gets. Her manic/flighty nature lands her in the evidence room after accidentally setting a citizen alight, however, until she’s roped in to help transport a couple set to testify against a major drug lord — rules dictate a woman must be present for the wife, Daniella Riva (Vergara), and, well, Cooper is a woman so she’s selected for the role.

Things go terribly wrong when she and her temporary partner arrive to pick the couple up, which puts Cooper and Riva on the lamb, hunted it would be seem by those on both sides of the law. Cooper is bound and determined to deliver Riva so that she can still testify.

Riva, who detested her husband and his decision to testify, wants no part of it and is looking to escape. Mutual self interest forces the two of them to form an uneasy alliance, but the next double cross is always right around the corner.

Vergara is great on Modern Family, and she’s definitely channeling Gloria Pritchett here. There are times when she gets close to being overexposed — the intentional thickness of her accent works best in small to moderate doses — but that never happens. Just when you think you’ve had enough, the movie will drop in another scene or let Witherspoon take the reins for a bit. Here’s hoping this is just the start of more film work for her as she’s truly a unique presence.

Although she takes a backseat to Vergara, Witherspoon handles the straight role quite well, and willingly downplays her own looks in playing the boyish Cooper. Some of her best scenes come when she gets to take the lead for brief moments (such as her “You just got Coopered!”).

That shouldn’t be misconstrued to imply that the two of them don’t have chemistry when working together, because that isn’t the case. The actresses play off each other very well and seem to be having a lot of fun trying to hold together the absurd plot. There are isolated moments when their pure talent elevates scenes, like Cooper after taking a face full of cocaine, and a handful of funny running gags. They’re definitely making chicken salad here.

Yes, the stars do yeoman’s work, but they were given precious little to work with. The script offers far too much uninspired dialogue and flat punch lines, particularly for Witherspoon, and director Anne Fletcher just doesn’t seem to know when to cut a scene, letting things linger two or three beats longer than they should.

There’s not much for anyone else to do in Hot Pursuit, either, and they seem to know it. Supporting performances, often ripe for scene stealing, are painfully dull across the board. Nowhere is that felt more that with comedian Jim Gaffigan. One of the funnier stand-up comics out there does nothing in his role as Red, standing utterly dumbfounded when Cooper and Riva awkwardly try to convince him that they are, in fact, lesbians. The scene fails, and Gaffigan’s talents are wasted.

Of the four special features, “The Womance” is the one to watch. It reinforces what we see in the film, that Vergara and Witherspoon have very good chemistry — their outtakes for the deer scene are some of the funniest stuff on the Blu-ray. There’s also an alternate ending and a collection of miscues as the stars attempt to speak each other’s language.

Hamstrung by a ridiculous plot and surrounded by flat performances, Vergara and Witherspoon bring enough chemistry and energy to the screen to salvage Hot Pursuit. It won’t be earning a spot in the pantheon of buddy comedies, but hopefully it’s enough for the pair to get another crack at co-starring in something down the road.

By HC Green
Tags: Blu-ray reviews, Hot Pursuit, Reese Witherspoon, Sophia Vergara
This entry was posted on Saturday, August 8th, 2015 at 3:07 am and is filed under Herija Green, Movie Reviews. You can follow any responses to this entry through the RSS 2.0 feed. Both comments and pings are currently closed.