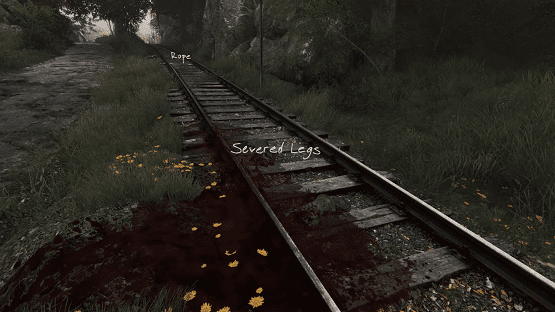 The Vanishing of Ethan Carter was a PC hit known for its challenging puzzles and eerie atmosphere. Now available on PlayStation 4, this first-person adventure game has been rebuilt in the Unreal4 engine. While there are improvements to the visuals and other technical specs, the core game is the same — and that’s a good thing.

There’s not a lot going on with Ethan Carter’s controls other than a few first-person standards. Fortunately, movement is crisp whether you’re crouching, walking or running (which is required for short segments in the game). It’s odd that you can’t jump given the varying terrain, but that never impedes on your progress through the game.

Rebuilt completely for the Unreal4 engine, the console version of Ethan Carter looks gorgeous — most of the time. The majority of the game has you looking at or going through environments, from a train tunnel to the wilderness to the dilapidated remains of a graveyard. These environments are all exquisitely modeled and the lighting is excellent for a PC adventure game port. While no one will mistake this for a AAA title, it’s clear that a lot of work has gone into the visuals.

They break down when you see an character models, however, usually through flashbacks or paranormal sequences. Both animation and quality come circa early PS3/Xbox 360, which can be a bit jarring.

Similarly, the audio is sparse but generally works when it’s crafted to create a creepy environment. The problem is with the actual voice acting — the gravely narrator is fine, but the other actors are hit and miss, especially young Ethan Carter.

The first thing you see when you start Ethan Carter is an advisory from the developers that this game will not hold your hand. There’s very little exposition, no advice on controls or what to do. You’re just thrown into the world to explore. There’s something intriguing about that, however, and those who have fond memories of titles like Myst and The 7th Guest will immediately click with this game.

If you’re not clued into ’90s puzzle/adventure PC games, Ethan Carter is broken up into 10 individual sections that help to unravel the, um, titular vanishing. These vary in difficulty, but you’ll definitely need to tap into your problem-solving skills to get through them.

There are few clues as to what your goal on each section is, though by the time you get through a few of them, you’ll have either rage quit (puzzles aren’t for you) or you’ll have established a sense of what to do.

Puzzles range from elaborate “find this object, put it here” adventure-game solutions to more obtuse thinking, such as listening for the direction/distance of a noise. Again, there are no directions telling you what to do, so gameplay largely revolves around putting the pieces together yourself.

This will no doubt quickly frustrate some gamers, but others will appreciate the sheer ambience involved with unraveling the experience. For the latter, Ethan Carter is done very, very well and tells a story that spirals downward quickly in a good and disturbing way — think Twin Peaks or X-Files in a 3-to-5 hour package.

Put your thinking cap on and immerse yourself in four hours of creepy atmospherics — The Vanishing of Ethan Carter is a fun, engaging and creepy mash-up of Myst and Twin Peaks.

By Mike Chen
Tags: The Vanishing of Ethan Carter, Video Game Review
This entry was posted on Friday, July 24th, 2015 at 1:26 am and is filed under Mike Chen, Video Game Reviews. You can follow any responses to this entry through the RSS 2.0 feed. Both comments and pings are currently closed.