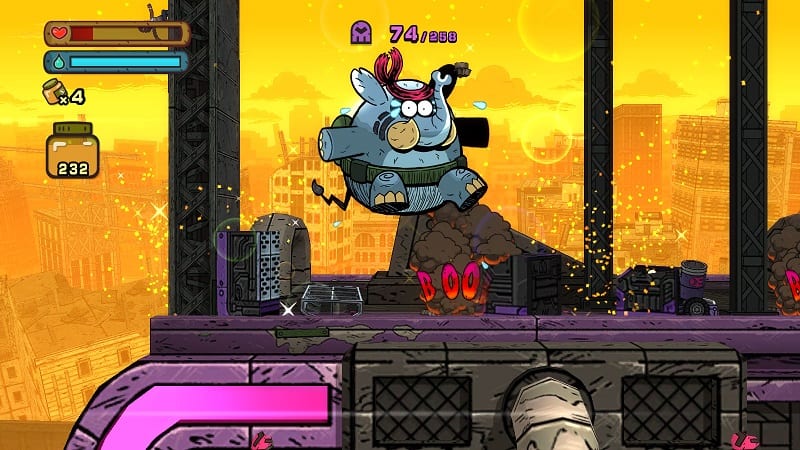 Tembo looks better in action than it does in screen shots.

It has been a very quiet year for SEGA. How quiet? Its only North American console release of 2015 was January’s Safe Haven DLC for Alien: Isolation. Until now, that is, as SEGA has teamed up with Game Freak, the folks behind Pokémon, to bring a new 2D side scroller (with no small hint of Sonic DNA) to the Xbox One and PlayStation 4 in Tembo the Badass Elephant. So let’s saddle up and see if this newcomer is worthy of us making a bad “tons of fun” joke.

In theory, the development team intended to keep things simple. Two buttons control all your moves — jumping, charging, sliding, etc. — while either the right shoulder or trigger sprays water from your trunk. The problem is that having the controls change contextually based on Tembo’s current action makes for too many mistakes in execution.

For example, holding down charge and then pushing jump sends Tembo on a long jump to cover larger distances or smash through walls. However, if you’re already slightly airborne and try to charge, you end up executing a bowling ball type of bouncing smash.

It’s not an issue when you have time to plan your action, or are facing one or two enemies, but when the game asks you to aim your hose, speed through a section or chain moves together to battle multiple foes at once it can lead to some controller wringing frustration.

There’s nothing here that can’t be worked around, but Tembo is set up to encourage playing through levels more than once to better your run times, and the finicky controls work in contrast to that rather than in conjunction with it. As such, they serve to hold the game back from what it could’ve been.

In terms of cuteness, Game Freak has all the bases covered. Tembo is adorably round, sporting a red headband and peanut saddlebags. His moves animate well, and smashing through various cars and walls is lots of fun. The environments look good too, though considering there aren’t that many of them it feels like more variety could’ve been implemented — multiple train-based levels, really? Still, it’s hard not to find the world that has been created to be endearing.

Cartoonish sound effects are the game’s main draw on the audio side with thumps, bumps and objects shattering into hundreds of pieces. The soundtrack doesn’t really move the needle one way or the other, to the point that we’d be hard pressed to hum even a few bars from our six-plus-hour journey.

A mysterious force, known as PHANTOM, has attacked Shell City, and the army must turn to its secret weapon to alter the tide of war. That secret weapon is you, Tembo, a headband-wearing, hostage-rescuing, PHANTOM-crushing pachyderm with more than a few tricks up your, uh, trunk. It’s a simple setup to be sure, but how much motivation do you really need in a game called Tembo the Badass Elephant to begin with?

There are three elements in play on each non-boss level: how fast you finish, how many of the 10 hostages you find/free and how much of the PHANTOM force you lay waste to. The first two elements have no bearing on advancement, existing purely to extend replay value, jockey for position on the leaderboards and earn some achievements/trophies. The third one, however, is needed to proceed as each level’s “dome” only unlocks after you’ve surpassed a specific point threshold.

If you’re at all thorough you shouldn’t have much difficulty destroying ample amounts of PHANTOM structures, vehicles and troops, but the levels are laid out in such a way that you can easily miss some of the branching paths. They can always be revisited, though, and it should be noted that all hostages must be found to reach the maximum score as each one is worth 10 points. Finding/destroying everything on a level is rarely easy, and it gets devilishly tough in the latter stages.

That brings us to one of our big complaints: uneven difficulty. While much of the game offers a solid challenge, there are parts of levels in which the aforementioned control issues come into play. This usually takes on the form of sections with multiple enemies all firing different projectiles at you or areas where a laser beam chases you and forces you to charge through at full speed. It’s here that the imprecise controls become a legitimate problem.

Despite being a massive elephant, Tembo isn’t particularly durable (and that doesn’t even count one-hit deaths like the laser beams or falling), which, combined with a general lack of health pickups, can lead to plenty of return trips to the last checkpoint. That assumes you’ve got lives remaining, which are earned by collecting peanuts — every 300 creates a jar of peanut butter that Tembo will consume when his health reaches zero. Run out and you’ll be sent back to base to restart the level with the game granting you five jars to start up again.

Even with some problems, we still blew through most of Tembo the Badass Elephant without ever running out of PB, but the last couple of bosses are notably cheap. They fill the screen with various kinds of projectiles that deflect off walls and/or track you, which makes dodging too much of an exercise in good fortune rather than a culmination of your skills and ability to decipher patterns.

There’s quite a bit to like about Tembo the Badass Elephant. It’s endearing and generally enjoyable to play, but tighter controls and better designed boss fights could’ve really elevated it. Here’s hoping it gets enough support to generate a sequel that addresses these issues.

By HC Green
Tags: Alien: Isolation, Safe Haven, SEGA, Tembo the Badass Elephant, Video Game Review
This entry was posted on Monday, July 20th, 2015 at 2:36 am and is filed under Herija Green, Video Game Reviews. You can follow any responses to this entry through the RSS 2.0 feed. Both comments and pings are currently closed.